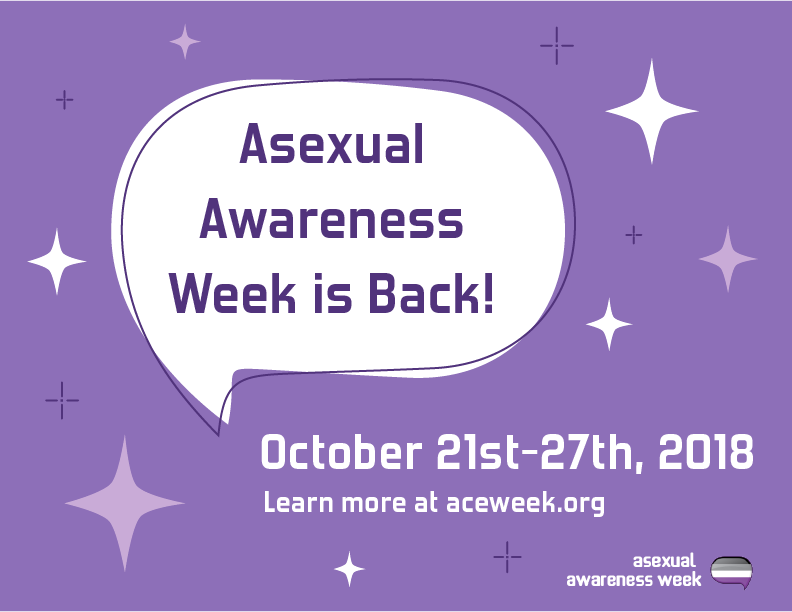 National Asexuality Awareness Week is upon us! One of the least represented members of the LGBTQ+ community, ACE people, or asexuals, make up roughly 1 percent of the population.

The organization, Asexual Awareness Week is working to educate the community on ACE members. Check out some pertinent Q&As from its website below.

What is an asexual person?

“An asexual person is someone who does not experience sexual attraction. Most individuals find there are certain people they are not sexually attracted to. For asexuals, this includes everybody!”

Is asexual another word for celibate?

“Unlike celibacy, which is a lifestyle choice, asexuality is a sexual orientation – just like homosexuality, bisexuality, and heterosexuality. Celibacy is a conscious decision not to have sex, regardless of sexual desire. Many asexuals do not consider themselves celibate, as they are giving up no more in abstaining from sex than a gay person is by abstaining from sex with someone of a different gender or a straight person is by abstaining from sex with the same gender. Furthermore, some asexual people do choose to have sex, and therefore are certainly not celibate.”

Are asexuals disgusted by the idea of sex?

“Some asexuals may be “repulsed” by sex, meaning they are personally averse to the idea of having sex themselves. Some are “indifferent”, meaning they do not mind having sex, despite experiencing no sexual attraction. The same variation exists in the non-asexual population: some sexual people are quite happy to have sex with someone they are not sexually attracted to, but for others this idea is unthinkable.”

Do asexuals have relationships?

“Just like anybody else, some asexual people desire relationships and some do not. An asexual person can find someone visually attractive (aesthetic attraction), be interested in someone romantically (romantic attraction) and fall in love, but these feelings do not have a sexual dimension.”

If a relationship is sexless, isn’t it just a friendship?

“For the majority of people, sex is regarded as what defines a romantic relationship, with love and sex being closely connected. On the whole asexuals don’t connect love and sex, since they don’t experience sexual attraction. Sex is just one way of expressing romantic love. Sex isn’t necessarily what separates love and friendship: some couples choose to be abstinent yet are romantically involved, and there are people who have sex whilst having no romantic connection. Just as sex can exist without love, love can exist without sex. Romantic love is an almost indescribable feeling and is felt and expressed in different ways by different people. No single way is right or more real than another.”

Why Don’t asexuals only date other asexuals?

“Although it may be easier for asexual people to date each other, people can’t control whom they fall for and, due to the current obscurity of asexuality and the small and scattered nature of our community, it can be very hard for asexuals to find one another, let alone a compatible asexual partner. Therefore, at present, it is more common for asexuals to find themselves in relationships with non-asexuals. “Mixed” relationships can be tough for both partners, but they can work, provided they are based on good communication, mutual respect, and understanding.”

Could it be that asexuals just haven’t met the right person yet?

“Some asexuals have tried engaging in sexual relationships, some more than once, whereas others have felt no need to try sex to verify their feelings. Although some asexuals might choose to experiment sexually, the majority of asexuals just know they don’t want sex with anyone.

Why is it important to raise awareness about asexuality?

“In a world where sex and relationships are everywhere, life for someone who has no instinct for those things can be very isolating, lonely and distressing.
Many asexuals feel “broken” because they do not experience the same wants and desires as “everybody else”. Many asexuals are haunted by feelings of shame and face harassment from peers because they don’t fit in. Many asexuals lead unhappy lives by trying to be ‘normal.’

By raising awareness about asexuality we hope to let people know that they are not alone, and that their feelings towards sex are nothing to be ashamed of. We want people to know that asexuality is a valid sexual orientation and not something to be cured. We want to help people feel pride in who they are and to know there are others out there just like them.

If more people know about asexuality, then more asexuals can find each other and build communities and lasting relationships from which they can draw comfort and support. Beyond the benefit that projects like AAW bring to the asexual community, asexual awareness can offer interesting insights to the rest of society about the nature of human sexuality and relationships. We hope to show that there are many other forms of love and relationships out there to enjoy!”