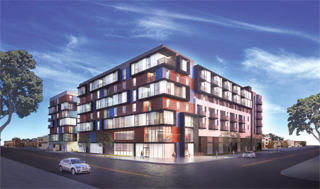 In an effort to combat soaring rents and gentrification, the California Strategic Growth Council (SGC) has awarded more than $16 million in funding to the West Hollywood Community Housing Corporation (WHCHC) to build affordable housing for low-income residents. The latest project will appear on Pico Boulevard, east of Vermont Avenue, and will include 92 units of affordable housing and social services offices.

The West Hollywood Community Housing Corporation is a nonprofit housing development corporation founded in 1989 to construct new apartments and renovate old buildings to “provide  affordable housing to lower-and-fixed-income people environmentally sustainable materials, systems and appliances that protect the environment.” Over its 22-year history, WHCHC has developed 17 apartment complexes, 14 of which are in the City of West Hollywood.

The development on Pico, called the Eden Elms, is meant to provide residents with an affordable living situation near to the places of work. Not only will this defray the cost of living and the burden of transportation, but it will also reduce the city’s carbon footprint. The $16.6 million awarded to WHCHC not only goes to the construction of Eden Elms, but also to repair and construct accessible walkways that would link the housing to public transportation.

“By integrating affordable homes and sustainable transportation, the Affordable Housing and Sustainable Communities program makes it easier for residents to drive less by making sure housing, jobs and key destinations are accessible by walking, biking and transit,” according to a statement announcing the project.

The California Strategic Growth Council has pursued an agenda of fighting climate change and addressing the housing crisis since it was created in 2008 by the state of California. According to SGC, they have invested over $775 million in projects that “that strengthen the economy, ensure social equity, and enhance environmental stewardship across the state.”

“With over $700 million in grants for housing and transportation projects that reduce greenhouse gas emissions, the Strategic Growth Council is helping make a difference in communities around the state,” said Ken Alex, SGC chair and director of the Governor’s Office of Planning and Research.

In addition to the money given to WHCHC, the SGC also awarded grants to projects in Long Beach and other parts of Los Angeles.