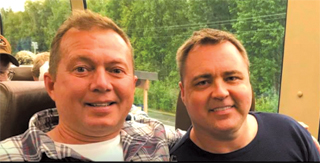 Best friends might go out together, watch dumb movies and cry together, or even sing terrible karaoke together. But serving on the city council? Definite points for creativity there.

Self-described “BFFs” Jack Cline and Eric Jon Schmidt both live in West Hollywood and have plans to create a better future for the city. Cline, who is a registered nurse as well as a part-time drag queen working under the name “Jackie (OMG),” joins his friend Schmidt in running a transparent campaign for a City Council seat in 2019.

Earlier this year, Schmidt got into a bit of trouble for posting nude photos on his website DudesNude.com.

While Cline will be running for his own seat on the council, he and Schmidt have expressed interest in campaigning for similar areas of social change, such as affordable housing for low-income WeHoans and homeless citizens and encouraging better city budgeting.

According to Cline’s email announcing his intention to run, he and Schmidt will focus on a variety of issues affecting the West Hollywood community, including:

“The health, wellbeing, quality of life and low-cost housing for seniors and low-income residents, making housing affordable, the over-development of West Hollywood, working on building a Sheriff Sub-Station on the Eastside, reviewing the city budget to ‘eliminate wasteful spending,’ and making the city’s response to homelessness ‘more effective and compassionate.’”