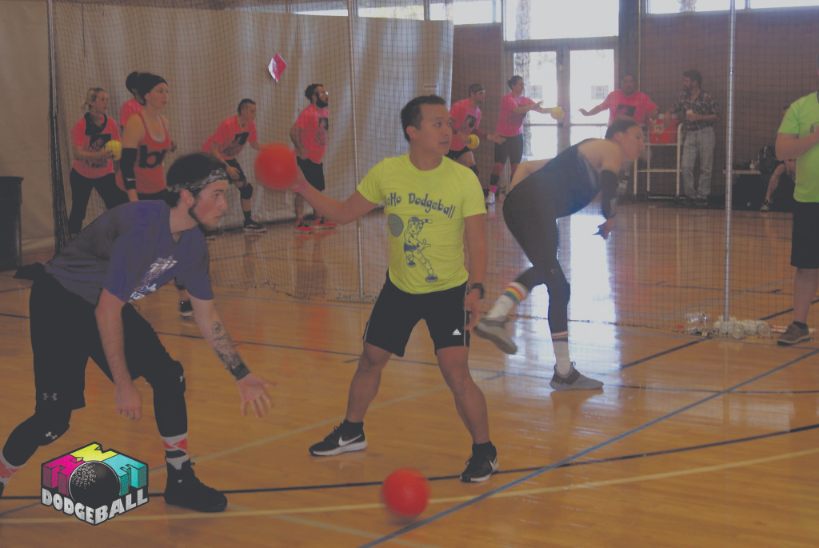 When I spoke with Ahn Phan, the manager of West Hollywood’s dodgeball league for LGBTQ+ players and allies, he’s wiped out from a grueling day of playoffs. “My body is broken!” he said, “I’m all disheveled!” For the past six years, Phan hasn’t just been a crucial part of West Hollywood’s LGBTQ+ competitive dodgeball league, he’s been held up as a pillar of the WeHo community, especially for newcomers looking to find their place in the city.  The team, which meets every Tuesday to “put on short shorts and knee pads, rock out to loud music, and throw balls at people,” meets outside the West Hollywood library and takes the party to Gym Bar after every match, fostering a new kind of community for LGBTQ+ adults. Phan himself plays with a herniated disk and partial hearing loss, and found in WeHo dodgeball a way to prove that the sport isn’t just about throwing balls around, it’s a way to throw down, get competitive, and build a lasting, tight-knit community in the heart of L.A. We spoke with Phan about how WeHo dodgeball is changing the way WeHoans think about sports for the better.

The Pride: How long has WeHo Dodgeball been around?

Ahn Phan (AP): Since 2012, I believe. WeHo Dodgeball was started by my friend Jake Mason, but he recruited me to be a league manager of WeHo Dodgeball. I’ve been with them for nearly five years now. I have a night dedicated that I manage every Tuesday. We have about 260 members of the LGBTQ+ community and our allies. We divide into 12 teams of about 20 people each, and we play right outside the West Hollywood Library.

What does the competition look like? Do you face off against other all-queer teams?

We don’t face off against other LGBTQ+ organizations at all, but there is a tournament that we participate in every January in Las Vegas. It’s called the Sin City Shootout. It’s athletes from all around the world and all different skill levels, and there’s an LGBTQ+ tournament with maybe 1,000 players from around the country and the world. Jake organizes it and I help out with logistics. It’s amazing, and I think the idea with us is that we want to foster a relationship between us and our allies and create a welcoming space for everybody. Especially with dodgeball, which is notorious for being a sport played by people who were non-athletes growing up.  So to be able to bring a more competitive side to it and to use it to bring people together is amazing.

Did the WeHo community take to the idea immediately?

I think most people in the beginning are fearful about the concept of dodgeball. You know, “oh, I don’t want to get hit in the face, I don’t want people throwing balls at me.” But I think we’ve done such a great job at fostering this community, because it’s not just about the dodgeball itself. It’s about going to the bars afterward on the strip, and getting to know one another. For example, yesterday was the marriage of two dodgeballers who met on the court. We’ve had a couple of those. The friendships that I’ve developed over the last few years have stemmed from meeting people on the court.  And that’s been the hesitation for a lot of people joining, a lot of people join not being sure about it, and they end up leaving with lots of friendships and even marriage.

What’s your personal relationship to dodgeball?

Growing up, dodgeball was one of my favorite sports. I’ve always had a knack for it. I grew up in Boston, but I didn’t really do dodgeball as an adult until I moved out here nine years ago. I came here with no friends, essentially, so I knew I wanted to put myself into the community a little bit more. So I joined a straight dodgeball league, and I met Jake Mason there. About a year later, he recruited me to join another dodgeball organization and help run the league. I did that for two years, and then Jake started WeHo dodgeball and brought me on to help. I’ve been with them ever since. We have a ton of people who have been with us since the beginning.

I also play dodgeball with a hearing loss, so I think that’s a different element. I’m not just a gay dodgeballer, I’m someone who’s partially deaf in one side and trying to blend in and compete with everyone else.

Do you guys do anything special for Pride?

We walk in the parade, and we built a float surrounded by nets. We throw balls at each other and actually bring the crowd in. We throw balls at the audience and make it a more interactive event. We also have a lot of events through the year like charity tournaments and a huge Halloween tournament which people love and get all dressed up for. This year we held a charity for a women’s shelter downtown.

So you’re super involved in the community.

I would say so! WeHo dodgeball has elevated me to a position where I’m viewed as this role model to people who want to get introduced to the WeHo community in general.  And I try to bring people in as much as I can.  I know what it’s like to be an outcast, so I just try to do my best to alleviate any anxiety that comes from people joining the league for the first time, or people who don’t know how to socialize as much as they’d like. I kind of bridge that gap.