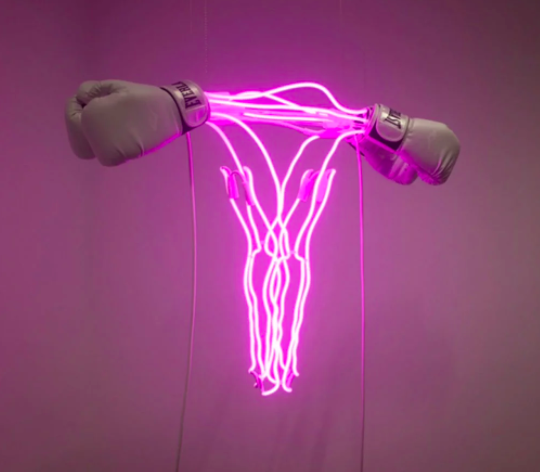 London-born Zoë Buckman, who has been living in New York for the past eleven years and who, up until 2017, was married to David Schwimmer, has set a new West Hollywood precedent with her latest display: a neon uterus.

Maybe it was Schwimmer who had a hand in inspiring “Champion,” the vaginal installation overtaking Sunset Boulevard and Sweetzer Avenue at the Standard Hotel (presented by the Art Production Fund) as of March 1. Or maybe we can give thanks to #MeToo movement for inspiring the piece. Whatever her reasons, Buckman has taken West Hollywood by storm with her installation.

While, in the past, decidedly phallic art has monopolized the nexus of West Hollywood (remember the penis imagery touted in the window of the now-defunct Andrew Christian store?), it seems fitting that Buckman’s piece, titled  “Champion” should kick off March: Women’s History Month. The piece follows Buckman’s usual style, which favors simple, minimalist lines in neon. The boxing gloves themselves are made of fiberglass. An original incarnation of the project utilized real gloves, but for the purposes of this large-scale installation, Buckman switched up the materials.

As she spoke of the motivation behind the piece to Los Angeles Magazine, Buckman explained, “Politically, as women, we were under threat, and that there was – and is – a war on us. There was a lot to fight for, and a lot that needed defending.”