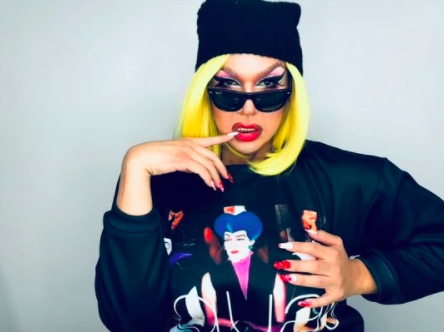 Integers have long seemed to rule VIZIN’s life. Starting with the number that once represented her weight: 703. That’s right, at one point 703 pounds while depressively eating her way into a numbing coma after having to move back in with her parents in 2008 after a failed attempt at escalating her drag career while also working a “survival” job in Bismarck, North Dakota, VIZIN was most definitely at what they call rock bottom (plus, one imagines it isn’t exactly “a cinch” – no weight pun intended – to draw too much encouragement for drag in such a milieu.)

After VIZIN’s mother urged her to see a doctor who could perform gastric bypass surgery, thereby saving her from certain death as a result of obesity, the singer felt more than just a physical weight remove itself from her body. With her new look, VIZIN regained something in place of the pounds: confidence. And that self-assurance led her to, once again, showcase her gift as a chanteuse – one that revealed itself as early as twelve years old when, as she recalled, she “shocked the entire school when I sang ‘Somewhere Over the Rainbow’ for a seventh-grade recital.” She added, “I remember some of my teachers telling me I had made them cry. After that, I just kept singing and knew I could always stand out that way. It was nice being known as a singer.”

Armed with a Native American background that adheres to the “two-spirit” philosophy – which refers to Native American tribes’ belief in a third gender, somewhere beyond and between male and female – VIZIN takes the stage with a “fake it until you make it” attitude. And, apparently, it’s that “fakeness” that’s gotten VIZIN back on track as one of the biggest names in drag right now. Need proof? Just check out the video for her latest single, “You Make Me Feel (Mighty Real),” with cameos from the likes of RuPaul’s Drag Race stars Manila Luzon and Mariah Balenciaga. VIZIN currently lives in West Hollywood, where children who loved to sing “Somewhere Over the Rainbow” have flocked since time immemorial.

To be sure, she’s come a long way from the couch at her parents’, but that doesn’t mean VIZIN doesn’t still take the time to have a healthy sob fest, well, every day because, as she puts it, “I think it’s healthy. And when I’m feeling down I take the time to reflect. I like to have my moments of reflection to gather my thoughts. I reflect on the big picture.” And the big picture is: VIZIN’s got a bright future ahead.