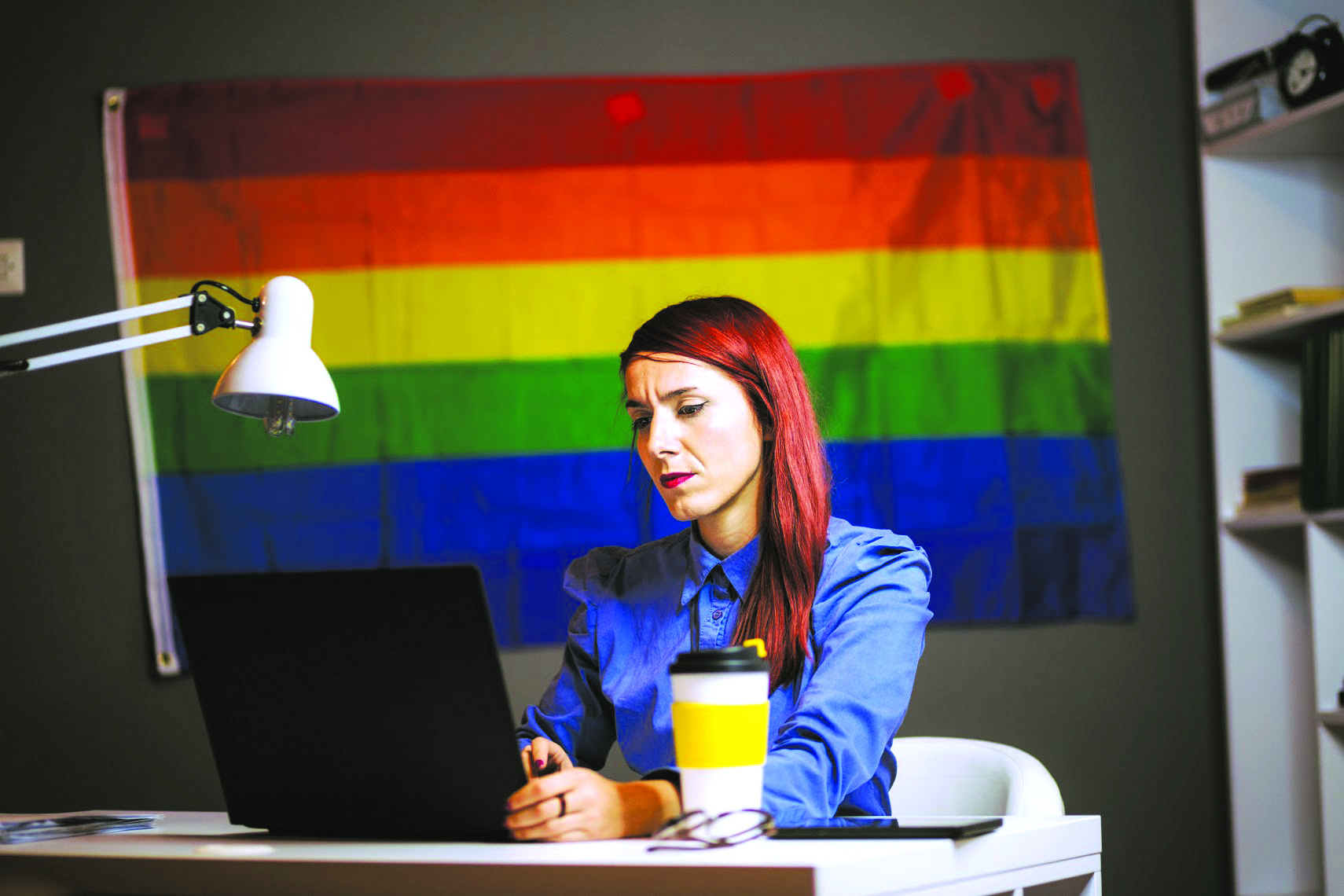 Being out and LGBTQ+ in the workforce can present a fair share of slippery issues – and that’s just if you’re trying to get a job and keep it. Try to bring more inclusive attitudes and policies into the workforce and you’re facing a whole new battle. When it comes to knowing how labor works, most Americans are woefully under-informed. Sure, we know some of the companies that treat workers well (Goldman Sachs, Intuit, AT&T, and many tech sector corporations that partner often with LGBTQ+ organizations) and others that aren’t quite up to snuff (WalMart, Blue Apron, and other million-dollar food warehouses.) But how much do we know about the actual data when it comes to being queer in the workplace? Many out LGBTQ+ employees enter a job only to be unceremoniously exited out in a few years with minimal benefits and a few cold words about the company being “Christian” or “Family-focused.” Last week, we spoke about Judith Dominguez and her wife Patricia Martinez, whose health coverage was retroactively taken away due to her company’s “Christian” ethics. Dominguez’s case is more common than most of us might think, especially when it comes to companies that are spread across the middle of the country.

OpenInvest began as an investment platform with a mission. For people looking to put their money into new businesses, OpenInvest began with the intention of helping investors know not just where their money is going, but how it’s being politically aligned. Building off of the data from the Corporate Equality Index released each year from the Human Rights Campaign, Levin and OpenInvest analyzed last year’s trends to try and figure out how and why certain companies across the United States are underserving the LGBTQ+ community in the workplace.

With California leading the way not only in terms of political visibility for LGBTQ+ workers, but worker’s rights overall, it’s up to us to keep larger companies accountable and to help newer, more inclusive companies to spread across the states. We spoke with Levin about the changing political tide when it comes to worker’s rights, and how we can do better when it comes to creating a better, more inclusive American workforce.

The Pride: Tell us a bit about how these studies were done and what criteria was used for this study.

We also considered additional research to help select the best companies. Not only do the 25 best companies for LGBTQ+ rights – including AT&T, Time Warner, Cisco, Estee Lauder, and Goldman Sachs – rank 100 on the CEI (Competitive Enterprise Institute,) they also have high climate change scores, are not in the tobacco or the private prison industry, and have at least 0.1 percent  or greater percentage of women in executive positions. Because of our issue screens and many research partners, we were able to create a comprehensive list of companies that support LGBTQ rights and other social values that help to create more inclusive workplaces.

The companies we ranked at the bottom – including Chipotle, H&R Block, Whole Foods, and Foot Locker – were based primarily on HRC’s scores, compared with the S&P500, and also considering some specific recent company scandals.

Did you find in your research that the best companies for LGBTQ+ rights had other significant similarities between them?

Yes, many of the top-rated companies shared important similarities. For example, most offer domestic partner benefits. They also rank high in fighting climate change, are not in the tobacco or private prison industry, and have at least 0.1% or greater percentage of women in executive positions. It was clear that these companies tended to demonstrate an overall commitment to social and environmental values.

How do you think the future of LGBTQ+ rights in the workplace will look in the next 10 to 15 years?

If the current political trends continue, the onus will increasingly be placed on the private sector to lead in supporting equal rights, health care, and other important issues for the community. Since large companies employ tens of thousands of people, the impact is immense. Unfortunately, while some corporate leaders are against the LGBTQ+ community, far more simply don’t see these issues as a priority. The onus then falls on the shareholders of these companies – you and me – to know where our money is going, to ask questions, and demand change. As we do this, companies will also do more reporting, and the increased data will create more pressure.

Our most powerful tools are to move our money (divest or invest) and to vote in our shareholder resolutions.

Have you noticed trends in certain states in terms of LGBTQ-friendly companies?

Only 19 states, including California, offer LGBTQ+ workplace protections. You can see a map of states on lgbtmaps.org, in the equality maps section. We’ve noticed that those 19 states generally have more LGBTQ+-supportive companies, especially California and New York. But there are plenty of large publicly traded companies in the South, Midwest, etc.. And nearly all large companies do business across the U.S., including in states that recently passed “Religious Freedom” laws. All these companies should be offering their LGBTQ+ employees protections.

For example, on October 10, there is a shareholder vote asking Proctor & Gamble (one of the largest companies in the world) to state what their policies are regarding how they will defend LGBT employees and their families against discrimination and harassment, particularly in states who have recently passed these discriminatory laws. CEOs technically work for their shareholders, and we all know that nothing is more powerful than hearing directly from the boss – you!

What change do you hope to see most over the next few years in terms of workers’ rights?

Over the next few years, we hope to see more clearly stated protections for U.S. workers, and more transparency around how laborers are treated in the supply chain. Furthermore, we are lacking data for actual diversity levels across companies’ workforces. The owners of companies – you and me, as shareholders – can start asking questions, which will lead to more data, which in turn allows us to push harder for change. However, there is already plenty of information to act on, including which companies lead on fighting human rights abuses in the supply chain, and we have added that theme as an option at OpenInvest. When investors act on these issues, companies listen.

Did you notice that certain companies had different policies for transgender employees?

Perhaps surprisingly, the HRC notes that some of the most significant progress in the past year has been a more widespread adoption of transgender employee policies. Close to 75 percent of the businesses in the benchmarking offer transgender inclusive health care coverage, which is remarkable considering it was 0 percent in 2002.

Yet while there have been some positive increases, half of the companies still don’t offer transgender-inclusive benefits. And of course, there are companies that have been mired in scandal. Both Bank of America Corp and Blue Cross Blue Shield of North Carolina were publicly involved in North Carolina’s HB142 bill, and stances like that certainly signal a lack of commitment to transgender inclusive policies and welfare.

The full list of best and worst companies for LGBTQ+ rights can be found at OpenInvest.co. More information can be found at the Human Rights Campaign’s website, www.hrc.org.