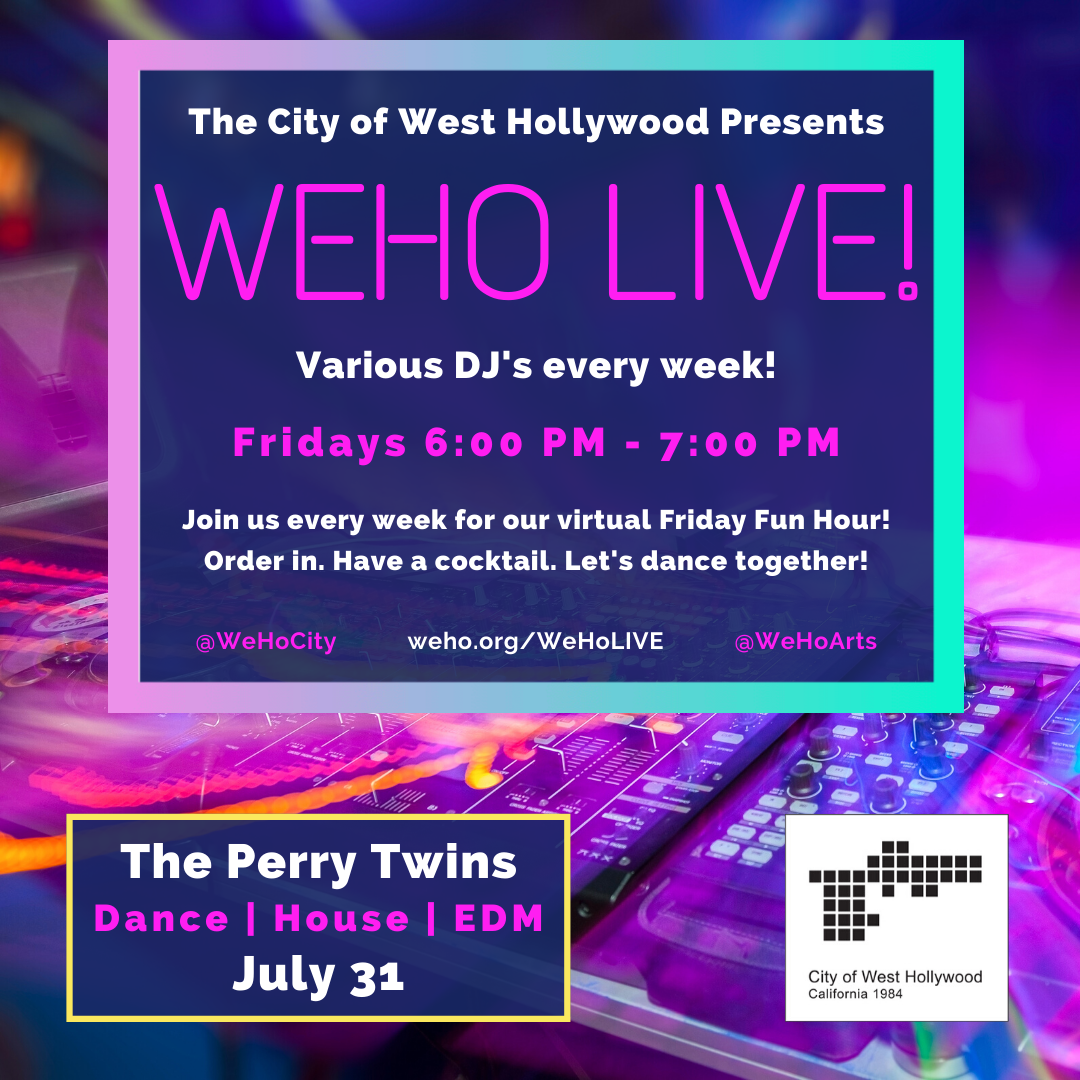 In the middle of a pandemic, people can’t help but feel disheartened, frustrated and melancholy. In an attempt to lift people’s spirits the City of West Hollywood is going to be doing a series called WeHo LIVE! A Virtual DJ music series, which takes place each Friday evening at 6 p.m. online all through September.

The virtual series continued on Friday, July 31, 2020 at 6 p.m. with The Perry Twins. The Perry Twins are identical twins based in Los Angeles and have played at the White Parties in Bangkok and Palm Springs, Winter Party Miami, NYC Pride Pier Dance, Infinita Madrid, and clubs, parties and pride festivals around the world. Doug & Derek spin regularly at The Chapel and The Abbey in West Hollywood. The Perry Twins have reached #1 on Billboard with songs they write and produce, as well as remixes they’ve produced for Calvin Harris, Dua Lipa, Janet Jackson, Troye Sivan, Jennifer Lopez, Beyoncé, Kelly Clarkson, Christina Aguilera and Rihanna.

Future events, dates and DJs are as follows:

Friday, August 7, 2020 at 6 p.m. will feature Lady Sinclair & Ian Sloane. Lady Sinclair is a much sought-after party DJ and producer booked her for her skills of creating the perfect vibe on the dance floor. Ian Sloane is a highly talented musician turned DJ who brings his mastery of music to his DJ performance. Together their DJ set becomes a show with handpicked, curated playlists and live instruments that create on-the-spot remixes, and pure energy.

Friday, August 14, 2020 at 6 p.m. will feature d. painter. An LA-based DJ by way of Washington DC, d. painter, has developed his brand working his way through clubs from Santa Monica to Downtown Los Angeles and weekly on the airwaves of KPFK 90.7 FM. He’s provided the soundtrack for A-list celebrity parties for the Kardashian family and sports legend David Beckham. As a promoter, he’s curated discrimination-free environments for anyone who wants to dance away their stress all night to Latin, disco, reggae, R&B, and house music.

Friday, August 28, 2020 at 6 p.m. will feature DJ JADABOO, the resident DJ for the R&B party 143 at the Echoplex. Her extensive music knowledge leaves no one out during her sets.

Friday, September 4, 2020 at 6 p.m. will feature DJ Ivan Mariscal. Ivan has been an active force in the LGBTQ community for more than 20 years, donating his DJ services to Pride festivals in Southern and Northern California. His current residences include Micky’s, Rocco’s, and Revolver Video Bar in West Hollywood and Rich’s in San Diego.