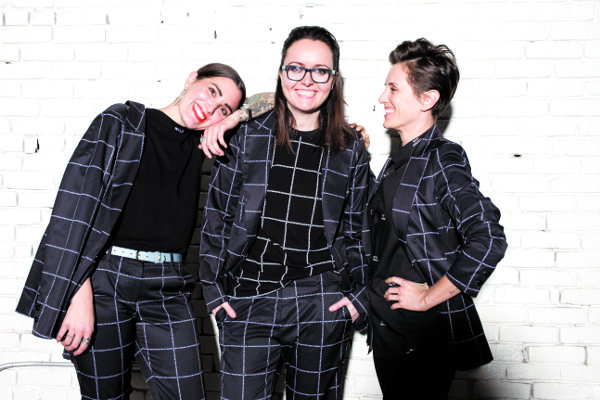 Wildfang. A clothing store-meets hangout spot, this feminist and queer-run business has been a part of the New York and Portland communities since 2013. And now, they’re ready to take on L.A.

“We exist to empower every kind of woman to be the best possible version of herself, smashing gender roles and the patriarchy in the process,” the Wildfang website states. “Sometimes this means giving her the confidence to rock a suit to the party. And other times it means supporting her in taking a stand against reproductive injustice, gender violence, labor inequality and, well, the current administration.”

About five yers ago, CEO Emma Mcilroy, COO Julia Parsley and Creative Director Taralyn Thuot quit their day jobs to pursue their dream of creating a “safe, supportive, inclusive and inspiring space for women everywhere.” Now the company has expanded to three storefronts with about 20 part-time and full-time employees. Wildfang has donated $400K so far this year and helped raise over $75,000 for charities last year.

To kick off the grand opening of the L.A. store, Wildfang is giving away free tattoos every Saturday in October, and tarot card readings on Sundays. Thursday, Oct. 18 was the store’s official launch party. The Pride L.A. spoke with Emma to see what Wildfang is doing fort the local queer community.

Tell me a little bit about yourself. What was your background before opening Wildfang?

I grew up in Northern Ireland and moved here 11 years ago. I moved here with Nike and my background is in brand marketing. I’m a brand nerd. I’m also sports obsessed so Nike was a pretty great fit for me.

How does identifying as a queer woman impact you as a business owner? Systemically vs. socially?

I’ve become a lot more outspoken about my identity and sexual orientation because I believe representation is one of the biggest problems we face. You can’t be what you can’t see and there aren’t a ton of queer role models in the business or corporate worlds. I definitely don’t “fit in” within the VC world and I don’t look or sound like most CEOs, but I’m passionate about opening a door for others to follow me. It can be a little lonely when you aren’t surrounded by your people and I think we probably work twice as hard, but ultimately it makes you bigger and stronger and you’re paving the way for more diverse leaders to come behind you.

What sets Wildfang out from other stores? Why expand to L.A.?

LA is a big market for us and we’ve been trying to find a space there for two years. Wildfang isn’t just a clothing store – we want to create a really inspiring space where you can be exactly who you want to be – whether you need some place to find a rad suit, or cry over a break up or maybe get a new feminist tattoo – we just want peeps to feel like they are safe and inspired and encouraged and loved to be themselves.

Why is it important to have clothing stores like Wildfang?

Clothing stores like Wildfang provide a safe space to be yourself and be your f*cking best. We give back (over $400k this year), we use our voice to say sh*t that needs to be said (F*ck trump) and we have your back.

Tell me a little bit about the month-long promotion… why offer free tattoos/tarot readings? What has the community response been like so far? How’d you find your tattoo artists/card readers?

All our artists and readers are local LA natives. We found rad feminist babes who do dope work – it’s that simple. we wanted to immediately give back to the LA community and say thank you for welcoming us. This felt like a cool way to give back and let people know that we’re here.