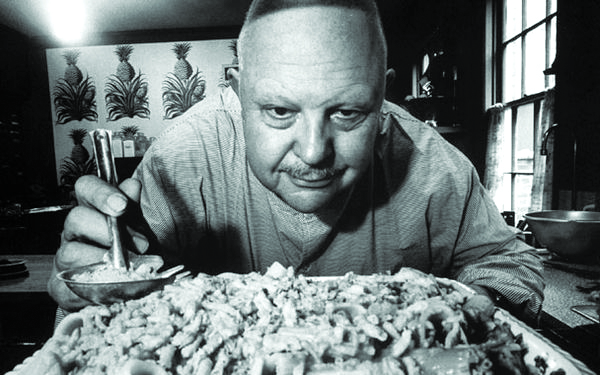 BY GENNA RIVIECCIO| Most of us have heard of the world-famous James Beard Foundation Awards, which annually highlight a ‘ who’s who’ of innovation and talent in the cuisine and restaurant world. Fewer of us know about the man behind the award.

A trailblazer in every way, James Beard was even the first to have his own cooking show all the way back in 1946, a fifteen to thirty-minute series aptly titled, I Love To Eat. And through it all, of course, were his cookbooks, of which he authored over twenty in his lifetime. A new documentary on Beard, titled “America’s First Foodie”, will have its LA premiere on May 19th, shining a light on the somewhat underexposed legacy of the influential gay chef.

The ‘gay’ point, is notable. In most of the discussion surrounding Beard, there is rarely any mention of his sexuality. Not that it should be a factor when considering the breadth and innovation of his work, but it’s a bit like not addressing the elephant in the room during an era when Liberace was suing British tabloids for libel for suggesting he was gay. It also can’t be said that Beard’s sexual orientation didn’t at least somewhat play into his knack for styling food and relishing it for its decadent potential. This is precisely what one new written biography about the legend–the first to be released since 1994–will play up in a way that’s never been done before. The book, currently in the process of being penned by Beard Award-winning food writer John Birdsall, will accent how Beard’s sexuality affected his career trajectory in being an offshoot of his focus on aesthetics at a time when no one else was, or even thought that such an approach could or should matter.

Fast forward to now, when every LA restaurant worth its salt (pun intended) spends time making sure each dish is as much an aesthetic experience as a gustatory one.

Hitting his stride at a time when beige food of a canned nature and TV dinners still reigned supreme in America, Beard’s influence was as epic as Julia Child suggested when she said: “In the beginning, there was Beard.”