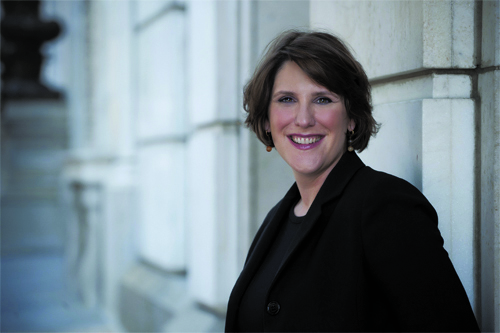 BY DOUG  MONTGOMERY| Once more undercutting his campaign promise to support the LGBTQ community, Donald Trump has appointed a notable anti-abortion activist with a long record of anti-LGBTQ statements.

On April 28, Trump appointed Charmaine Yoest as the assistant secretary of public affairs at the Department of Health and Human Services (HHS.) Yoest currently serves as a senior fellow at American Values and formerly served as the president of Americans United for Life, an anti-abortion group that has pushed for stricter restriction on abortion on the state level.

“Ms. Yoest has a long record of seeking to undermine women’s access to health care and safe, legal abortion by distorting the facts, and her selection shows yet again that this administration is pandering to extreme conservatives and ignoring the millions of men and women nationwide who support women’s constitutionally protected health care rights and don’t want to go backward,” Sen. Patty Murray (D-Wash.) said in a statement.

As soon as the appointment was announced, highly controversial statements began to disappear from Yoest’s blog. Critics accuse her of “scrubbing” her internet history of particularly problematic posts.

For instance, one entry, apparently written by her husband Jack, entitled “Half Of Rape Allegations Are False,” makes the demonstrably false claim that “when it comes to rape, women tell the truth about half the time.”

The post continues, arguing that police struggle to identify “who is the criminal the man or the woman? Either a rape has occured (sic.) Or a slander has occured (sic.) The police officer could flip a coin to determine truth with equal statistical probability.”

As long as she has been active in the public sphere, Yoest has promoted dangerous medical misinformation.

In a 1994 appearance on CNN & Company, Yoest argued that it was “absolutely insane” to suggest condoms were “good protection against HIV” because they “can fail up to 17 to 20 percent of the time in preventing the HIV virus.”

“It is unacceptable that someone with a history of promoting myths and false information about women’s health is appointed to a government position whose main responsibility is to provide the public with accurate and factual information,” added Dawn Laguens, executive Vice President of Planned Parenthood.

In other posts, Yoest and her husband offer openly homophobic commentary on current events, criticizing Wal-Mart for “homosexual activism” and claim that McDonald’s promotes “the homosexual lifestyle,” for example.

Even outside of the blog, Yoest has stood on an anti-LGBTQ platform, often citing discredited and false information to support her claims. In a discussion of same-sex adoption, Yoest wrongly claimed in 1997 that the “research is very clear that it is damaging psychologically to children to grow up in homosexual homes.” Years later, in 2006 Yoest doubled-down on this perspective, again incorrectly claiming that “two decades of social science research, … from across the right and left continuum,” has “emphasized the fact that it really is critical for a child to have both a mom and a dad.”

“It’s almost as if President Trump is trying to find people who say the most mean, spiteful, hateful things about transgender people to fill roles in his administration,” said Mara Keisling, the Executive Director of the National Center for Transgender Equality.