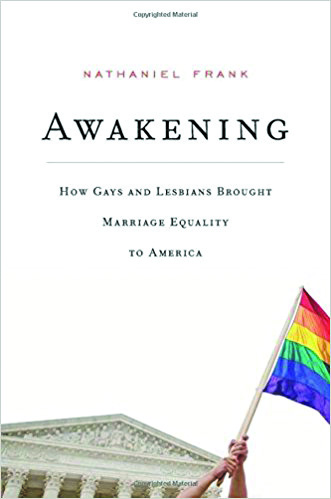 BY ANNETTE  SEMERDJIAN| Award-winning author Nathaniel Frank uncovers the history behind the political uprising of the LGBTQ community leading to the passing of equal marriage in the United States with his new book “Awakening: How Gays and Lesbians Brought Marriage Equality to America.” Although the 2008 elections were a huge win for the country with Barack Obama taking office, they were also a huge loss for equal rights with the passing of Proposition 8. Never did we expect that California would join the ranks of Florida and Arizona that year in celebrating a win for conservatives by banning marriage equality statewide. Even the county of Los Angeles had voted Yes to banning same-sex marriage on Prop 8. It was not only a huge shock to the LGBTQ community nationwide but also a huge wake-up call for political action.

It became suddenly apparent that people were not only indifferent about LGBTQ issues as we had thought but also very much against them, even in the blue state of California. The not-so-revealing revelation kicked the LGBTQ community and civil rights movement into high gear, as Frank depicts in his new book. It allowed LGBTQ folk across the nation to truly unleash conservative America’s biggest fear: the gay “agenda.” From celebrities to neighbors to local LGBT centers, people gathered in solidarity with repealing the hateful ban on equal marriage.

Frank explores the positive impact that the passing of Prop 8 had on the trajectory of equal rights for LGBTQ people. He recalls in a 2008 interview with grassroots organizer Matt Palazzolo for the New York Times where Palazzolo stated, “while we knew we’d been discriminated against in the past, we’d never felt it until now.” A new generation of protesters had risen up in light of their fellow citizens invalidating their marriages and banning their right to marry. Falsely thinking the trailblazers in the community had already paid their dues, the LGBTQ community began to continue laying pavement on the path to freedom from bigotry.

Frank hones in on what long-serving gay journalist Rex Wockner called “Stonewall 2.0.” He explains how the technology and social media of the new decade worked in favor for rallying together protesters for LGBTQ rights. Grassroots movements were the new wave allowing LGBTQ people of all walks of life to take agency in the power to fight for one’s own right instead of relying on major organizations to represent them.

Frank’s new book comes at a time when the country has taken a hit from the election of Donald Trump much like the LGBTQ community did in 2008. As the people of the United States rise to revolt, they take yet another page from LGBTQ people who rose to action for marriage equality.

“Awakening: How Gays and Lesbians Brought Marriage Equality to America” by Nathaniel Frank is now available for purchase.