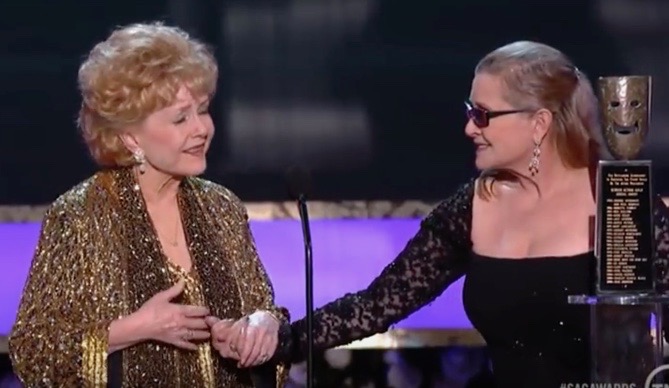 BY KAREN OCAMB  |  The LGBT community—reeling from the deaths of icons George Michael and Carrie Fisher and AIDS Project Los Angeles co-founder Matt Redman—was stunned again Wednesday by the news that Fisher’s funny and vivacious mother, Debbie Reynolds, died the day after her daughter. Reynolds’ son Todd told the Associated Press that she died of a broken heart saying “I want to be with Carrie” moments before she died.

Reynolds’ long and tumultuous career includes the gossip scandal of 1958 when pop singer Eddie Fisher, the husband of the “girl next door,” left her for sexy actress Elizabeth Taylor. Reynolds and Taylor later reconciled their ‘50s friendship, even having dinner with her second husband and Taylor and Taylor’s next husband, Richard Burton.

In 2001, Reynolds and Taylor starred with Shirley MacLaine and Joan Collins in the made-for-TV movie, “These Old Broads,” written by Carrie Fisher. Another interesting note in the less-than-six-degrees-of-separation relationship between Reynolds and Taylor is that Reynolds was an AIDS activist before Taylor. In fact, along with comedienne Joan Rivers, singer/actress Rita Moreno, and actor Robert Guillaume, Reynolds was among the first of the Hollywood celebrities to publicly appear in AIDS fundraisers at a time when HIV/AIDS was still a mysterious killer and gay men with AIDS were labeled lepers.

In 1983, Reynolds performed at an AIDS fundraiser with friend and Hollywood rival Shirley MacLaine. In fact, it was MacLaine who was slated to play Molly Brown in the 1964 MGM film version of the Broadway musical, The Unsinkable Molly Brown. But Reynolds not only got the part but won an Oscar nomination, as well. Three decades later, Reynolds sought to play Doris Mann in the 1990 screen adaptation of Fisher’s 1987 semi-autobiographical novel about addiction and a mother-daughter relationship in Postcards from the Edge. In her memoir, Unsinkable, when Reynolds asked director Mike Nichols if she could read for the role, he told her, “You’re not right for the part.” To which Reynolds replied: “Excuse me? I’m not right to play myself, a part that I’d been creating—admittedly, unwittingly–for my daughter for decades?”

In his book “And The Band Played On” about the beginning of the AIDS crisis, Randy Shilts wrote about that June 23, 1983 AIDS fundraiser in San Francisco: “The fund-raiser for the National KS/AIDS foundation had all the raciness of a true San Francisco event. When host Debbie Reynolds introduced the surprise guest, actress Shirley MacLaine, with the comment that MacLaine had great legs, MacLaine responded by pulling down the top of her long strapless gown, demonstrating that she had other equipment to match. The crowd cheered enthusiastically: “We love you, Shirley!” Not to be outdone, Reynolds lifted the rear of her slitted gown to reveal her brief black underwear.

“Debbie’s ‘Tammy’ image is blown forever,” sighed one realtor in the audience.”

On August 28,1983, Reynolds appeared with comic Rip Taylor at the first AIDS benefit in Los Angeles at the Hollywood Bowl.

Though Elizabeth Taylor eclipsed Reynolds in the AIDS activist/fundraising world after the AIDS death of Taylor’s dear friend Rock Hudson, Reynolds was known to always be available, without perks, to lend her name and talent to fighting the AIDS epidemic. And her fondness for the gays never disappeared either, landing the role as Kevin Kline’s mother in the satirical 1997 film “In & Out,” and playing her Emmy-nominated role as Deborah Messing’s eccentric mother in NBC’s “Will & Grace.” Her last role was Liberace’s mother in the 2013 HBO movie “Behind the Candelabra.”

“She has been more of a mother to me – not much. But definitely more. She’s been an unsolicited stylist, interior decorator, and marriage counselor,” said Fisher to much laughter. “This is an extraordinarily kind, generous, gifted funny woman who would give you the shirt off her back—if Vivian Leigh hadn’t once worn it in ‘Gone with the Wind.’”

It’s a sentiment shared by members of the LGBT community who remember Reynolds’ kindness and generosity to people living with and dying from HIV/AIDS at a time when it took courage to put her career at risk and bring laughter and joy to others.

This video of her SAG Award includes clips from “In & Out,” “Behind the Candelabra,” and “Will & Grace” – “Look, look – no panty line because…no panties,” she tells TV daughter Debra Messing. Carrie Fisher’s introduction starts at 1:50 into the video: