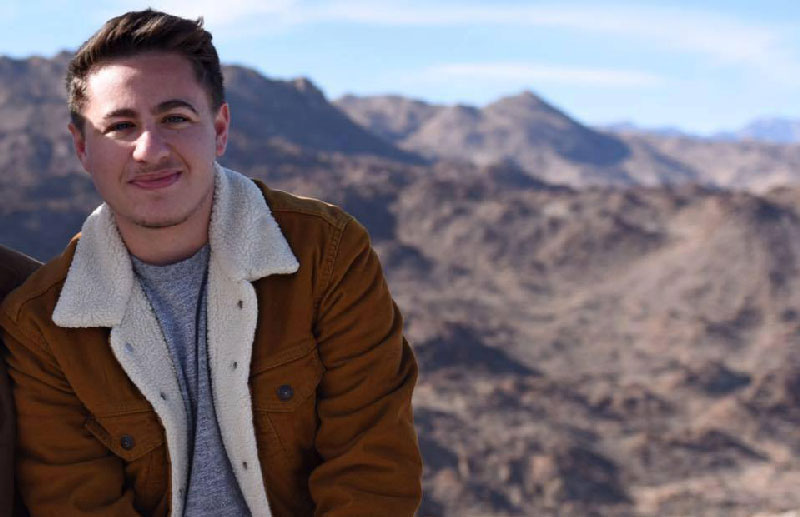 BY STEVE WEINSTEIN  |   The past year has been a whirlwind for Alex Schmider. From cavorting with Miley Cyrus for a photo shoot for her Happy Hippie Foundation, which led to his co-introducing her at the Los Angeles LGBT Center, to helping introduce Caitlyn Jenner in a Glamour Woman of the Year Award video, he even starred in an TV ad featuring himself talking about his mother, as she tearfully watches and ends with an emotional reunion for Hallmark.

The PrideLA caught up with Schmider as he was returning from a well-earned vacation in Canada during a brief respite between jobs. Most recently in the Communications Department at the Los Angeles LGBT Center, he has taken on a newposition as Senior Strategist, Transgender Media at GLAAD, a major LGBT organization whose focus in on accelerating acceptance through media and education.

The position seems a logical next step for this extraordinary 26 year old, whose personal journey of self-acceptance as a transman has long inspired work with transyouth, including a longtime stint as a camp counselor at Camp Aranu’tiq, an overnight camp for gender non-conforming kids.

“One of the reasons I’m so excited to start my work there is that there has been so much emphasis on transpeople,” he says. “Even within the past few years there has been such progress, people are willing and want to learn. As language evolves, the movement evolves. This is really important for the trans community and our allies in the media.”

He’s confident media organizations appear receptive, even eager, to work with him. At Teen Vogue, for example, part of the powerful Condé Nast magazine group, “they really want to get it right. And it’s so important how transpeople are reflected and portrayed in the media.”

He sees his increasing visibility as part of the journey of the trans community as a whole: “It is so important for those who can be visible to be visible. It’s how the gay movement has made such strides. People knew gay people. We’re a very, very small population. How do we get people to know us?”

That’s why he sees the current brouhaha over bathrooms as presenting an opportunity for education — and the positive response by so many people as showing what strides have been taken over the past few years.

For Schmider, the most important thing is keeping eyes on the prize — and “more than ever, transpeople be treated with respect.”

What continues to inform Schmider is his work at the camp which “is just about letting kids be kids. As we move beyond labels of gender and sexuality, it’s so important that everyone be treated as who they are.”