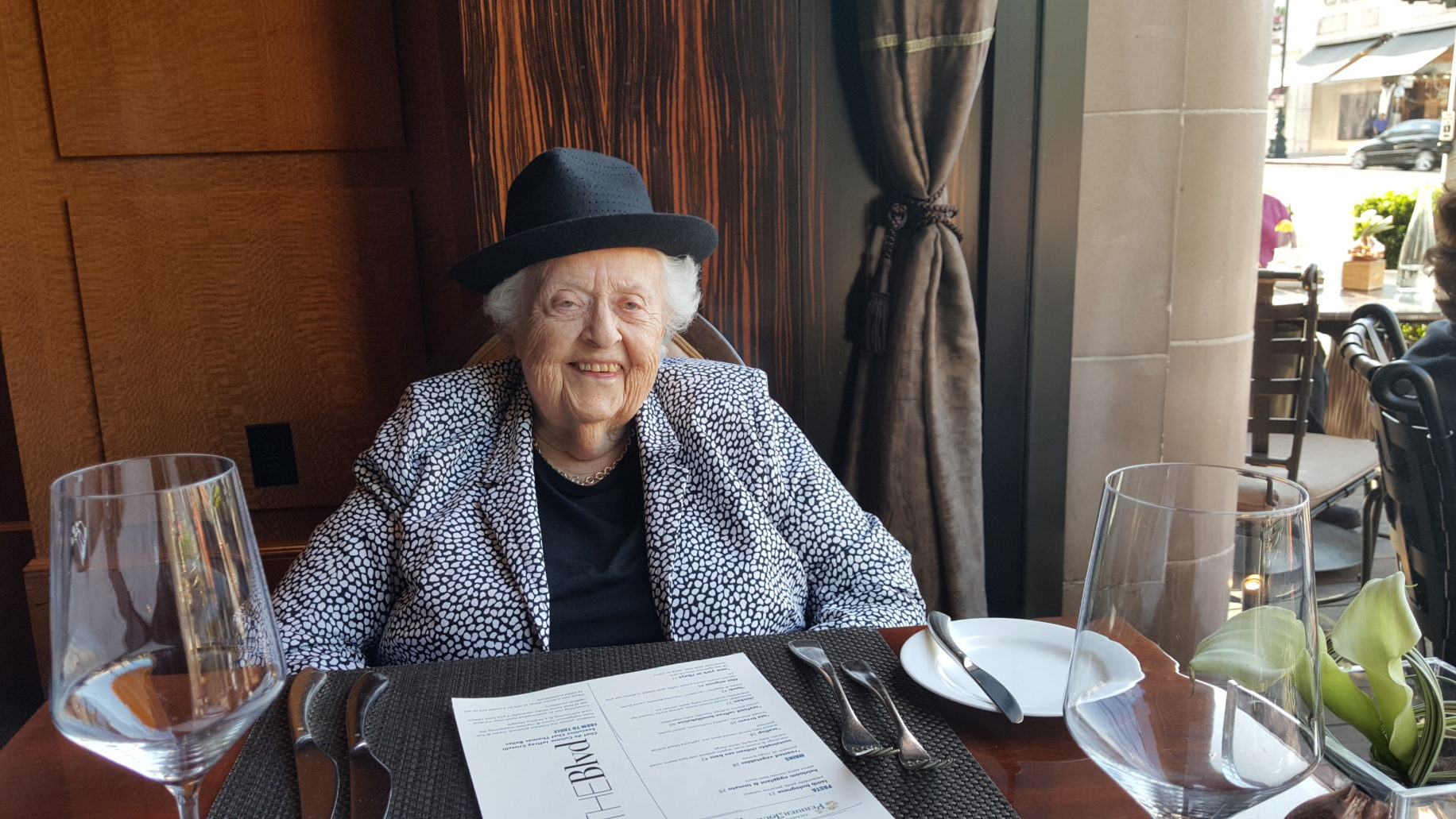 Ivy was born on August 15, 1926 and at a very early age she was so captivated by Charles Lindbergh’s transatlantic flight that she named her dog “Lindy Up in the Airplane.”  She has been captivated since by imagery and meaning and has spent a lifetime working on the intersections of activism and art.

Celebrations are in the works, according to a source who requested that details be held until afterward.  The Pride LA invites readers to make Facebook shout outs to Ivy at the bottom of this page for inclusion in the article.

She’s a pioneering and proud lesbian who continues to use her visual thinking to influence narratives and her insight to nurture her community.  She has a mother’s touch (she has two daughters) and a love of nuance that makes her a keen observer —  and she isn’t the slightest bit shy about making a public diagnosis.

At 90 years old Ivy remains as relevant as ever.

In recent weeks, as Christopher Street West was roiled by questions about its management of LA Pride, Ivy’s laser like questions drove the discussion. She blasted West Hollywood City Council for its lack of oversight, asking “How could the festival become a music festival without knowledge of this body? I’d like to know: who is running CSW? Is it a one-man show? A two-man show? The board should be making decisions.  Are they doing that?  Or has the head of the organization suddenly decided it’s his organization?”

As a recipient of the organization’s 2007 Morris Kight award, the top recognition once given by Christopher Street West board, her concerns carried considerable weight.

Ivy has a powerful track record as a progressive activist that began in 1968. She embraced her lesbian identity and quickly became a leading feminist voice, establishing and serving as president of the New York Chapter of the National Organization for Women.

Her actions heralded a new brand “in-your-face activism” that preceded the Lesbian Avengers,
ACT UP and Queer Nation, even blending her love of strong visuals with powerful messaging. She organized an action at the Statue of Liberty, draping a 40’ banner over the world famous icon that read “Women of the World Unite,” garnering global media attention. Using her graphic design skills she published The NOW York Times, a parody of the powerful New York Times in an effort to combat the paper’s sexism.  She collaborated with many other groups to draw tens of thousands of protestors, overtaking Fifth Avenue in 1970 for the Women’s Equality march, months after Troy Perry, Morris Kight and Bob Humphries had taken Hollywood Boulevard for the first gay pride parade in Los Angeles.

Ivy left New York behind in 1971, moving to Los Angeles where she studied acting and later toured the U.S.  performing her one-woman show “The Many Faces of Woman.” But activism was in her blood and the then nascent Los Angeles Gay and Lesbian Community Services Center recruited her back to action.

LGBT visibility was drawing a backlash and Ivy, with Morris Kight, successfully organized California’s LGBT activists and rights groups in an effort to defeat The Briggs Amendment, legislation that would have prohibited gay men and lesbians from teaching in public schools. The “No on 6” campaign employed strategies activists would later copy to defeat Prop 8.

Her successful organizing was recognized by Governor Jerry Brown and she became the first out gay person empaneled onto a state board as Commissioner for the California Commission on Aging.

In the early 1980s, after caring for a friend with AIDS who died of Karposi’s Sarcoma, Ivy turned her attention to the AIDS crisis. She co-founded Los Angeles’ first AIDS service organization, AIDS Network LA, a news and information service that provided an invaluable model that was copied nationwide. She became a prevention advocate and helped establish APLA. She also helped defeat a move to quarantine people with AIDS.

Ivy has never slowed down. She served on West Hollywood’s Lesbian and Gay Advisory Board until recently. She helped shed light on the Crystal Meth crisis, domestic abuse and senior issues.  She worked to obtain a visionary grant that established the nation’s first LGBT senior housing complex.

Bottini was recently hospitalized after a fall at Pacific Design Center where she had attended a CSW board meeting, calling the board a “lame duck.”