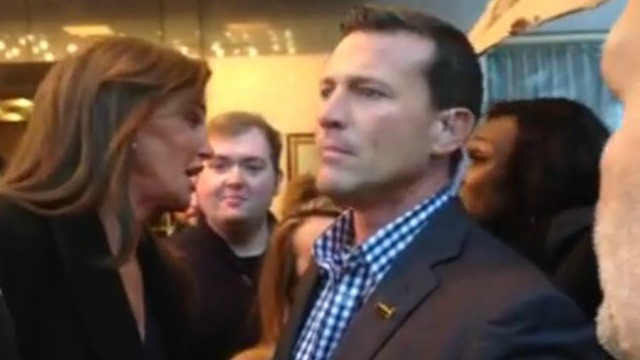 Caitlyn Jenner was forced to face the music of a long simmering undercurrent of transgender community rage as I Am Cait met I Ain’t Cait in the streets of Chicago.

More than 1,000 people attended the 7th annual Speaker Series for the Chicago House, an LGBT and AIDS social services organization where Caitlyn was the featured speaker.   Proceeds from the event benefit Chicago House’s Trans Life Center.

As she exited the luncheon Jenner was confronted by local trans people.

“The chaos outside was a great contrast to the uplifting atmosphere inside where Caitlyn had just given her speech,” B96 Chicago radio personality Showbiz Shelly, who witnessed the confrontation, told Entertainment Tonight.

The group, who dubbed their protest “I Ain’t Cait” on Facebook, take issue with Jenner’s privilege.

“Who, you may ask, did they select to speak on the issues facing trans people and especially trans women in our city? Caitlyn Jenner, who lives in a mansion and has a net worth of millions of dollars, while the average trans person has a 41 percent chance of experiencing homelessness and a nearly 50 percent chance of living off less than $10k per year.”

“Caitlyn Jenner, who said in a segment on her hit new reality TV series I Am Cait, regarding people who rely on social services to get by: ‘You don’t want people to get totally dependent on it. That’s when they get into trouble. ‘Why should I work? You know, I’ve got a few bucks, I’ve got my room paid for,’”.

An organizer of the protest, Temara “Jaz” Robinson wrote:

“caitlyn jenner literally makes me feel suicidal. This person is pretending to be trans for media attention. I hate this person’s whiteness, this person’s big meaty man voice, this person’s history of sexism and impregnating women (because all women stick their penis in someone and leave the children behind to become media trash stars). I hate this person’s tv show. I hate this person’s stupid magazine cover, and most of all, i hate the Chicago house for thinking that this is representative of trans people. jenner is a men’s right’s activist and deadbeat dad who is cashing in on media hype arond trans people. I DO NOT accept this person as a woman, trans or anything else. I”m going to be going off about this in the lobby and/or out front theatrically. If you have a problem with this, stay at home. Some people have actually had to suffer for being trans, not jenner. The Chicago house thinks trans people are just some frivolous dumbasses who want to wear pretty dresses. It’s about way more than that, at least for me and most other trans people who were around before the era of terrible action dudebro movie directors becoming women, walmart core rockstars becoming women, and terrible shows that make prison seem like summer camp. Liberation, not representation. I hate you jenner, and anyone who thinks that this person deserves support for their “courage”is transphobic. Im not that guy fuck that.

this person’s success is derived from white male privelege, then they appropriate an identity of trans people for a little dressup game media circus,and the nonprofit industrial complex eats this shit up. It’s so fitting. Rich guy helps make money for the social service organization that goes out of business if we actually eradicated homelessness. All of this is a frace of capitalism, racism and male supremacy.

This action is going to be sketchy as fuck. Just warning you. No thousand dollar sound system, no george sorors grant to fund us, no spineless, quid pro quo pushing political groups to “endorse us”, this is just some pissed off trans people who see right through the nonprofit industrial complex ego circle jerk and this trans-trender bruce jenner”

“Instead of allowing the trolling of people who obviously have no idea what this action was about, and who want to pick at a few words and phrases that i said and say i’m just transphbic,l i’m going to post one more time a rundown of our messaging here and pin it. People who attended, and those who have been around me in an organizing or on a personal level understand that this is bullshit. Again, here is the full context of our message

“A nonprofit industrial complex, fuled by white male and daddy tranny egos, one that only seeks to perpetuate itself (that has overspent tokenized black trans women employees, paying part time, minimum wage hours) while paying CEOs nearly half a million dollars when there are more empty housing units in in xicago than there are homeless people, cannot exit if homelessness were eradicated.What have you bought into? what will it take to buy you out?

I present to anyone who will take it, a check, blank, paid to the order of “your white guilt”

Jenner, you took the male privelege train to the last stop and bought a ticket back out of boredom. The publicity and frivoloty of your transition insults the process of trans people geuinely breaking the violent gender biinary, as well as the women born female who you despise.

you insult women and trans people with your appropriation, your media spectacle, and your hatred for sickening, and the fact that the chicago house will pander to this, while paying their ceo six figures and expecting black trans womento take crumbs from the cookies we bake you.

This is the start of a new trans movement. An anti-racist, anti-colonialst, pro woman, trans movement that doesn’t take its orders from nonprofits, bilionare liberals or the state and doesn’t pander to an audence that would rather lazily bing watch us in prison than concieve for one moment of world were our bodily autonomy, self-definition, and freedom from violence and oppression are non-negotiable

To these queer and trans people i see walking out here, why were you inside there? Why would you rather see us pander to the systems that harm us for crumbs while we hand them cookies for not killing us (at least not right away)

Jenner’s purse has never matched her shoes.  Her politics are famously out of step with her identity and surely are responsible for his many fits and starts along the road to being open about his gender preference.

Jenner revealed that she wants to meet a man who will treat her like a “normal woman.”