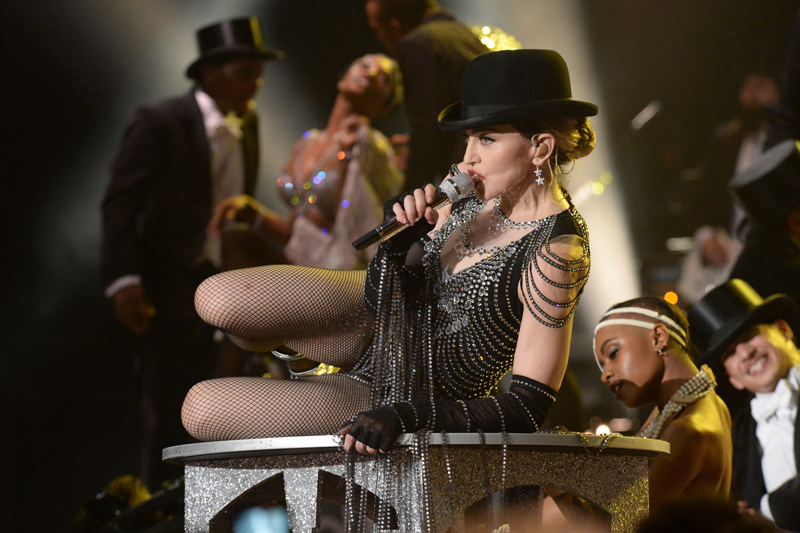 The queens at the Madonna Bar in WeHo are already screeching: The Mistress of reinvention lands in LA for her October 27 concert at the legendary Forum, so we thought it might be a good community service to list 11 tunes we expect the Material Girl to treat us to, anthems of a generation of gay men….make that generations.

Oh, be still my gay heart.

Madonna’s latest spectacle, Rebel Heart Tour, spotlights her 13th studio album of the same name, she reaches into her back pocket..and it really is all sweet… not sticky. And nostalgic.

Gays, we have so much to be thankful for.

‘True Blue’
“Baby, I love you,” Madonna gushed, dipping into her back catalog for this adorable 1985 relic. Stripped of its pop sheen, “True Blue” became a finger-snappin’, hand-clappin’ campfire sing-along, with Madonna plucking away at a ukulele. Yes, baby, we love you too.

‘Deeper and Deeper’
In 2004, for the Re-Invention World Tour, she took her great disco rave from 1992’s _Erotica_ to the cabaret, quieting it down for a lounge-style slowie. Not this time. For Rebel Heart, “Deeper and Deeper” retained its original pulse, dizzying the crowd of queers with its dance spins as Madge and her crew worked the heart-capped catwalk with a voguish hustle.

‘Burning Up’
Flame bursts boomed from behind Madonna on a towering backdrop, but the diva herself was the one bringing the heat. As she punched her electric guitar, transforming this 1983 fan favorite into a rockin’ rush, someone probably should’ve called 911.

‘Like a Virgin’
Bitch, she’s Madonna. Owning the stage like a boss during a solo hip-hop take on “Like a Virgin,” Madonna bounced her booty during a ravishing display of agelessness – proof that Pilates and full-powered Beyoncé-type fans are a girl’s best friends.

‘La Isla Bonita’
Toro, toro! No, there wasn’t a bull, and this wasn’t “Take a Bow” (sigh). Hand to pelvis, Madonna moved to the Spanish vibes of “La Isla Bonita,” showing off her slow mo gyrations amidst her festively-attired stage gang who came together for a performance that was muy bien.

‘Dress You Up’
If Madonna wants to spoil us, who are we to argue? Not only did “Dress You Up” (in full!) make the cut, but the diva went deep into the ’80s for “Into the Groove” and “Lucky Star,” essentially giving life to all basking in her presence. #Humanitarian

‘Who’s that Girl’
Dusting off the title song from her 1987 film, Who’s that Girl, Madonna gave this ditty a guitar-guided makeover – nearly 30 years after last performing it on tour! Despite the fact that Madonna was actually there, donning gypsy attire and taking our collective breath away, it was hard to tell if this was real life.

‘Frozen’
This used to be her playground, which Madonna enthused during her hometown stop, proclaiming that, “Detroit made me who I am today.” And she didn’t stop there. She swapped set-list staple “Ghost Town” for “Frozen,” her stunning Ray of Light-era trip to the dark side, stripped to merely the rawness of acoustic guitar and a vocal that left everyone, well, you guessed it: frozen.

‘Material Girl’
Raise your hand if you wet yourself during this one. Beyond the obvious fact that “Material Girl” sits atop Madonna’s smoldering hit heap, the way she folded it into Rebel Heart – simple, chic, Great Gatsby-inspired – was pure blast-from-the-past pleasure.

‘Holiday’
It didn’t take this, the encore, to know that Madonna had let her hair down again, ditching brooding theatrics for the essence of early Madonna: frilly fun. Rebel Heart Tour was a two-hour plus celebration of Madonna’s career, and it all came to a boisterous, confetti-filled head with “Holiday.”