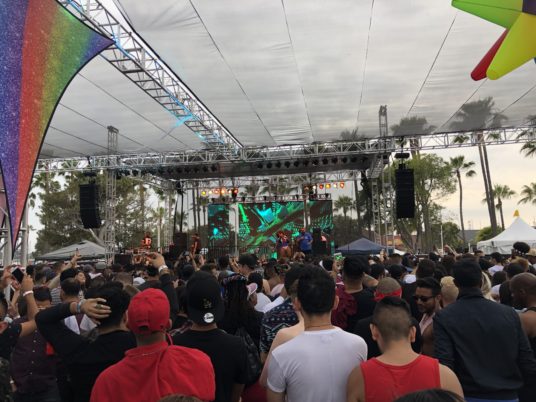 Long Beach Pride is getting a fresh coat of rebranding this year.

Celebrating its 36th anniversary with the theme “Millions of Moments of Pride, Celebrating the 50th Anniversary of Stonewall”, Long Beach Lesbian & Gay Pride has begun the process of rebranding the festival. Most notably, LBLGP, the nonprofit that organizes the two day festival and parade has begun seeking corporate sponsorship for the stages at the festival. The future goal with the rebranding of the stages, according to a press release, is to assist with financially securing entertainment artist that are not currently within the scope of the Long Beach Pride’s budget.

“This year, we welcome Anheuser-Busch, who has renamed the Fiesta Caliente Stage to the Estrella Jalisco Stage, and Nissan North America, Inc., who has renamed the Urban Soul and Main Stage, combined to create the Nissan Stage”, said Denise Newman, President of Long Beach Pride. “We need to continue to keep this event prosperous so that we can carry on the support to the LGBTQ+ community service organizations that heals us, provides the basic services that are sometimes denied to us and that fights for our right to be human”, continued Newman.

In line with rebranding, Long Beach Pride has also reduced the festival footprint to create a more intimate setting.  The exploratory process will bring the festival grounds alive by adding color and providing interactive games on the festival grounds to coincide with the entertainment stages, vendors and food courts.

The stage will come to life with headliner Aina Brei’ Yon.  Self defined as a creator of experiences, Aina’s talent of using her music to tell her stories gave her the opportunity to open for artist such as J. Holiday, Talib Kweli, Soulja Boy and many others.  DJ Starlett, the first lesbian DJ to be presented in any Playboy Magazine, DJ2lips who became the first On Air DJ for the Los Angeles radio station Mega 96.3, DJ Romeo from 93.5 KDay morning show.  On Sunday, the stage will feature headliners Big Freedia, Ada Vox, Whitney Mixer & Mishelle, Sabrina La’Blanc & Carletta Courture who will host the Stone Wall Block Party.

Saturday features headliners Pablo Montero who has had a solid career as a singer, as well as in the environment of telenovelas and Marjorie De Sousa known worldwide for her villain roles in telenovelas has recently release the song Un Poquito Tuya.

Sunday the Estralla Jalisco stage will welcome Diana Reyes.  Ms. Reyes has been singing since she was 8-years old.  Over the successful span of her career she has recorded 3-Gold Albums.

Slide on your jeans, tug on those boots and grab your hat and get ready to hit the Country stage where host DJ Rick Dominguez will lead you through all of the most popular line dances that are sure to get your boots tapping.

On Saturday headliner Brandon Stansell a bold new voice to country will take the stage.  He is a singer songwriter with something to say and a voice to remember. “Country music may not be known for being inclusive to LGBTQ+ artist, but rising musician Brandon Stansell is redefining the genre one soulful song at a time”, says Billboard Magazine.

The Dance stage will feature an eclectic blend of rhythmic beats to keep your feet moving all weekend long.  The headliners for Saturday are Leopold Nunan Soares and ANI.  Leopold arrived in Los Angeles at the age of 23 and quickly became an integral part of the LA nightlife and entertainment scene.  He brings a soulful Brazilian flavor to house music.  ANI is a new and upcoming artist whose debut single Dance the Night Away reached its peak at #33 on American Billboard.  She has recently released her new single Confessions that is growing in popularity in the clubs. We will also introduce to Long Beach the Alien Dance Band a 3-piece percussion group that was inspired by the Blue Man Group.  The Alien Dance Band will light up the stage as they bring their unique blend of Electronic Dance Music.

Sunday on the Dance Stage it’s all about that beat as an array of DJ’s hit the stage with headliners DJ Lez Lee and DJ Angie Vee.

Visit www.longbeachpride.com for information on all entertainers and dj’s as well as performance day and times.