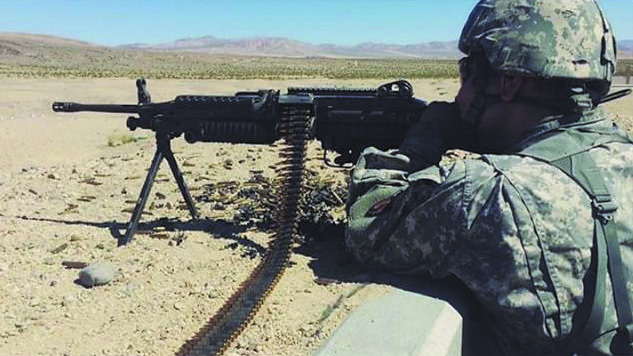 Rudy Akbarian is a transgender veteran of the United States Army.

Akbarian, a descendent of Armenian ancestry, is not only filled with patriotism for serving in his country’s military but he is also willing to die for his country and defend its national ethos. Its ethos are, essentially, an amalgamation of ideals which include democracy, liberty and equality.

He is often asked, in light of Donald Trump’s presidency and, most recently, the Supreme Court-approved ban on transgender individuals serving in the military, how he can remain devoted to serving a country which, oftentimes, seems to disown people like him.

Akbarian’s family lineage is one deeply affected by political oppression and violence overseas. For example, his great grandmother survived the Armenian genocide — she witnessed her mother’s beheading at the tender age of seven years old. Furthermore, Akbarian’s parents came to the United States as refugees from Iran — seeking asylum from violent political turmoil.

“America saved my family’s life because they took them in,” Akbarian. “I’m the first born, the first natural born American. I have a lot of patriotism, a lot of love for this country — for how it opened its doors to my family and protected my family. I felt that I needed to do the same by protecting this country.”

Akbarian served in the military for six years — before he retired, he served as a specialist in E-4.  In essence, he was one rank short of becoming a full-fledged sergeant.

He began medically transitioning – while in the military – at the age of 23. He started the process as soon as he returned from boot camp and advanced individual training — he was merely a private in the military then.

Back in July 2017, President Trump tweeted that one of his reasons for banning transgender people from the military was due to the “tremendous medical costs and disruption that transgender in the military would entail.” Akbarian claims he never asked for any financial assistance from the military during his transitioning process. Furthermore, his intent was far from disrupting the unit he worked in — Akbarian wanted to keep his transition as discreet as possible.

At the time, the military was not “okay” with transitioning, according to Akbarian. He figured that he could begin transitioning and hide the fact until the facial changes become too evident to remain a secret. However, within his first year of hormone replacement therapy, his body hair became adamant. He knew then that he needed to begin having conversations with his fellow soldiers about why he suddenly had a five o’clock shadow at eight in the morning.

He was wary of backlash from his higher-ups in the military — for instance, he assumed he would eventually have to resign from the military as a result of being transgender. However, Akbarian was greeted with tolerance, respect and a sincere desire, from his colleagues, to better understand his situation.

“They [commanding officers] were 100 percent supportive and, most of the time, they were like, ‘We don’t even see gender; We just see soldiers,” Akbarian said. “You got a mission, go do the sh-t, get it done and that’s it. We had a bunch of cis-girls and cis-boys in the unit. Everybody kind of mingled within each other. We saw each other as family.”

His unit was a progressive one — so much that one day a U.S. Army major came out to his unit’s location to provide soldiers with “transgender training.” This program would provide cisgender soldiers with essential information to better understand their transgender counterparts in the military.

“It was incredible,” Akbarian said. “I stepped up [during the training] and answered a bunch of questions that people had that they were too scared to ask. It was a really enlightening, eye-opening experience for both me and the people who were in my unit.

“Everytime I went on base, everytime I put on the uniform — I was happy to do so. In fact, I miss it so much. I think about it everyday.”

When Akbarian heard the news regarding the Supreme Court granting the Trump Administration’s request to bar transgender individuals from serving in the military, he said that he felt pained.

“I thought it was a joke,” Akbarian said. “Then when I saw my trans military facebook friends talking about it and them freaking out, I was heartbroken. How? How can this happen in America? And how can somebody who has never served a day in life in his life — who avoided the draft God knows how many times — try to tell us that we can’t serve when we just want to protect the country?”

Akbarian said he never felt discriminated against while in the military. In fact, he felt at home. Although there were awkward moments — for example, there was one occasion when Akbarian was unsure which gendered showers were appropriate for him. The soldier felt welcome among his peers.

“I’m happy that I’m no longer enlisted — that I’m a veteran now, technically,” Akbarian said. “I wish I could have re-enlisted but I’m glad that I didn’t because [the news] didn’t hurt as much. I’m not thinking about what I’m going to do next or where I’m going to go. But it still hurt, because there are people I know who are doing 20 years, who are doing multiple years, who are in such high ranks, who are trans, in the military and serving so honorably and courageously that are about to lose their career.”

Following his departure from the military, Akbarian worked as an employment specialist for the Los Angeles LGBTQ+ Center. At The Center, he assisted homeless LGBTQ+ youth in finding employment opportunities. He is currently attending barber school.

He still feels a significant amount of pride and patriotism as a veteran of the U.S. army. He said that he hopes the upcoming presidential election will bring about a progressive leader — one that both Democrats and Democratic Socialists could get behind to support.

“If Donald Trump wins 2020, he’s already destroyed America. He’s exposed the most horrid, racist, sexist, homophobic, xenophobic people that live and exist in America,” Akbarian said. “I don’t really know how much worse it can get. I’m really scared for America.”