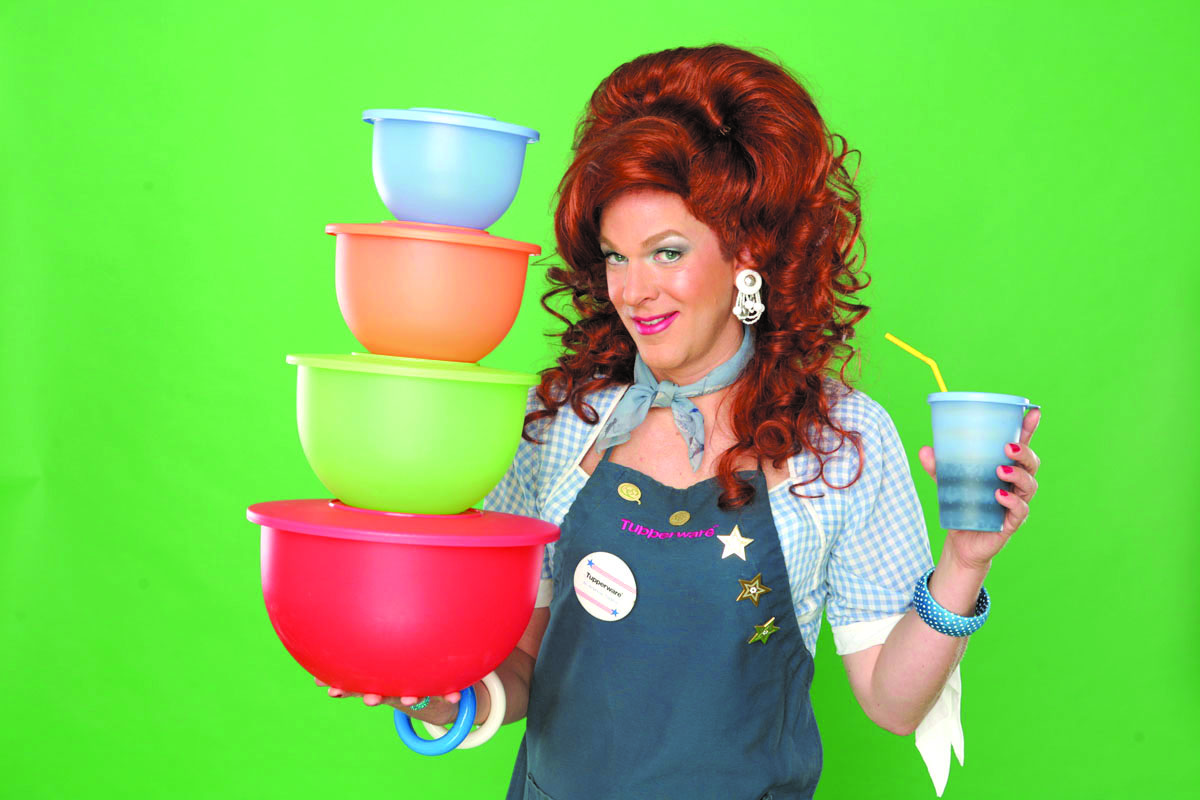 Most people of a certain age might remember that iconic quote from “All About Eve” “Fasten your seatbelts.  It’s going to be a bumpy night.”  Well, as it applies to the award-winning, x-rated “Dixie’s Tupperware Party,” on stage at the Kirk Douglas Theatre, it could be revised to: “Fasten your seatbelts.  It’s going to be an evening of non-stop laughter.” The hijinks or boisterous carryings-on include hilarious stories, free giveaways, and audience participation.  A delightful one-hander written by Kris Andersson, produced by Down South LLC, and meticulously directed by Patrick Richwood, an evening with Dixie will undoubtedly alter your opinion of Tupperware forever.

On entering the lobby, audience members were given name tags, and shortly after taking their seats, and before the invisible curtain went up, they were welcomed by the imposing Dixie Longate, costumed in a red checked dress and a large bouffant red wig.   She worked the audience by passing out candy, chatting, flirting, posing for photos, giving hugs, and smiling the whole time as she walked up and down the stairs on audience left and right.  Whatever was on your mind and perhaps weighing you down disappeared and you knew that a funny, entertaining evening awaited you.  Before beginning the actual play, she gave the usual spiel about turning off cell phones and “In case the building bursts into flames,” she shouted “Get out!”

The scripted and unscripted storyline revolves around Dixie, a statuesque southern belle who apparently left her children in a trailer park in Mobile, Alabama and travelled across the country selling Tupperware.  The action takes place on a simple set (not credited) brightly lit by Richard Winkler with complimentary sound design by Christopher K. Bond.  There is a Christmas tree and a table piled high with an assortment of colorful Tupperware products, which Dixie refers to as “crap. ”  Four ladies were chosen to occupy the two couches on either side of the stage, one of whom was designated a Lesbian and became fodder for Dixie’s hilarious, profane one-liners throughout the evening.  The young lady was a great sport and although she blushed every now and then, laughed as heartily as the audience.

Drinking is definitely part of Dixie’s character, who quite casually alluded to having served time in prison, and was annoyed that she eventually had to take her kids back.  She drinks scotch from a sippie cup which one of the ladies on a couch poured for her.  “When the straw comes out, it seals up like a vagina.”  Switching to wine later in evening, she held up two bottles of wine and said, “Something for the car.”  There’s even a sing-a-long with the lyrics flashed on the upstage screen, “I’ve Got That Tupperware Feeling Inside.”

Actors refer to their bodies as their physical instruments, which includes being able to use the voice in a variety of ways.  Dixie possesses an extensive vocal range, which runs the gamut from snorting, mumbling, swallowing lines, lowering her pitch to a whisper, and tossing out improvised barbs in rapid succession.  Now remember, this is a Tupperware party so in between the banter, when she finally gets around to actually trying to sell one of her pieces of “crap,” she modulated her voice, machine-gunning the description of a particular item much like the old-fashion television pitchmen, except on speed. Laughter was continuous as Dixie spat out her one-liners like a non-stop out-of-control bullet train.  She held up one of the pieces listed in the catalog sheet inserted in everyone’s program. The number 469 was flashed on the screen to which Dixie commented, “I love that number.”  She “struggled” with the pronunciation of Chanukah, finally referring to it as Chaka Khan and riffed on the baking soda in everyone’s frig which, “Should have been changed when Nixon was president.” She also offered one of her double-entendre descriptions of mushrooms, “Brown and slimy and when I have that in my mouth, it doesn’t taste good.”

You might be wondering why audience members received a name tag, well each one was numbered and if your number was picked, you would win one of the Tupperware products on display.  But, before you received that coveted prize, you had to run through a gauntlet of questions.  One young lady who had a winning number was greeted on stage by Dixie who asked “How long have you been married?”  “30 years.” “So, all the magic is gone!”  Dixie then launched into an x-rated demonstration of how to get excitement back into her marriage, stroking a tiny ball attached to a key chain as it applies to a specific part of the male anatomy.  Due to the loud laughter in the audience, you could barely hear the dialogue, but understood the visually graphic display.  The other winner was a young lady who is a kindergarten teacher.  Dixie quips, “Well we know they won’t amount to anything.”  At that point, she does a jet-propelled monologue about the day in the life of a kindergarten teacher, resulting in gales of laughter.

Dixie has performed her uproarious show 1,300 times worldwide and yet it’s as fresh as though it was the first time, which is largely due to the lightening speed in which she engages the audience that changes nightly.  For this particular show, an unsuspecting theatergoer named Brian good-naturedly took the brunt of her insults and sometimes sexual word play.  Coercing him to come on stage, she handed him a complicated can opener and with her standing next to him, he made many failing attempts to open the can.  Trying to give him some hints, Dixie patiently demonstrated how to do it using her arms and legs and when he finally succeeded, this good sport was given a huge round of applause.

On one of the few serious notes, Dixie talked about a single mother from the Midwest named Brownie Wise who, in 1948, stumbled upon the idea of making plastic food storage containers and how she changed the lives of thousands of women who were now able to earn money for their families after their husbands returned from fighting in World War II.  The other more serious moment was when she talked about loving yourself and never giving up, much like pep talks given at tier-marketing rallies.  Dixie herself is the mother of three children and started selling this “plastic crap in 2001” and within one year became one of the top sellers in America saying, “I have never had so much fun drinking for free in my life.”  After spending this unique evening with Dixie, you’ll probably never look at Tupperware in quite the same way.”  By the way, need I have to say to leave the kids at home for this one?

$1.00 for each 30 minutes thereafter. Enter on Duquesne Ave.

The City Council of the City of West Hollywood, at its regular meeting on Tuesday, February 16, 2021, approved an...

APLA Health has launched the PrEPexpress.org (PrEP Express) website to help increase the uptake of PrEP (pre-exposure prophylaxis) and PEP...

The City of West Hollywood has announced its plan to co-host a “Senior Scam Stoppers” panel to educate the community...

Costa Mesa’s Strut bar and club has announced that it will dedicate a mural to the community of frontline workers...

The West Hollywood City Council, in a 4-1 vote,  approved a partial ban on smoking tobacco in apartment and condominium...

In honor of Black History Month The Pride’s featured poem this month is by poet Victor Yates.  Yates is a...

The New Jalisco bar, one of the longest running Latino gay bars in downtown Los Angeles, has turned to GoFundMe...

Children’s Hospital Los Angeles (CHLA)  is giving people the opportunity to put a smile on children’s faces this Valentine’s Day. ...

A unanimous vote by the West Hollywood City Council will allow your fur baby to enjoy the freedom of being...