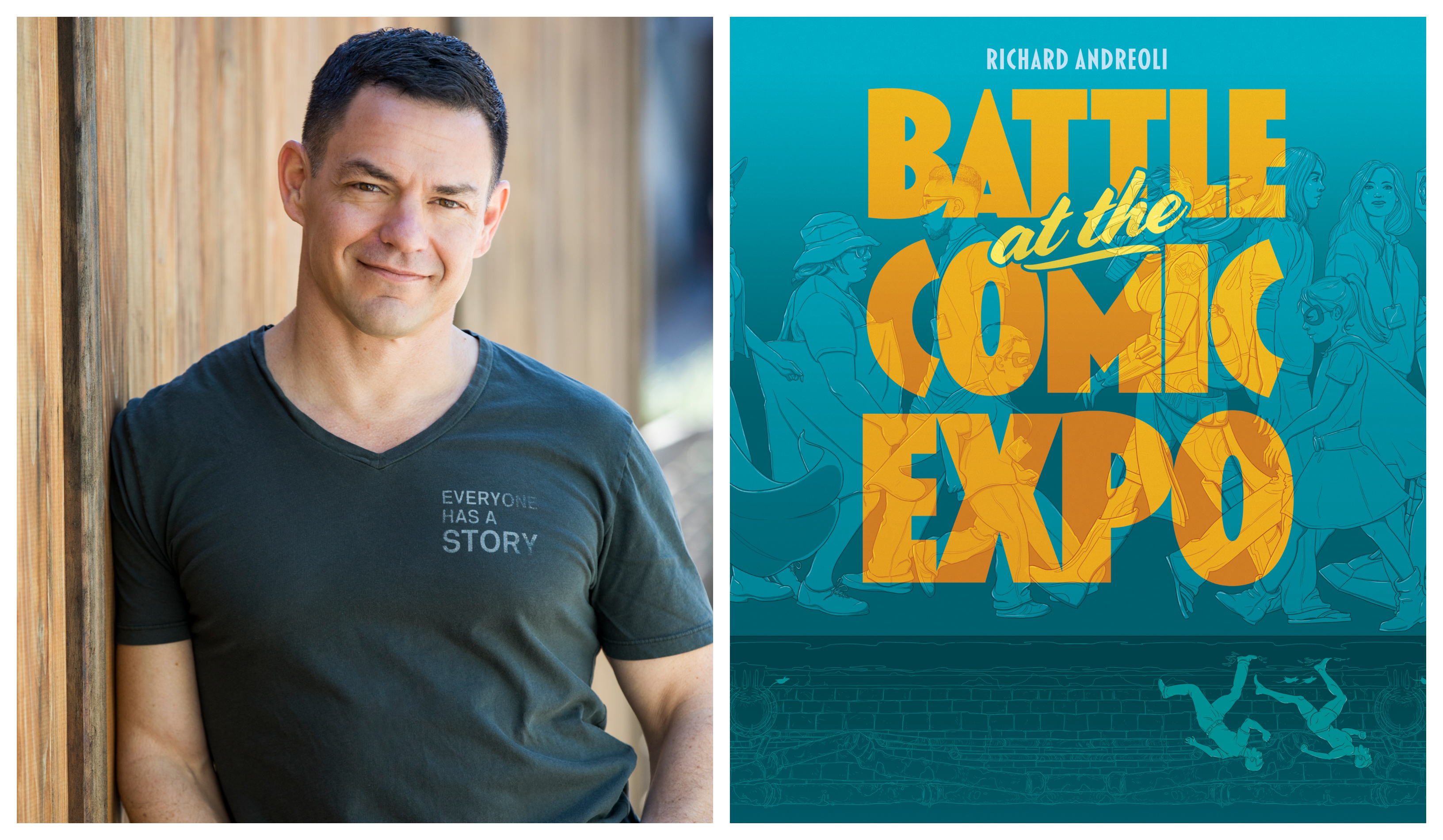 For fans of comics, graphic novels, or any of the million fandoms on the Internet, there’s never any shortage of drama surrounding the latest installment of a well-loved, time-honored fantasy franchise. From the fictional universes of “Harry Potter” and “Sherlock Holmes” to the many iterations and authors of the “Batman” franchise, there’s always a reason to fight to the death in the name of canon, fanon, and #shipping. But what happens when passion crosses the line and all hell breaks lose? Do comic book fans take fate into their own hands to become the superheroes they’ve only read about before? L.A.-based author Richard Andreoli’s “Battle at the Comic Expo” zooms in on what happens when things go disastrously wrong at the largest comic book convention in the U.S. We caught up with Andreoli to talk about his new book and the unexpected gifts of a midlife crisis.

So tell me the origin story of “Battle at the Comic Expo.”

Richard Andreoli: So I started volunteering for ComicCon in San Diego when I was 15. I’m originally from there. I did that for around 20 years. I eventually became a paid employee when they started publishing a magazine. Over the years I volunteered mainly to get in for free. But then I started finding a community there, because when you’re this young kid who’s kind of in the closet in San Diego in the early ‘90s, it was like, if you were gay you were either going to die of AIDS or be killed in a gay bashing. That was kind of the atmosphere down there. So it was kind of a weird world, and suddenly I was thrust into this world of nerds and geeks who were really well educated. So here I am learning about Feminism from these women who were feminist studies majors, learning about alternative religions from the Wiccan in the group. Suddenly I was no longer weird; I was just like every other person. So I found this wonderful community there, and being the comic book nerd that I am, I started thinking– you know like when you’re bored in class– about these disaster scenarios. If robbers broke in right now, what would I do? And this was before 9/11 and the concept of a real national crisis. This was this time where it was like, ‘oh if the bad guys came in, I’d do all this and no one would get hurt!’ That idea stayed with me. I moved on and moved to L.A., became a writer, but I was always playing with that idea of like, what would happen in a world where people who really believed in the central themes of heroism were actually called upon to be heroes. Could you actually rise up to the occasion and do what’s right, or would you discover that you actually have to be kind of dark to do what a hero needs to do.

The novel has gone through a lot of changes since you first started.

I’d first written as a book, and then as a screenplay, and I kept getting the same feedback that the story was too big, there were too many characters. So I revisited it about two years ago and realized there were two characters that really spoke to me. They were at the place in their lives that I was now, that sort of midlife crisis thing of “what the hell am I doing?” And I saw that if I pared the book down to these two central characters, I could show the two sides of myself at the time: The guy who gave up being a writer for a paycheck, and the guy who was a very successful writer but now had a nasty drug addiction, which was sort of where my life could have gone if I’d fallen in with these certain Hollywood types I worked with at the time. So you know, very functional cocaine users. It was fascinating to me because, you know, writing is therapy. I got to put these two sides of myself in a room and you see them learning from one another and see the different roads each of them could have taken.

So the midlife crisis really informed the book in a way.

I was in a moment a while ago where I was with my husband and I was saying, “why is nothing happening for me, I spend all this time promoting other people!” One of the things I accidentally became good at in my career is Facebook Marketing, so I found myself pumping out all these press releases and things for other people’s brands. And I was like, “why is no one doing this for me?” And then it kind of hit me like, “why don’t you just do it for yourself?” So once I started developing a marketing plan I was like, “oh, this could actually be something.” And now it is. It’s a real thing.

The book is a novel, but it’s very tied into graphic novel culture and fandom.

Fandom is interesting. It’s such a weird thing, because readers of comics and graphic novels know it’s fake, but they’ll quote from a book religiously as if it’s part of the real world, so it’s part of a weird mental dance that fans do. And I do it too! At our wedding, the JP literally said “So say we all” from “Battlestar Galactica.”

That’s what seems to go into good fan fiction, too.

Yeah, and one of the characters in the book, Joe, everyone thinks he’s such a big deal because he write successful fan fiction and he’s like, “I wasn’t writing for ‘Buffy!’ It’s fan fiction!” But it’s funny, because fans on the forums and everything are so intense. There was this thing at ComicCon this year. Batman is marrying Cat Woman and he got death threats on Twitter! It’s so confusing. All the trolls attack anything they don’t like. One of the guys from “Walking Dead”  got death threats for what his character did.

People get so intense and feel this sense of ownership over the character. It feels like a betrayal when something changes.

Right. This is actually what happens to my antagonist, Velma. She was in love with a comic book, and the author made a switch and she couldn’t handle it. I think that people take ownership of the characters because there was something that those characters did that impacted them when they were at a critical age or moment. So when somebody changes that, it can wreck your world.

Learn more about Richard Andreoli here. Keep an eye out for a live reading of the book at Silver Lake’s The Secret Headquarters in August.