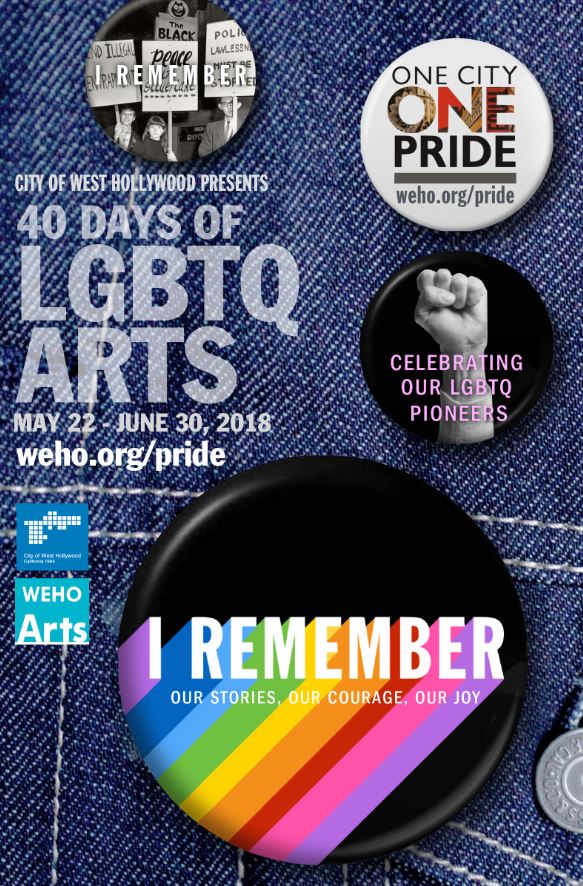 A special full day of screenings and panels with previews of documentaries about the history of the West Hollywood Aquatics Team, AIDS activist Connie Norman, and the creators of the rainbow flag.

The “One City, One Pride” kickoff features a free staged reading of “Dear Harvey” from Celebration Theatre. The One City One Pride Day of History on Saturday, June 2, 2018, is a full day of activities — including sneak peeks at new documentaries about the West Hollywood Aquatics Team and transgender AIDS activist Connie Norman, as well as an opportunity to meet and hear from some of the original rainbow flag makers. The event runs from 1:30 p.m. to 9:30 p.m. at the City’s Council Chambers/Public Meeting Room, located at 625 N. San Vicente Boulevard. For more information and to RSVP, visit https://pride.weho.org/one-city-one-pride-2018/2018/6/2/one-city-one-pride-day-of-history

Composer Craig Hella Johnson and choir members from Conspirare will share the story behind creating the Grammy-nominated masterwork Considering Matthew Shepard in an intimate evening of song and conversation at the City’s Council Chambers/Public Meeting Room, located at 625 N. San Vicente Boulevard. Like many people, Craig Hella Johnson was deeply affected by the death of a young gay Wyoming man in 1998, Matthew Shepard, whose death 20 years ago created a worldwide outpouring of grief and sense of injustice. Admission is free, but RSVP is requested at https://www.eventbrite.com/e/one-city-one-pride-our-journey-with-matthew-shepard-tickets-45605383931.

Heroic Lives, a musical based on LGBTQ seniors’ lives created through a workshop process, will be performed on Friday, June 22, 2018 and Saturday, June 23, 2018 from 7 p.m. to 9 p.m. at the City’s Council Chambers/Public Meeting Room, located at 625 N. San Vicente Boulevard. Heroic Lives is about the people who changed our world, told by the people who were there. Presented with the Los Angeles LGBT Center’s Senior Services Department through a grant from the City of West Hollywood’s Arts Division, LGBTQ seniors participated in a series of workshops culminating in an evening of songs, stories, and original writing about the individuals who fought for LGBTQ liberation and whose lives were acts of heroism. Admission is free, but RSVP is requested by phone at

The world’s first LGBTQ mariachi group will perform a free outdoor concert as part of the City’s Summer Sounds series on Sunday, June, 24, 2018 from 5 p.m. to 6:30 p.m. outdoors at Plummer Park, located at 7377 Santa Monica Boulevard. Led by director Carlos Samaniego, Mariachi Arcoiris de Los Angeles also features Natalia Melendez, the first transgender female performer in the history of mariachi. This unique ensemble was created as a haven for mariachi musicians who identify as LGBTQ to perform traditional Mexican regional music in the otherwise “machista” and somewhat discriminating subculture of the mariachi world. Admission is free, but seating is first-come, first-served. RSVP is requested at https://www.eventbrite.com/e/summer-sounds-mariachi-arcoiris-de-los-angeles-tickets-43721273506.

The TransLife LA PoP Up Film Festival is a one-day event on Saturday, June 30, 2018 from 2 p.m. to 7 p.m. at the City’s Council Chambers/Public Meeting Room, located at 625 N. San Vicente Boulevard. The event will highlight films created by and starring transgender and gender non-conforming filmmakers, artists, actors, and themes. The film festival will kick off with an opening reception, followed by filmmaking/acting workshops, and will conclude with screenings. Admission is free, but RSVP is required at www.popupfilmfestival.org.

“One City, One Pride” is organized by the City of West Hollywood’s Arts Division. For complete up-to-date listings, visit www.weho.org/pride or follow @WeHoArts.

By Henry Giardina May 31, 2018
Tags: Christopher Street West, One City One Pride in NIGHTLIFE
Related Posts