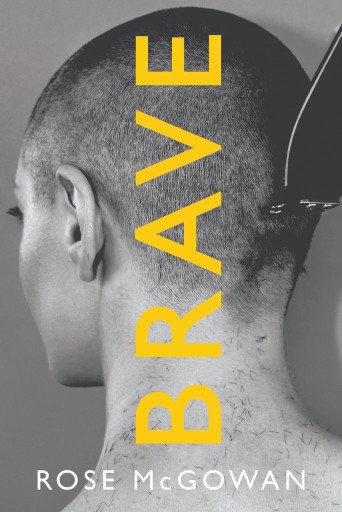 No longer protective of the puppeteers that have literally and figuratively directed her from the time she was born – from the Italian cult she grew up in to auteur and former boyfriend Robert Rodriguez – Rose McGowan is at last unleashing all the rage, sadness and oppression that’s been building up within her for her entire life into “Brave”, a 272-page memoir designed to give her readers hope and empowerment for shattering the too long-held authority of the patriarchy, in the movie industry and every other facet of America. As someone who drank from the Hollywood Kool-Aid for such a significant amount of time, McGowan felt she had no other choice but to sip on it or vomit. And now, she has no qualms about being more candid than ever in this searing account of her journey from, as she puts it, “one cult to another.”

Though many know McGowan for her roles in “Scream” as Tatum Riley, “Jawbreaker” as Courtney Shayne and, of course, “Charmed” as Paige Matthews, the public has been getting to know a very different side of her non-consensual “pinup bad girl” persona in the wake of the #MeToo movement. Considering that her childhood and adolescence were punctuated by examples that didn’t exactly help to promote feminism (e.g. helping to lure new followers into the Children of God cult her parents were apart of with various flirtatious entrapments,) it’s understandable that it took McGowan a very long time to pummel through the walls of the prison she felt compelled to endure.

With a father that proved to be the first male figure in her life that would turn out to be psychologically abusive, McGowan was also a lamb led to the slaughter as a result of her mother’s constant need to attach to malignant men. It was thus that she became a runaway by the age of thirteen, eventually finding herself in Los Angeles at fifteen, where the first of many predatory males with money would aid in offering to brighten her star.  This pattern of becoming the girlfriend of someone in power would persist for the majority of her career, one of the peak examples being her relationship with Robert Rodriguez, who she says she got close enough with to feel comfortable confessing the tale of her rape in 1997 by Harvey Weinstein, a frequent collaborator on projects with Rodriguez and Quentin Tarantino. It was when Rodriguez wrote her story off and ultimately used it for manipulative purposes that McGowan’s eyes really started to open. But by then, she had already starred in the Grindhouse double feature “Planet Terror” and “Death Proof.” And as Vanity Fair put it, “In what McGowan interpreted as the ultimate act of cruelty, Rodriguez ‘sold our film to my monster.’” That is: Harvey Weinstein.

Again and again, McGowan was made to feel crazy, hysterical – just an “actress.” She was sexualized, typecast to play the “villain” and/or the vampy sex kitten, McGowan’s magazine rap sheet reads like a series from one of those scandalous pulp novels of yore. Covers declaring “Death by Sexy!” (Maxim, April 2007) “We had a threesome with Rose McGowan. And it was good,” (JANE, December 2001), “Wild Rose: Hollywood’s #1 Bad Girl” (Maxim, March 1999), “Very Bad Girls, Welcome to ‘Grindhouse’: The Most Violent Chick Flick Ever” (Rolling Stone, April 2007) all serve to accent McGowan’s cut-to-the-quick point: “My life, as you will read, has taken me from one cult to another. “BRAVE” is the story of how I fought my way out of these cults and reclaimed my life. I want to help you do the same.”

The book is set to be released on January 30 by HarperCollins – in spite of Weinstein’s best attempts to thwart the project.