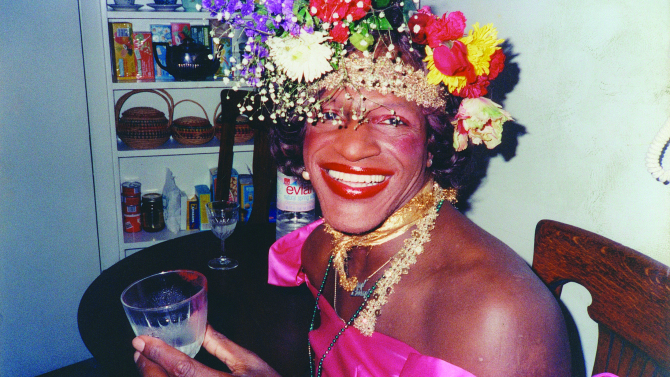 For all of the art that’s been made about transgender activist Marsha P. Johnson, it’s astounding how little we actually know about her. As one of the original queens who fought at the Stonewall Riots, Johnson has solid place in history and, as a historical figure, has been interpreted by many artists and writers in the nearly 30 years since her mysterious death by drowning. Recent years have seen these interpretations almost double. We had 2016’s “Happy Birthday Marsha,” a short film about the few hours before Johnson’s death on July 6, 1992.

That same year, we got a “Drunk History” episode honoring Marsha’s involvement in the Stonewall Riots and the creation of STAR (Street Transvestite Action Revolutionaries) with transgender activist and icon Sylvia Rivera. Around the same time, “Transparent” director Rhys Ernst made an episode just about Johnson and STAR for his “We’ve Been Around” docu-series about trans lives that have been swept under the rug of history. And now, we have David France’s full-length, Netflix-funded documentary, “The Death and Life of Marsha P. Johnson,” a film that seeks to do a more thorough, independent investigation of Johnson’s death than the original detectives on the job. Was Johnson killed by the mob in retaliation for her friend’s efforts to take away their control of the Gay Pride Parade in the early 90s? Was she killed by a John? Was her death, as the coroner proclaimed, truly a suicide? By putting trans activist and New York Anti-Violence Project employee Victoria Cruz on the task, France hoped to find out.

A noble effort, to be sure, but there’s a problem. In fact, there are a few problems. The first is a controversy that came to light a few weeks ago, when Black trans activist Reina Gossett, whose research, interviews, and extensive scholarship surrounding Johnson’s life and work formed the basis of “Happy Birthday Marsha,” claimed that France had taken said research without permission to produce his film in collaboration with Netflix.

The second problem is the placement of “Death” before “Life” in the film’s title, something which famed trans performer Anohni was quick to point out, saying:

“…I find even the title of the new film about Marsha P. Johnson offensive in that it places her death in front of the glory that was Marsha’s courageous life. The film excludes critical facts about Marsha’s status as someone living with AIDS, presumably because it doesn’t support the filmmaker’s theatrical narrative. This is the way that underground stories are manipulated to enter the marketplace and become myths.”

But the third and least-discussed issue that viewers may find with the film itself is a critical lack of information that draws us, continually, away from the film’s actual subject: Marsha herself. Not her death, not her celebrity. Her life. France’s documentary is a well-made film, and it does well by placing Cruz at the center, telling its story through Cruz’s own search for justice and truth. Yet when it comes to Marsha, we’re barely given enough information to know which pronoun to use. The film’s interviewees go back and forth between ‘he’ and ‘she’ pronouns, and if there’s a moment where Marsha ever describes herself as, in the parlance of the time, a “transsexual,” we’re not made privy to it. This is curious, especially during the moment when the film tries to tie Marsha’s possible murder to the 2016 murder of Islan Nettles, a trans woman who was beaten to death, and whose murderer received a sentence of twelve years in prison. Nettles was born in 1992, the year Johnson died.

None of this is to say that France’s activism is not good, interesting, or worthy of being seen. It is.

But when it comes to a figure like Johnson who has come, in the past few years alone, to represent so much for the queer community and speak to its oft-forgotten history, the story will never feel fully told.