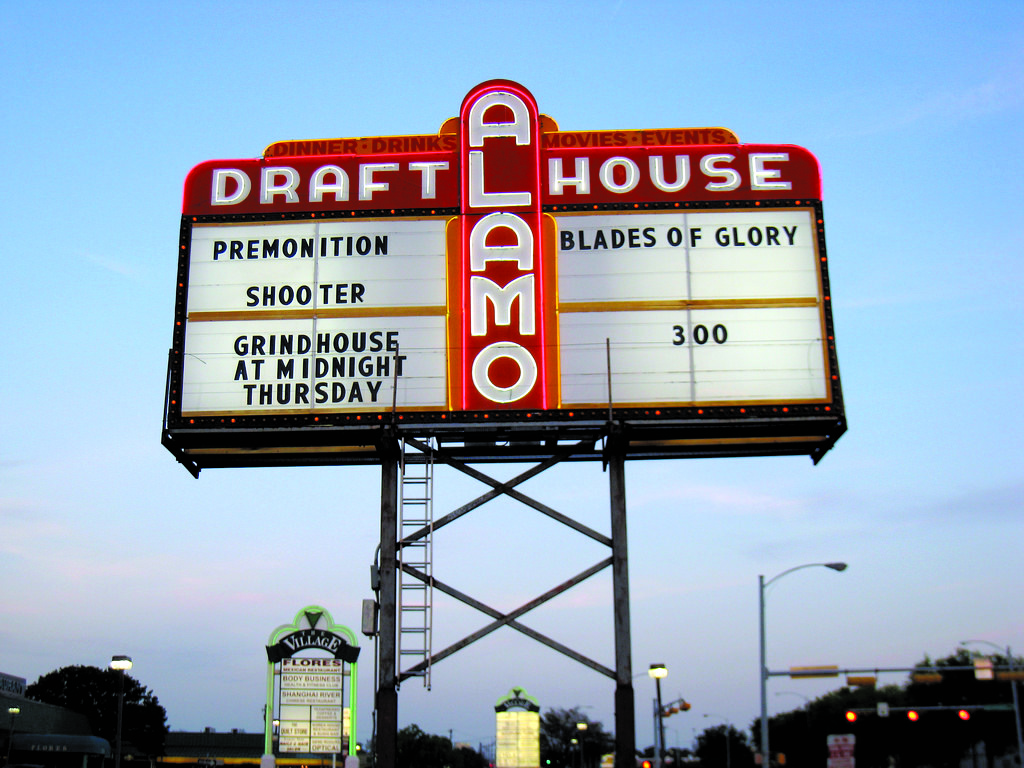 BY GENNA RIVIECCIO| One would think that, as the cinema world capital, at least for porn, L.A. would have jumped on the Alamo Drafthouse bandwagon long ago. But it’s taken Tinseltown three years to catch up to Austin and, well, even Brooklyn (that’s what Angelenos get for the lifelong scar of stealing the Brooklyn Dodgers) in terms of being greenlit for a lease. While its arrival in Downtown’s The Bloc should be an exciting development for cinephiles, Alamo Drafthouse comes at a time of oversaturation in terms of what L.A.’s revivalist scene has to offer. At this point, there’s nothing all that special or marvel-inducing about a movie theater where you can drink and eat. Sure, the Alamo has its overpriced alcoholic milkshakes to set them apart and their women-only screenings that will hopefully continue beyond “Wonder Woman.”

Between go-to staples like the Arclight, the Landmark, and even more classic movie houses like Laemmle’s Royal Theatre, Alamo Drafthouse merely feels like overkill, the sort of movie-theater-on-steroids that Downtown L.A. needs simply to continue growing into a caricature of itself.

While the CEO of the Alamo enterprise Tim League commented of the expansion, “Building a new audience for foreign language films, documentaries, and independent movies is core to the Alamo brand, and this flagship theater will be ground zero for that effort,” L.A. isn’t exactly prime territory for such a “new audience.” This is the town that has managed to keep a silent movie theater afloat and attract hordes to a cemetery every summer to delight in the ghosts of the silver screen. L.A. is well-versed–almost grossly so, at times – in the nostalgic “core of the Alamo brand.”

Granted, the next generation of Angelenos is presumably nothing like Mia Farrow’s classic-film-obsessed Cecilia in “The Purple Rose of Cairo,” so maybe they do need a helping hand in learning how to appreciate the “esoteric” cinema of their forebears. Or they’ll just get a Filmstruck membership and get drunk at home while watching key pieces from the Criterion Collection. Either way, the Alamo Drafthouse, though tailor-made for the City of Angels, feels a lot like too little too late at this juncture.