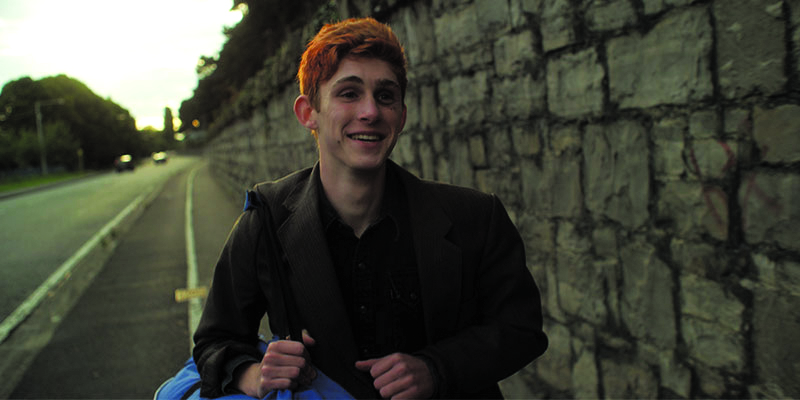 When Irish director John Butler set out to make a story about growing up queer, emo, and rugby-obsessed in south Dublin in the 1980s, he didn’t exactly have a template to follow. Except, of course, his own story.  The result, “Handsome Devil,” turned out pretty spectacular, blowing audiences away at TIFF with the heartbreaking story of Ned, a gay, Smiths-obsessed who develops an intense friendship with his boarding school roommate.

The Pride sat down with Butler to talk about music, growing up, and what he wants LGBTQ audiences to take away from the film.

Did you set out to make a different kind of coming of age film with “Handsome Devil?”

I wanted to make a buddy comedy with a happy ending in which at least one of the characters isn’t straight. Too often, our stories aren’t told in the area of comedy. It’s time! Also, although I loved American high school comedies such as the films of John Hughes, the homophobia in them is a little hard to endure in 2017, so it is fun to update that sub-genre.

Tell us a bit about the casting process for this film.

As is the way in 2017 it involved actors taping on the iPhones, and that’s how I came across Fionn O’Shea, who was on his first feature in South Africa, and Nick Galitzine, who’s Irish accent was so convincing I thought he was an Irish actor living in London and not a London boy as Nick is. It was a joy – casting is 99 percent of the director’s job.

What were some of the things that made it easier for you growing up?

I went to a fee-paying, rugby playing all-boys school and found it… tricky. I was gay, and I loved sport and found it hard to reconcile what I thought were two incompatible aspects of myself. They’re not, of course, but it felt that way. My family was loving and supportive, though, and I had – and have – good friends. Also, it must be said that when you are young, very often things like music and sport mean more to you than they can to any adult. That was certainly the case for me. Escape!

Do you think the world has changed significantly for queer kids since then?

There’s still no “out” premiership soccer player of rugby union player in 2017. Incredible, and sad. So it’s gotten better, but it’s easy to forget that we don’t all live in liberal bubbles like WeHo, or South Beach, or Dublin, Ireland which was the first country in the world to pass marriage equality by popular vote. It’s still incredibly rough for LGBT kids the world over. And if you buy into the idea that human sexuality is an identity, then that begins at a much younger age that one’s sexual awakening. So yes, it gets better, but it should be getting better much, much earlier – when kids are young and in school. That’s the responsibility of adults.

What’s the song that got you through the hardest point of adolescence?

Everything by David Bowie, and everything by The Smiths – which makes some of Morrissey’s recent statements about race very difficult to swallow.

What do you want young kids to take away from Handsome Devil?

Hold the line, be true to yourself. And never speak in a borrowed voice.

HANDSOME DEVIL opens in Los Angeles on June 2, 2017. The film will also be available On Demand.