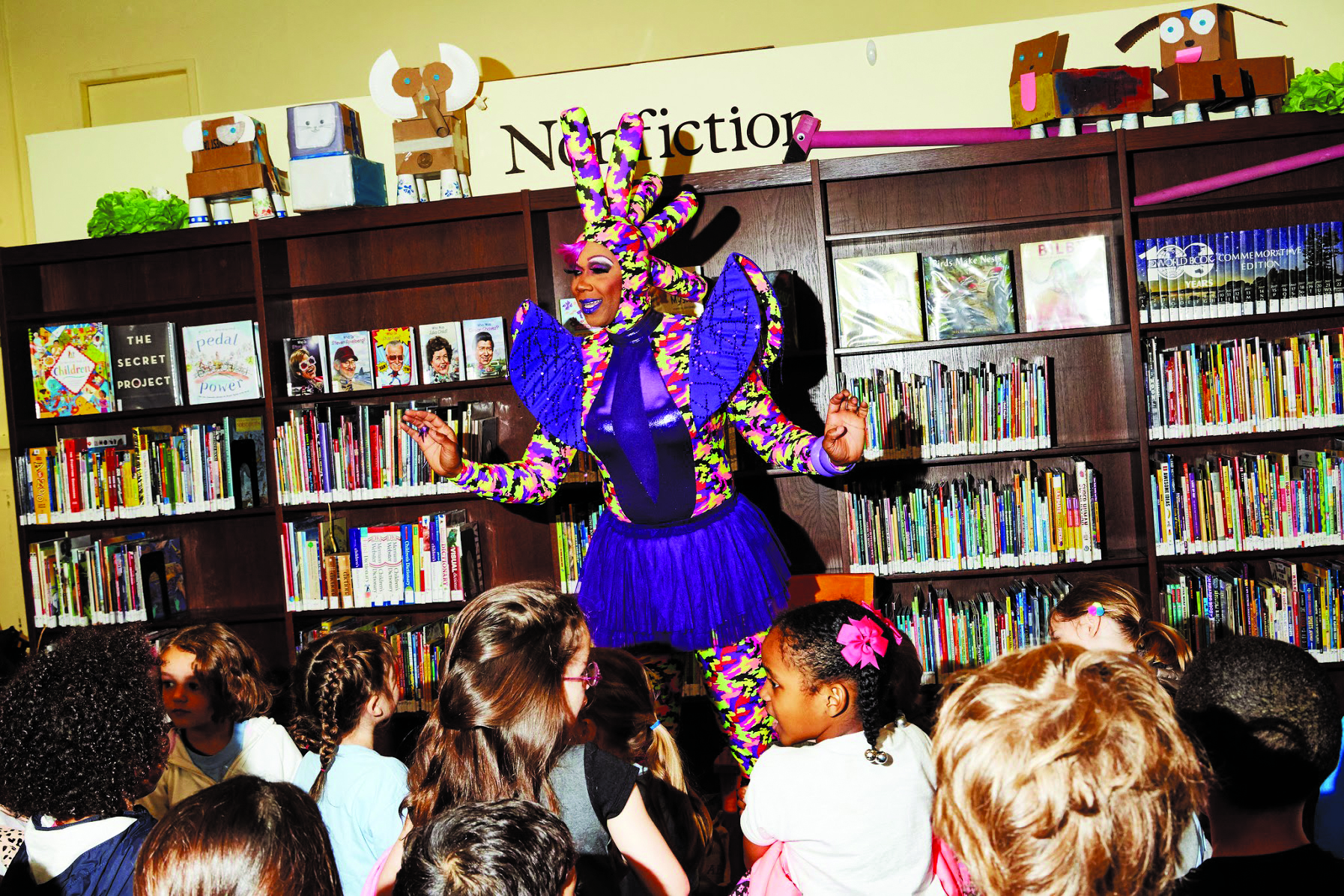 BY CONNOR  DUFFEY| Drag queens have long served as a brilliant, bombastic presence in gay nightlife and the culture at large. With their glamorous, cartoonish appearances and larger-than-life personas, these gutsy entertainers have positioned themselves as joyous mascots for gay culture, albeit primarily limiting their presence to more adult enjoyment in clubs and bars.

Given their candy-coated exterior, why then has the shimmering grandeur of drag queens been limited to more mature audiences? Wouldn’t their seismic, effervescent presence end up a hit with a younger demographic as well?

Writer Michelle Tea, alongside RADAR Productions in San Francisco, has put a stop to this with Drag Queen Story Hour, a read-aloud program for children that embraces edification, kindness and a more inclusive environment for the younger generation.

Drag Queen Story Hour is a fairly self-explanatory program: drag queens visit city libraries to read children’s stories to an audience of excitable kids and ponderous parents, leaving their more risqué performance flairs at home. The queens read from a pre-approved list of books from the library, sometimes delving into issues such as gender fluidity or general LGBT acceptance. Such was the case when the drag queen Harmonica Sunbeam read “Morris Micklewhite and the Tangerine Dress” by Christine Baldacchino to a group of children six and under at the New York Public Library in Greenwich Village. The story concerns a boy who enthusiastically wears a dress to school each day, despite any potential backlash from his peers.

In a report from The New Yorker,  Tea divulged that one of her main inspirations for the program was her belief that drag queens make ideal performers for children:

“‘I have long thought that drag queens need to be the performers at children’s parties, rather than magicians or clowns,’ she said. ‘Drag has become more mainstream. Kids might have seen one on a billboard or on TV.’”

Barbara “Bix” Warden, a librarian at the San Francisco Public Library, where the program has been hosted since 2015, told NBC News that she believed the Story Hour elicited delight from its young attendees:

“‘The children react very positively…They love the drag queens and want to have their picture taken with them. They adore the face-painting which we have had accompanying the readings at our programs.’”

Kyle Casey Chu, who performs in drag as Panda Dulce and took part in the program at the San Francisco Public Library, also spoke to NBC News about why he believes Drag Queen Story Hour is a positive experience for children and helps in de-stigmatization of the LGBT community:

“’More than just exposing youth to different forms of beauty, performance, and experience, it dispels the stigma and stereotypes of predation and lechery that are so often and unfortunately projected onto LGBTQ youth workers…And it does so in such an innocent, playful, and positive way. It’s a beautiful thing.’”

RADAR Productions’ executive director Juliana Delgado Lopera echoed sentiments to SF Gate that children being a part of queer spaces was a general rarity and could ultimately be wholly positive in execution:

With the advent of a program like Drag Queen Story Hour, children are seeing LGBT individuals in a more normalized and friendly atmosphere, even if they may not yet realize it. Hopefully, as a result, some of these children will be a little less afraid to tell their parents if they too feel similarly to Morris Micklewhite.

Drag Queen Story Hour has locations in Los Angeles, San Francisco, and New York City. Visit dragqueenstoryhour.org to find out how you and your child can attend.