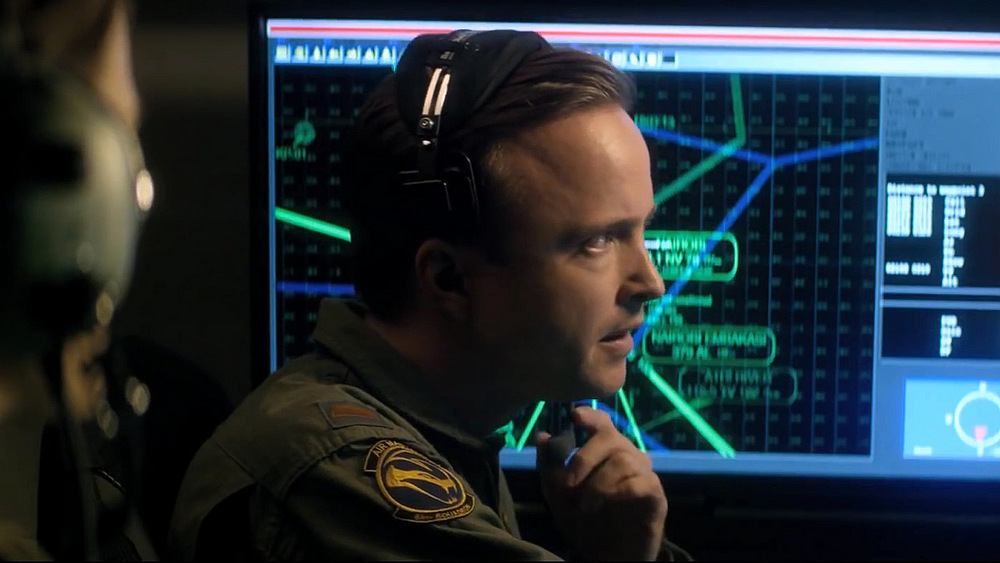 BY JOHN PAUL KING  |  Making a military drama today — at least one with a contemporary setting — can be problematic.  Though combat-oriented films stand a good chance of doing well at the box office, a hawkish viewpoint will put off liberal-minded audiences, while a movie that smacks of pacifism risks alienating those on the opposite end of the political spectrum.

A few recent films have attempted to navigate this volatile divide, but because American studios are inclined to take the safer path, the majority of their movies dealing with war have chosen to focus on action rather than issues.

Fortunately, “Eye in the Sky” is a British film.

Directed by Gavin Hood, from a screenplay by Guy Hibbert, it’s a taut thriller following a mission, jointly executed by British, American, and Kenyan forces, against a group of terrorists in a Nairobi neighborhood under the control of Muslim extremists.

The operation is remotely commanded from Sussex by British colonel Katherine Powell (Helen Mirren), while real-time drone surveillance is provided by an American pilot (Aaron Paul) in Nevada.

Although the initial objective is to capture the targets, an escalation of circumstances forces Powell to order a precision missile strike on the terrorists’ location; but when the drone’s cameras spot a young Kenyan girl within the kill zone, the risk of her becoming a collateral casualty (and the political firestorm that would result) halts the mission.  His requests for authorization to proceed with the strike is passed up the chain of command all the way to the highest-ranking officials in the British and American governments.

The events of “Eye in the Sky” take place in the space of a few hours, which results in tight pacing and underscores the story’s sense of growing urgency; it is not, however, a movie that hinges on action; rather, it is a cerebral one.  Although Hood makes it a very cinematic film, visually speaking, Hibbert’s screenplay operates more like a play.  It introduces a variety of characters, allowing them to present the various viewpoints inherent in its premise, thoughtfully, and with eloquence.  More importantly, it refrains from forcing a moralistic judgment on any of them in the process.

As a result, the movie comes off as a balanced, intelligent, and timely look at the ethics of modern warfare- conducted from safe and comfortable rooms, hundreds of miles away from the action, with the assistance of precision technology and the kind of electronic sophistication that provides the vantage point, sometimes literally, of a fly on the wall at ground zero.

It weighs the good of the many against the good of the few, it examines the necessity and the frustration of thorough debate and discourse in making split-second decisions, it finds the nobility and the cowardice found on both sides of the issues in question, and in the end it poses the basic question that has been at the core of warfare since the dawn of history: does the end justify the means?

It does not attempt to answer that question; it leaves us to ponder it for ourselves, just as the film’s characters- and anyone who has ever been a real-life participant in war, at any level- must do, presumably for the rest of their lives.

In keeping with the script’s theatrical flavor, the cast is made up largely of English actors- headlined by the always superb Mirren- who have cut their teeth on the stage.  They perform as a crack ensemble, keeping the tension wound tight even through the most dialogue-heavy scenes, and succeeding in making strong connections with each other despite the fact that many of the principals never even filmed in the same room at the same time.

Special mention must be made, also, of the late Alan Rickman, as Mirren’s superior, whose mellifluous delivery and richly human presence bestows the film with kind of heavy but heartfelt wisdom; though it was his last live action performance on screen, it may also be one of his best, reminding us of how much he will be missed.

“Eye in the Sky” falls short of being a truly great film.  Though well-written and acted, the play-like structure of the script sometimes results in a didacticism that feels a tad deliberate, and the well-wrought tension is marred just before the climax by a by a too-calculated plot complication that strains credibility and dilutes our emotional involvement just when it should instead be heightened.

These are minor flaws, though.

Overall, Hood’s film is an excellent thriller, suspenseful, provocative and timely, and it is better than any mainstream movie in recent memory in considering the morality of war; it looks beyond black-and-white arguments to a place where politics become irrelevant, and that in itself is a rare enough accomplishment to make it a must-see for any thinking film lover.