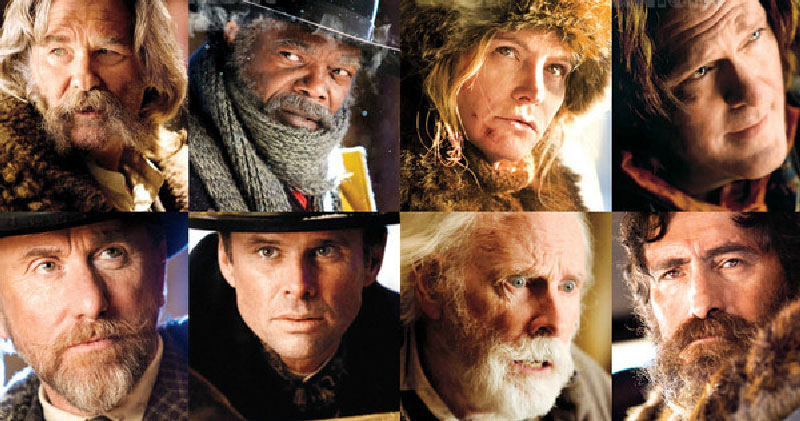 BY STEVE ERICKSON  |  When the Fraternal Union of Police spokesman accused Quentin Tarantino of hypocrisy for making violent films while denouncing real-life police brutality, he didn’t simply show an inability to tell the difference between reality and fiction. He suggested that he wasn’t paying close attention to Tarantino’s recent films.

As with earlier works like “Reservoir Dogs,” Tarantino veered between playing violence for comedy and offering a relatively realistic treatment of what it’s like to be shot in the gut. In “Death Proof,” “Inglourious Basterds” and “Django Unchained,” the director depicted violence as a means for oppressed people – women viewed as prey by a misogynist serial killer, Jews during World War II, African-American slaves – to punch up. If these films glorify violence, they do so under very limited circumstances.

“The Hateful Eight” is being presented in big cities in 70mm, with an intermission dividing its seven “chapters” in two. It’s set a few years after the Civil War, in Wyoming as a blizzard approaches. Bounty hunter John Ruth (Kurt Russell) and his captive Daisy (Jennifer Jason Leigh) are traveling in a stagecoach towards the town of Red Rock. There, John intends to hang her. They are stopped by former Union soldier Marquis Warren (Samuel L. Jackson) and Chris Mannix (Walton Goggins), who claims to be the new sheriff of Red Rock. They find shelter from the storm at a small inn called Minnie’s Habderdashery, but Minnie and her family are nowhere to be seen.

Tarantino’s films, with the exception of the relatively blood-free “Jackie Brown,” have always offered a combination of extreme talk and extreme violence. This combination, as well as the fact that his dialogue is filled with profanity and slurs, seems to make them go down easy with mainstream American audiences, despite the fact that Tarantino cites wordy French New Wave director Eric Rohmer as an influence. His use of the N word reaches new heights in “The Hateful Eight,” although it’s arguably  historically justifiable for these particular characters in the 1860s,  and his characters say “bitch” more often than Dr. Dre as well.

The most sympathetic character in “The Hateful Eight” is a black man who forces a white man to give him head. Tarantino takes racist fantasies, like the violent slave revolt of “Django Unchained,”  and flips them around with empathy for African-Americans. The final “chapter” of “The Hateful Eight” is called “Black Man, White Hell.” It sounds like one of the pulp crime novels of Donald Goines or Iceberg Slim, and I’m sure the resemblance is deliberate. Strangely, Tarantino has yet to create a gay character, but he’s repeatedly depicted male-on-male rape. His much-remarked foot fetish makes its presence felt in “The Hateful Eight” as well.

At first, Daisy  seems like an utterly demeaning role for Leigh to take. She shined in films like Ulu Grosbard’s “Georgia” and David Cronenberg’s “eXistenZ,” but after turning 40, roles dried up for the actress. John uses her as a human punching bag in the opening scenes. Yet the character has a startling resilience and inner strength. If she gets abused by men, she’s capable of scheming to murder them in turn. She survives longer than some of her tormentors. She even gets to sing a song about her travails. It’s no slight to the male cast members to say that Leigh gives the film’s most memorable performance.

Much of the violence in “The Hateful Eight” resembles a splatter film like Sam Raimi’s “The Evil Dead.” By the second half, the floor of the cabin is littered with bodies and blood. Tarantino obviously gets a kick out of showing men vomit huge quantities of blood or blowing someone’s brains out suddenly. Yet he shows the consequences of violence as well. When characters who’ve been shot in the leg try to walk around, the film emphasizes their pain. There are long, unpleasant close-ups of Daisy  covered in splattered brain matter; the initial shooting that sprayed her with this material may be played as a joke, but the aftermath isn’t.

If Tarantino’s work has been growing more political, “The Hateful Eight” is a small step backwards. While an ending revolving around a forged letter from Abraham Lincoln could hardly be called entirely apolitical, the film engages with the Civil War and racism without the urgency of “Django Unchained.” It delivers a view of American history as a bloodbath without redemption or hope, to be true, but it never gets nearly as disturbing as his previous depictions of slavery . It’s missing the sense of horror at gun violence permeating American life now, and best expressed cinematically in Spike Lee’s “Chi-raq.” Still, it’s hardly a thoughtless thrill ride.