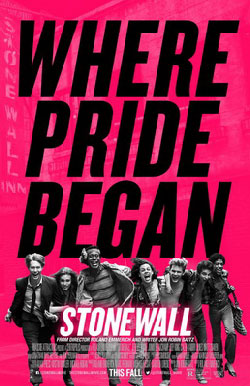 BY DAVID-ELIJAH NAHMOD  |  “Best” of course is a relative term. From my vantage point, these are the best LGBT films of 2015. MIA are several films that I suspect would have made the list had I seen them: the lesbian dramas “Freeheld” and “Grandma”, and the documentary “Matt Shepard is a Friend of Mine”–I look forward to catching all three on DVD.

Of the films I did see, it was “The Danish Girl”, a riveting trans themed biopic from “Les Misrables” director Tom Hooper which tops the list. There are in fact two trans themed films on this list, as the trans community continues to emerge from the shadows and take their place at the table. There’s also one controversial choice.

“The Danish Girl”
Director Tom Hooper and star Eddie Redmayne both deserve to win second Oscars for their work in this mesmerizing biopic. The film tells the true life story of LIli Elbe, believed to be the first transwoman to undergo sex reassignment surgery. “The Danish Girl” is, first and foremost, a love story between Lili and her wife Gerda (Alicia Vikander), who remain together even after Lili transitions. Though Gerda sees herself as losing her beloved husband, she stands by Lili’s side. Even as their relationship becomes platonic, Lili’s and Gerda’s deep love for each other remains fully intact.

Redmayne gives an extraordinary performance both as Lili, and as Einar, the male persona she leaves behind. In other films where transwomen are played by cisgender men, the trans character often looks like a drag queen. Not so in “The Danish Girl”–Redmayne’s  power as an actor allows a woman to emerge on screen. Redmayne completely alters his onscreen body language as he transitions from Einar to Lili.

The story’s setting, 1920s Copenhagen Denmark, is lovingly recreated in his heartbreaking and heartwarming history lesson. Lili’s tale serves as an education to us all, whether trans or not: find the courage and strength to be yourself.

“Larry Kramer: In Love and Anger”
Produced for HBO, Jean Carlomusto’s feature length documentary preserves the history and legacy of legendary AIDS activist Larry Kramer. The film opens as Kramer, a long time HIV survivor, lies in his hospital bed, barely alive after undergoing surgery which was needed in order to safe his life–director Carlomusto is seen in Kramer’s hospital room tending to his needs.

“Larry Kramer: In Love and Anger” then flashes back to Kramer’s less than happy childhood and follows him as he begins a career as a Hollywood producer and screenwriter–Kramer received an Oscar nomination for penning the script to Ken Russell’s “Women in Love” (1969), a film which stunned viewers at the time due to its blatant homoeroticism. In 1977 Kramer became persona-non-grata in the gay community after his shocker of a novel “Faggots” was published. In the book Kramer dared to suggest that gay culture was shallow and unhealthy–its an argument still being waged today.

When Kramer rallied the troops during the peak years of the AIDS epidemic his legacy was secured. A co-founder of the AIDS activist organization ACT-UP, Kramer screamed and cursed at a government which knowingly let people die–and at gay men who were, in his eyes, apathetic.

“Larry Kramer: In Love and Anger” includes a still-shocking clip: Kramer tells a 1980s TV interviewer that the government was ignoring AIDS because the disease was killing “niggers, spics and faggots.”

By the time Carlomusto made her film, most people had admitted that Kramer was right.

“Bessie”
Another HBO production, Queen Latifah stars in this beautifully produced biopic of legendary blues singer Bessie Smith. Smith (1894-1937) was an African American woman who walked to the beat of her own drum at a time when most “colored folks” knew their place.  Smith lived her life to the fullest and partied hard. She loved men and women alike, and the film doesn’t shy away from her bisexuality.

Sumptuously produced, “Bessie” recreates Smith’s era–including the blatantly harsh racism which was the social norm during those days. The film features a number of thrilling musical numbers with Latifah belting them out as she struts her stuff across the stage. “Bessie” is grand entertainment–it’s a fitting tribute to a woman who kicked open a few doors as part of the generation which preceded the civil rights movement.

“Tangerine”
Amazingly, filmmaker Sean Baker shot his film with an i-phone. Thanks to current technology, “Tangerine” has a somewhat polished look, while also capturing the harsh realities of transgender street life. Real life transwomen Mya Taylor and Kitana Kiki Rodriguez star as Alexandra and Sin-Dee, best friends and prostitutes on the streets of Hollywood.

“Tangerine” is a no-holds bared look at a dangerous lifestyle that many transwomen of color are forced into due to the attitudes of a society which still refuses to accept them. This is strong stuff–the film illustrates in no uncertain terms how unsavory and violent Alexandra and Sin-Dee’s world can be. But “Tangerine” is also funny and sweet–the girls are loud and foul mouthed, and they genuinely love each other.

“Tangerine” is an important film that might open viewers’ hearts and minds to how many in the trans community have been forced to live, even as they hope and yearn for something better.

“Boulevard”
“Boulevard” is not a great film–the script needed some work.  But “Boulevard” marks the final performance of the late, great Robin Williams (1951-2014). One of our most beloved stars since the 1970s, Williams was given one last hurrah as Nolan, a sixty year old man in a somewhat friendly but loveless marriage to Joy (Kathy Baker). Nolan and Joy create the illusion of themselves as a happily married couple, even as they hide the truth from their friends and from themselves: they sleep in separate rooms and have not made love in decades.

After Nolan meets Leo (Roberto Aguire), he’s able to face the truth about himself. Leo is a troubled hustler, and Nolan tries to mentor him. Its a lost cause, but their strange friendship enables Nolan to accept his own long suppressed homosexuality.

The flawed script doesn’t allow viewers to learn who Leo and Joy really are, but William’s performance is so powerful that “Boulevard” becomes a rewarding viewing experience. At the time the film was shot the actor was struggling with his own inner demons–Williams allows the audience to peak inside Nolan’s soul and to see the character’s torment–we might just be seeing a bit of Williams’ real life torment as the story unfolds.

It’s an extraordinary performance from a great actor. A most fitting final bow.

“Stonewall”
Roland Emmerich’s “Stonewall” is to the legendary riots what James Cameron’s “Titanic” was to the maritime disaster, a romanticized retelling of actual historic events starring a fictional lead. The film was viciously attacked by LGBT activists before it was even released–the intensity of their venom was disturbing–many of the protesters admitted that they’d not seen the film.

The accusations hurled at the film were false. The film tells the truth about the harsh conditions which gay and trans kids–many of whom had been rejected by their families–were forced to live in during the Stonewall era. Nor does “Stonewall” shy away from the police brutality and harassment which sparked the riots.

The film has two villains: a violent gay mafia goon (Ron Perlman) and a conservative gay activist (Jonathan Rhys Meyers) who shows a willingness to sell his community out. Both of these characters are white. “Stonewall” also offers a riveting, Oscar worthy performance from newcomer Jonny Beauchamp as Ray/Ramona, an embittered yet kind-hearted cross dressing Latin prostitute–Beauchamp steals the film. It’s Ramona and real-life African American Stonewall veteran Marsha P. Johnson (Otoja Abit) who offer fictional lead Danny Winters the love, loyalty and support he never gets from the Rhys-Meyers character.

Ramona and Johnson are “Stonewall’s” most sympathetic and likable characters.

Is “Stonewall” a perfect film? Is it completely accurate? No, but neither was “Titanic”. But “Stonewall” does get many aspects of the Stonewall saga right. It did not deserve the attacks that were hurled at it. It’s out on DVD/Blu Ray–give it a chance.