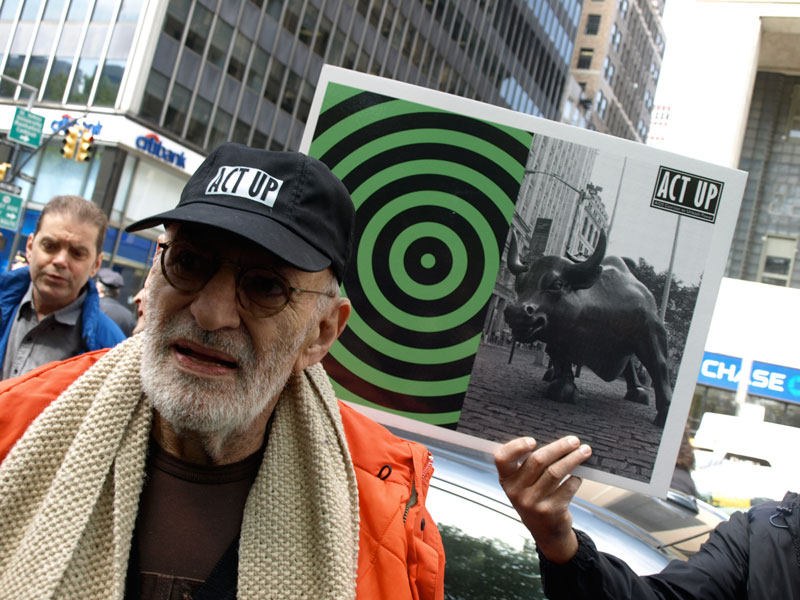 I come before you once again to tell you that the state of research for some kind of cure for AIDS at the National Institutes of Health is in the toilet.

As reported in Poz, a statistical model has predicted that over the coming years, if present trends continue, by 2035 there will be 1.39 million cases of AIDS in America alone, and some 435,000 deaths, costing the healthcare system some $256 billion.

Last year, an estimated two million people were newly infected with the virus worldwide, according to data from UNAIDS. In America, one in eight people infected with HIV do not even know they are infected. One in four new HIV infections occur among youth and young adults ages 13 to 24. Moreover, there was a 22 percent increase in new HIV infections among gay and bisexual men in this age group between 2008 and 2010. In Los Angeles, as reported recently in The Pride L.A., recent years have seen the number of new HIV cases at around 4,500 annually, and nationally that number is around 30,000. “In 1995, a record 50,877 Americans with AIDS died — a one-year count rivaling the 58,000 Americans lost in the entire Vietnam War.” (Frank Rich, New York).

HIV and AIDS patient death rates have dropped significantly among western nations thanks to treatment successes.

But treatment is not always gentle. I have dutifully taken my AIDS meds since they became available and still have respectable T cells and undetectable levels of HIV.

Yet I have three times almost died.

I spent most of last year in hospitals. Hospital care in this city — New York — is awful and depressing, especially when they can’t find out what’s wrong with you, which was the case for me.

All of this has been very expensive. Even with ample insurance, the resources my husband David and I now have to get us through our declining years are diminishing. For the first time I am frightened, particularly for David, who is younger and who has sacrificed so much of his own career as a successful architect and designer to get us through all of this.

It was David, more than any doctor, who saved my life. I fear for anyone who suffers any serious illness without such a caring partner.

As the survivor population ages, our situation will be an increasingly common one.

I recently spent the day with staff and volunteers at New York City’s Gay Men’s Health Crisis. Under the dynamic leadership of the agency’s C.E.O., Kelsey Louie, and Board Secretary Roberta Kaplan, the organization (which was started in my living room in 1982) serves more than 9,000 clients and feeds several hundred every day. Many of the volunteers and staff of 90 are working there in memory of loved ones who died of AIDS. It was an exceptionally moving experience for me to be with them. They witness first hand and on a daily basis the impact of all I am talking about. They see the many difficulties patients face in their daily lives, the financial toll treatment imposes on families, the psychological impact it has on relationships, and the physical impact treatment has on many people (particularly as people age).

And now we have PrEP. We are learning that, like all HIV medications, it has side effects that manifest over time. Modest but significant bone density loss is now being seen in those taking Truvada (the only drug approved for PrEP) and more so in those taking a higher dose of Viread. Peak bone mass is an important predictor of fracture risk later in life.

New York City’s department of health is concerned about an increasing number of cases of sexually transmitted diseases like syphillis and gonorrhea. PrEP offers no protections against any of these. This very same department of health has seen fit to close down the public health clinic in Chelsea, the New York neighborhood where gonorrhea and hepatitis C numbers are especially out of sight .

The appointment of a new head of the Office of AIDS Research (OAR) at the National Institutes of Health has been delayed again.

OAR is where the research money is. Its director is the person who determines where that money should go, which researchersshould get it and what they should focus on. Its last director, Dr. Jack Whitescarver, a gay man whose tenure brought mixed reviews, retired on June 30. His impending departure was surely knowN for many months prior to June. One would think in a decent, well-managed, sensible, practical, and humane institution, his replacement would have been ready to seamlessly take over control on July 1.

But the NIH is none of these things. One is struck over and over how casually they waste time, and have done so for these 35 years (and counting) of this plague.

Several months ago, a small group of us (representing amFAR, GMHC, ACT UP, and Treatment Action Group) confronted NIH director Dr. Francis Collins, demanding to know what was happening, not only with a new OAR director, but also with the sorry state of their research.

It is no secret now that there’s no cure in sight and that Whitescarver and Dr. Anthony Fauci have been less than forthcoming about their failure to come up with very much. Dr. Fauci is the Director of NIAID, the National Institute of Allergy and Infectious Diseases, which should be in charge of AIDS, but he is a director who is not allowed to touch the money, which must come to him via OAR via Dr. Collins. Talk about a bureaucratic nightmare! And all these years, Dr. Fauci has led us to believe that he’s in charge.

“It’s clear that you have a limited time of effectiveness in Washington if you really are doing anything. If you’re not doing anything, you can stay there indefinitely,” said Dr. George Mueller, whose tough-minded management dauntlessly and successfully supervised getting a man on the moon and then immediately leaving NASA and Washington to return to the private sector. Dr. Fauci has been in Washington for some 40 years.

One in eight Americans infected with HIV still don’t know they have it.

According to Dr. Collins, a final candidate for the OAR director is expected in December or January at the latest. A search committee (which fortunately includes our Peter Staley) is currently reviewing the full packet of applications, and will be interviewing candidates on November 10. They’ll send their “short list” of three or four recommended candidates to Collins about a week later. At that point, their job is done, and Collins picks from this list. God only knows how long he’ll take, and God only knows how long the new head of OAR will take to figure things out, to settle in, to fund new research.

A former head of OAR called a moratorium for an entire year while he tried to learn everything he was meant to know. We do know Collins is more interested in Alzheimer’s than AIDS and Congress is not interested in AIDS at all.

Any sense of urgency at the National Institutes of Health, which by charter is meant to look after the health of all the American people, is invisible and relatively non-existent. Time is being wasted on a never-ending daily basis. That it will take this long to fill a vacated position for a new OAR chief is a perfect example of how this place wastes time. By Dr. Mueller’s definition they’re not doing anything. They’ve all been in Washington too long.

LARRY KRAMER is a founder of both GMHC and ACT UP. Volume One of his history of this plague,The American People, has just been published. Last year Yale University awarded him an honorary Doctor of Humane Letters.