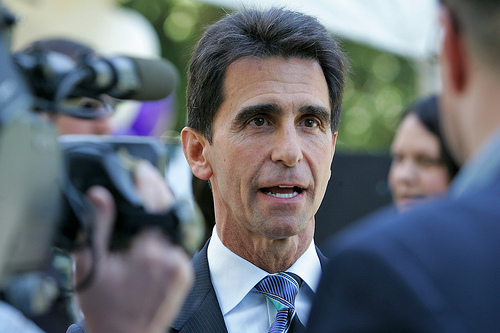 Jurors in California can no longer be excluded based on their gender identity, while out-of-state companies that do not cover transgender health benefits for their employees are barred from competing for state contracts.

A third bill signed allows transgender crime victims, as well as anyone subjected to violence due to their sexual orientation, to bring a civil action for damages against the responsible party, and a fourth bill adds protections for transgender foster youth. All four pieces of legislation will go into effect January 1.

Sunday, October 11 – National Coming Out Day – Brown signed SB 731 by gay state Senator Mark Leno (D-San Francisco), which requires the consideration of gender identity when officials place youth in the state’s foster care system. Supporters argue that the policy will result in transgender foster youth being placed in appropriate homes where they feel safe and accepted.

“Young people have a better opportunity to thrive in situations where they are fully accepted and supported for who they are,” stated Leno. “Entering the foster care system is challenging for all youth, but it can actually be damaging for young people whose identities are not affirmed by their caregivers and peers.”

Equality California, the National Center for Lesbian Rights, and Transgender Law Center co-sponsored the bill. The advocacy groups pointed to studies showing that LGBT youth are at higher risk for homelessness, abuse, depression, and suicide, with transgender youth particularly at high risk for poor health outcomes due to the rejection and harassment they face.

Those risks, they noted, are magnified for young people in foster care, many of whom have already experienced significant trauma.

“By signing SB 731 into law, Governor Brown has taken an important step toward making the foster care system safer and more supportive for transgender youth,” said Transgender Law Center Executive Director Kris Hayashi. “This is critical for a population of young people whose identities are too often rejected and attacked by the systems put in place to support them.”

Four days prior, on October 7, Brown signed Leno’s SB 703, which requires out-of-state companies bidding on state-funded contracts to offer their transgender employees the same benefits other employees receive. California-based companies are already required to do so.

The bill prohibits a state agency from entering into a contract in the amount of $100,000 or more with any company that does not offer equal benefits based on an employee’s gender identity.

“California law already stipulates that employers cannot deny transgender people health care and other benefits, but a loophole in state law has allowed companies that contract with the state to refuse equal health coverage,” noted Leno. “This bill closes that loophole. Denying equal benefits to employees at the same company based on gender identity is harmful and wrong. It also can jeopardize employee health and strain publicly-funded programs that fill in the gaps when employers don’t provide the same benefits to everyone.”

“With a third of transgender people reporting having been denied health care coverage, this law is an important step in improving the health of all members of the LGBT community,” stated EQCA Executive Director Rick Zbur. “It also sends an important message. If you want to do business in California, you have to treat all your employees equally.”

NCLR government policy director Geoff Kors noted that the legislation makes California the first state in the nation to refuse to contract with businesses and other entities that discriminate against their transgender employees in benefits.

“This legislation will not only help transgender employees, but will also help California businesses since California already prohibits health insurance carriers from denying transgender individuals benefits offered to non-transgender individuals and will thus level the playing field with entities from out of state that bid for contracts with California,” stated Kors. “Once again, California’s governor and Legislature are leading the nation in ending discrimination and ensuring that taxpayer funds don’t go to those who discriminate.”

Earlier this summer Brown had signed into law the other two bills. In August he signed AB 830, authored by lesbian Assemblywoman Susan Talamantes Eggman (D-Stockton), chair of the California Legislative LGBT Caucus.

The bill clarifies that legal remedies for the victims of violence motivated by a person’s gender are also available to transgender individuals and others targeted because of their sexual orientation or gender identity.

In July Brown signed AB 87, authored by Assemblyman Mark Stone (D-Monterey Bay), prohibiting peremptory challenges during the jury selection process of a prospective juror based on an assumption they will be biased because of his or her gender identity, gender expression, ethnic group identification, genetic information, or disability.

Under existing law, noted EQCA, peremptory challenges are prohibited for most, but not the above, protected classes of individuals.

“This new law will take a modest but necessary step to ensure that defendants are allowed a trial by an impartial jury that reflects a cross section of the population in a community,” stated Stone. “Additionally, without this protection, prospective jurors could be denied the right to participate in the justice system and complete their civic duty.”