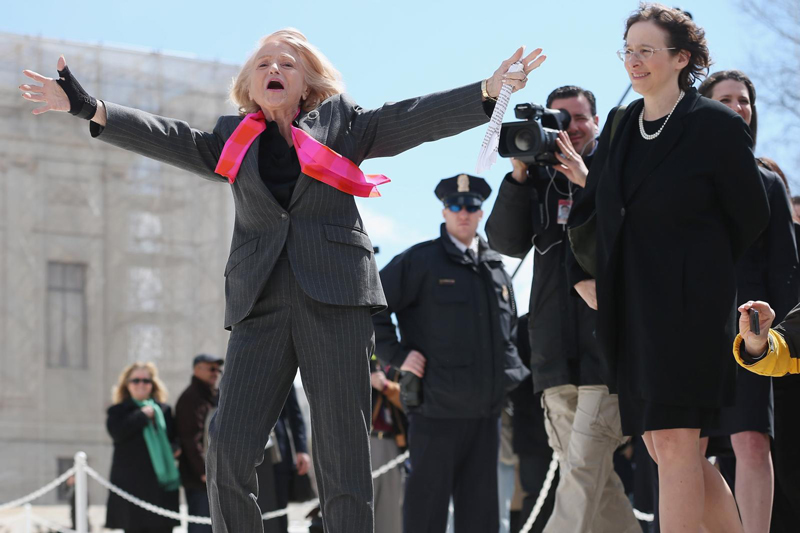 ⚫ BY DAVID EHRENSTEIN  “‘Yes,’ I told her, ‘I’m gay.’ My mother did not say a word. She simply walked to the edge of the room and started banging her head against the wall. Bang. Bang. Bang.”

So goes a startling passage early on in Roberta Kaplan’s book Then Comes Marriage, detailing how her legal team successfully overturned the so-called “Defense of Marriage “ in 2013, paving the way for “Obergefell v. Hodges”  in 2015 which established the right of same sex couples to marry. What does Roberta Kaplan’s mother have to do with this?  Plenty. For when Kaplan first began to represent cases in which marital rights were tangentially involved, “Obergefell” was not merely a dream, it barely figured on the horizon of gay and lesbian political consciousness. Winning basic civil rights was the goal, therefore “Marriage Equality” was putting the cart before the horse. But as Kaplan’s book demonstrates, it was that cart that drove the horse; pushing the “head bangers” aside.

While “Marriage Equality” was achieved in what seems now like “all deliberate speed” it certainly didn’t seem so to her. Back in 1996 it “wasn’t anywhere a reality in the United States.” Kaplan was representing “Family law” cases involving gay and/lesbian couples and their children, often losing them to  judges visibly sneering and audibly chuckling as she advanced the then-radical notion at gays and lesbians were not only capable of forming serious long-term relationships with one another but that such relationships were worthy of respect. Forget “Marriage Equality.” In an atmosphere like this, getting what she calls a “better dissent” from a jurist was often her goal.

Needless to say Kaplan wasn’t just a lawyer but an obvious beneficiary of the cases she was handling. She relates her evolution as an “out and proud” lesbian, winning back her mother’s regard, and falling in love with fellow lawyer Rachel Lavine. Like all same-sex couples back then they were less than “second-class citizens” in the eyes of the law. They applied for Domestic Partnership in New York knowing “we’re not getting married.” And so they did marry in Canada and went on to have a child through in vitro fertilization. Being recognized as this child’s ‘co-parent” was in no way a simple matter. Kaplan’s recounting of the visit of a state official to their home to examine how their family functioned is especially interesting. The official wanted to know how the boy would deal in the years ahead with “not having a father” as opposed to his schoolmates. Kaplan wittily retorts that said classmates might be in the same situation thanks to divorce, remarriage and outright abandonment, so common among heterosexuals, yet taken for granted.

What was hovering over the heads of so many same-sex couples, like Kaplan and Levine was the so-called “Defense of Marriage Act”?  It was a noxious piece of homophobic legislation established in 1996 in order to undermine those states that had voted in favor of same-sex marriage by declaring “marriage” and “spouse” to apply only to heterosexual unions, and that states need not recognize the “Marriage Equality” provisions made by other states. It was signed, Kaplan notes by President Bill Clinton “in the dead of night;” underscoring that in politics a great many of our so-called “friends” might be only of the “fair weather” variety.

In the “Windsor” ruling, Justice Anthony Kennedy declared “The federal statute is invalid, for no legitimate purpose overcomes the purpose and effect to disparage and to injure those whom the State, by its marriage laws, sought to protect in personhood and dignity.” And Edie Windsor was the literal embodiment of “personhood and dignity.”  A former technology manager at IBM, Edie Windsor today is quick to admit that she was very much ‘in the closet” when she “came out” as a lesbian. . . to herself alone. She knew little of “the gay world,” asking an acquaintance “Where do the lesbians go? “ She found out and in 1965 met and fell in love with Thea Spyer, director of the Psychiatric Clinic at the International Center for the Disabled and was Clinical Consultant in Rehabilitation at St. Vincent’s Hospital, Westchester before eventually concentrating exclusively on her private practice.  In 1968 the two women moved in together. But such was Edie’s reticence at acknowledging this to her co-workers, that she invented a relationship with Spyer’s fictional brother “Willy” in order to take calls from her at the IBM office.

But times – and Edie – changed. In 1993 she and Thea registered as domestic partners and in 1993 married in Toronto Canada.  Thea suffered from progressive multiple sclerosis.  In 2002 she was told had less than a year to live but such was not the case and she and Edie were married in Toronto in 2007. In 2009, at 77 years of age, Thea died leaving Edie the executor and sole beneficiary of her estate via a revocable trust. Because their marriage was not recognized by the government of the United States Windsor, was required to pay $363,053 in federal estate taxes. Had federal law recognized the validity of their marriage, Windsor would have qualified for an unlimited spousal deduction and paid no federal estate taxes

On meeting Edie Windsor, Kaplan immediately recognized that the challenge she and other lawyer/activistswere trying to mount against DOMA had found its perfect plaintiff. Her story, coupled with her style and infectious vivaciousness made Edie ideal plaintiff not only to the court but the LGBT community as whole.

“In the end,” Kaplan declares ,“ ‘it’s all about Edie’ is really only another way of saying it’s all about dignity.”  But as this exhaustively detailed but thoroughly engaging book proves it’s also  it’s all about stopping the likes of Roberta Kaplan’s mother from going “Bang Bang Bang .”