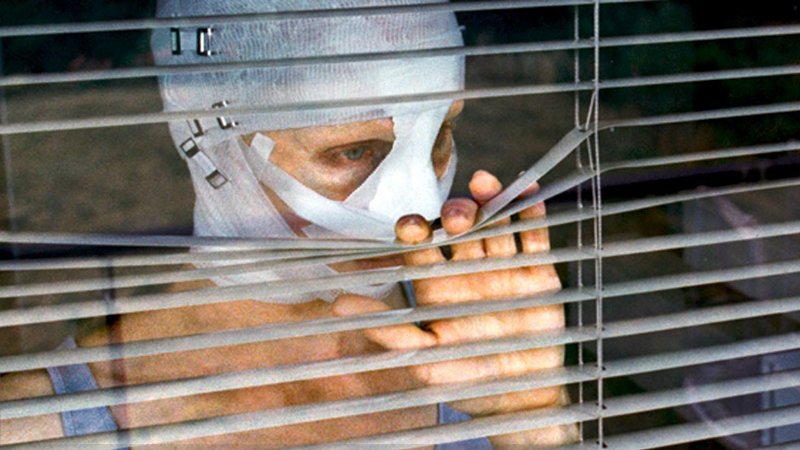 ⚫ BY JOHN PAUL KING  With Halloween right around the corner, most of the cool kids will want to include an outing to a nice, creepy horror flick amongst all the other seasonal festivities.  If that includes you, but you are bored to death by variations on the “Found Footage” formula (and their perfunctory cheap scares), you might want to seek out a showing of Goodnight Mommy.  Written and directed by Veronika Franz and Severin Fiala, it was Austria’s 2014 submission for the Best Foreign Language Film category at the Academy Awards.  It didn’t get the nomination- but don’t let that dissuade you from seeing it.

Set at an isolated house in a deceptively tranquil woodland, Goodnight Mommy evokes a modern-day Grimm’s Fairy Tale as it introduces us to Lukas and Elias, a deeply-bonded pair of twin pre-teen brothers whose mother has just returned home from having extensive facial surgery.  Almost immediately it becomes apparent to them that more has changed about her than just the features still concealed beneath those intimidating bandages.  Her personality is different: she is colder, harsher, and, worst of all, inexplicably intent on driving a wedge between her two sons.  Gradually they become convinced that she is an imposter, and they begin an effort to expose her- but soon it becomes clear that the biggest question may be how far they are willing to go to discover the truth.

There are a lot of things that grab you right away about this movie.  The opening sequence, in which we first see the twins roaming together through a cornfield, immediately sets the tone.  They (and we) are inside a vast bubble of isolation, one which seems serene and peaceful but is in fact alive with unseen and vaguely unsettling activity- revealed by the carefully orchestrated soundscape of buzzing insects and rustling winds, just the beginning of a soundtrack which favors natural ambience over the use of music.  There is a score, but it only emerges for brief and infrequent intervals, and is all the more effective for it.  Then there is the cinematography, the opposite of what you see in the Paranormal Activity movies and their ilk.  Instead of a herky-jerky handheld camera, we get the stately elegance of widescreen, 35mm photography with the kind of artful framing and clean lines that make the film as good-looking and stylish as the country house of its setting.

All this technical excellence makes it clear that Goodnight Mommy is not a film made by hacks, but it would count for far less if the content were not on the same par.  The directors make sure that it is: their script is complex and tantalizing, doling out clues and hinting at secrets even as it provokes us with new mysteries and confronts us with surprises.  We know from early on that we are being manipulated; Franz and Fiala show us the world only through the eyes of the two young protagonists, carefully filtering our perceptions through them and making us both dread and anticipate the shift in perspective which we sense must be coming.  This sense of impending menace is compounded by the performers: real-life twins Lukas and Elias Schwarz are perfectly cast, exuding both sweet sadness and a kind of otherworldly distance which makes them the perfect blank slate upon which to hang the audience’s expectations; and Susanne Wuest, as Mother, walks the thin line between being menacing and sympathetic with dexterity, keeping us unsure, almost until the very end, whether we should fear her or feel for her.

Of course, it wouldn’t be much of a horror film if there were not also some outright creepy, maybe even gruesome imagery along with all the psychological unease, and although I don’t want to give anything away, I can promise that it delivers (and that if you are squeamish about bugs, you might want to be prepared to look away a few times).

Goodnight Mommy does have its flaws.  The cost of keeping its characters ambiguous enough to preserve our uncertainty is that sometimes it’s hard to connect with- and therefore care about- any of them; and like many horror films, the story hinges on a gimmick, one which will probably be fairly obvious to most savvy moviegoers pretty early on.  Nevertheless, the film works superbly because it doesn’t rely on standard elements of genre formula to have its unsettling effect.  Again, I don’t want to give anything away, but Goodnight Mommy disturbs because it reveals real-life horror, the kind that makes us lie awake at night and worry about those we love.  In the end, it seems more tragedy than thriller.