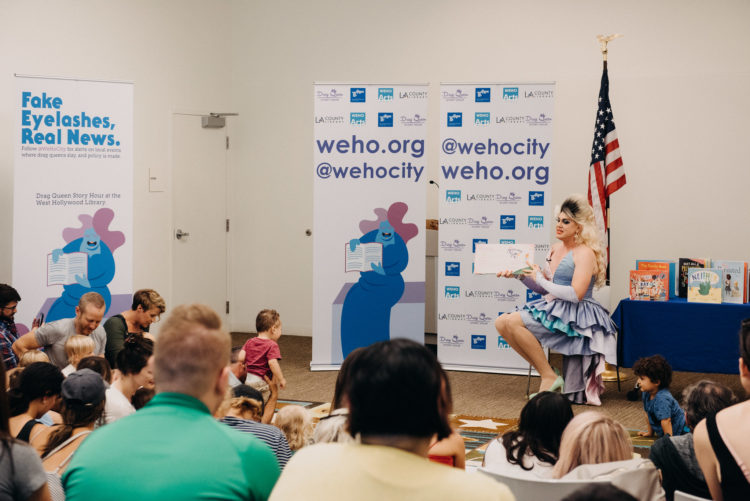 The City of West Hollywood brings to life an online hour like no other via Virtual Drag Queen Story Hour.

Normally Drag Queen Story Hour had been hosted on the fourth Saturdays of even numbered months from 11-11:45am in the West Hollywood Library Community Meeting Room.

Since the restrictions set in place due to the Corona-virus pandemic children of all ages are prevented from sharing the fun in person but can now enjoy all the “fabulousness” at home with  virtual Drag Queen Story Hour.

Drag Queen Story Hour is exactly what it sounds like: glittering magical drag queens capturing the imagination, playfulness, and gender fluidity of childhood, while giving kids glamorous, positive, and unabashedly queer role models to look up to. At Drag Queen Story Hour, children are able to see people who defy rigid gender restrictions and imagine a world where people present as they wish — a world where dress up is real.

In so many ways, drag queens are the perfect people to read out loud to little ones. Not only do they capture the imagination, playfulness and gender fluidity of childhood but they offer strong LGBTQ role models and the empowering message that it’s okay to be yourself.

Due to the COVID-19 emergency, all in person events in West Hollywood have been cancelled, and instead the City of West Hollywood’s Arts Division is presenting these Drag Queen Story Hour productions online until December 31, 2020, because reading is fundamental.

The virtual events hope to spread the light and joy of Drag and storytelling to as many kids and adults as possible especially during such a tumultuous time.

To view the events visit the City of West Hollywood’s Arts Division YouTube Channel at http://bit.ly/DQSHweho