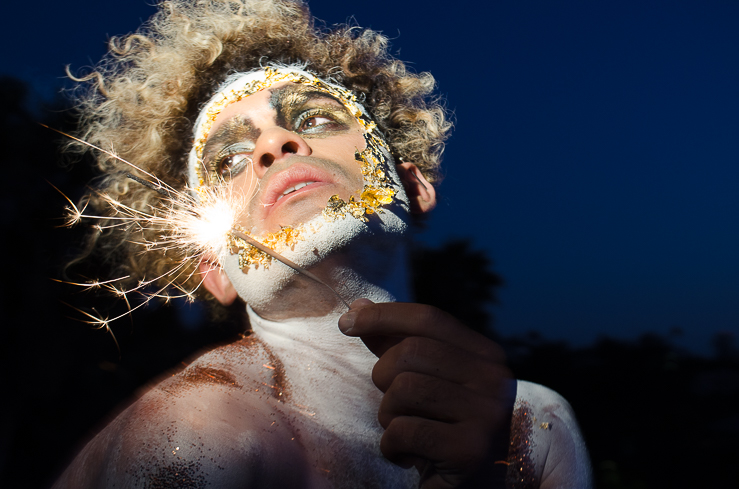 As a child growing up in Manhattan, Los Angeles based performer, Enrique Jesus Hernandez, called 911 more times than he can remember. “My mom was essentially a single mom, and unfortunately in her relationships, there was a lot of violence,” he said.

Countless trips with his mother to the E.R. and an incessant cycle of abuse left young Hernandez numb. Only as an adult, and away from the violence, was the artist able to begin healing childhood traumas and he used music as the tool.

Through his E.P. Hunger City, Hernandez wanted to send a message of hope to others experiencing similar suffering. Inspired to do more through performance, after the release Hernandez created gAYGUTs a monthly event at Boardners in Hollywood where healing happens through performance and art, and anyone Queer in Los Angeles can experience community.

In his song The Base Hernandez sings, “there’s a base in my brain I stand there stunned, and my bones remain encased.” He said this explains the “shutdown element” that is the only way a child can escape a situation where they are trapped, powerless while a parent suffers domestic abuse.

“The overwhelming state of my circumstance would just numb me, and I’d go to this place in my brain where I was in some type of case…That’s where I’d go so that time would go by and if time went by then the sun would come up, and if the sun came up it was time for school, and if it was time for school I’m out of the house. Time was always on my side; if I could just hold onto this, thank God time continues to move forward without me having to do anything with it,” said Hernandez of being a small boy enduring the attacks upon his mother.

In other lines of the song, Hernandez sings that the walls keep giving him their backs. Explaining that the barriers a victim builds for protection can ultimately block outside help. “This cycle of trying to protect oneself but then also preventing resources to come in results in this paralyzing hopelessness,” he said.

The feeling of hopeless a victim suffers is something Hernandez wants to help eliminate in those listening to his music. “I want them to hear this and think if this piece of music exists in the world, then it means that it has happened with someone else which means that ‘I’m not the only one’ which means that there might be hope,” he said.

The gAYGUTs live show, held once a month at Boardners in Hollywood, is an extension of this concept. The idea that no one should feel isolated suffering through any situation in which they find themselves alone. Unity Through Vulnerability is the gAYGUTs mantra.

Entertainment for the evening varies from pop to rap, spoken word to any manner of performance art. What unites the night is that it is a safe place for Queer artists to spill their “guts” something Hernandez hopes leads to having “really truthful expressions of Queer Artists be normalized.”

Once a month gAYGUTs happens at Boarders in Hollywood at 1652 N Cherokee Ave, Los Angeles. Follow @_gAYGUTS_ on Instagram for show dates.

Enrique Jesus Hernandez will be performing Hunger City at Long Beach Pride on Saturday and Sunday, May 18 and 19.

On Monday, May 13, gAYGUTs is teaming up with Queer Mondays Long Beach for a  pre-Pride show.