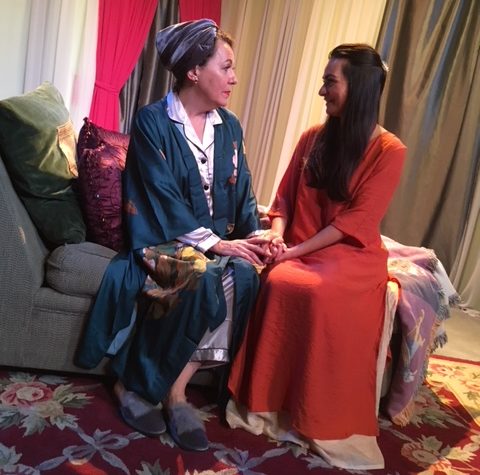 Get ready for an evening of fast pace entertainment, L.A. In the world of flash fiction, one might read incredibly dense prose of Franz Kafka or George Saunders and wonder about the world in which we live. But what about when the short form is taken to the stage? Bernadette Armstrong and Wendy Winter are putting on An Evening of 1 Acts at Theatre Unlimited in North Hollywood, and it is not a production you want to miss!

Armstrong’s “Joan” is an imaginary, poignant tale of  legendary Joan Crawford’s journey through the afterlife. It is paired with Wendy Winter’s “What Did They Say,” an LGBTQ-themed family dramedy.

About “What Did They Say?”

“What Did They Say” explores gender and sexuality in an unconventional family, taking place in Los Angeles today. As experienced in today’s rough political climate, families don’t always share the same values. Family members can be rough among themselves, and where Julian’s dad is gay, and his older sister Harper identifies as a dyke, his twin sibling Felicia struggles to understand Julian’s gender identity.

REVIEW: “Your play was FANTASTIC – funny, interesting, intriguing, complex, contemporary, and completely captivating from the first line!  And so well cast!  Your actors fit perfectly and did such a great job! Great set design and loved the set change also!  Especially when the characters helped and added their flair to even the set change!  And the direction was spot on. “

“Joan” is an imaginary tale of Joan Crawford’s journey through the Bardo and her adjustment to the fact that her soul will move onto the unknown. During this dream state Joan reflects on her life, her career, her enemies, her loves and those that helped create the film legend she became.

REVIEWS: “Very interesting concept about death and the afterlife. We discussed all the aspects of it on our way home. What a beautiful way to portray moving on.”

“Goreti da Silva embodies Joan Crawford from the moment she steps on stage.”

“Loved it. How do you come up with these ideas?”

An Evening of 1 Acts runs from March 22 through April 6, at Theater Unlimited, located at 10943 Camarillo St. in North Hollywood. Shows are on Fridays and Saturdays at 8 p.m. Tickets are $20 and can be purchased at: https://aneveningofoneacts.brownpapertickets.com/ or at the door.