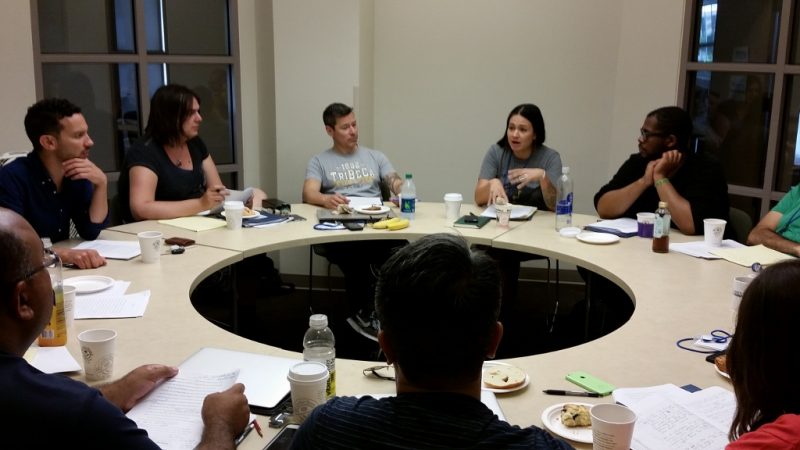 Attendees will find themselves at the August 2019 retreat at the campus of Otis College of Art and Design in Los Angeles, where they will have access to intensive and sophisticated instruction to selected writers over a carefully designed one-week period.

“Retreat provides writers access to industry professionals and the opportunity to advance in their craft and careers,” the Lambda Lit website states. “It is one of Lambda’s most dynamic initiatives: it represents the future of LGBTQ literature.”

Applications are open now until February 1, 2019. Applicants of the Retreat submit prose, poetry or theatrical manuscript pages that are evaluated for craft, creativity and originality. 12 students per workshop will be accepted into the program. Application fees are $25. All applicants will be notified about their status by April 29, 2019. If accepted, the cost of the program, which includes room and meals, is $1,650. Scholarships are available. For more information, CLICK HERE.

About the Workshop Leaders

Tim Murphy is the author of the novels “Getting Off Clean,” “The Breeders Box,” “Christodora” and “Correspondents.” He is also a longtime journalist on HIV/AIDS and LGBTQ issues for places including The New York Times, New York magazine, The Nation, Poz, thebody.com and the magazines of the ACLU and Lambda Legal. His novel “Christodora” was longlisted for the 2017 Andrew Carnegie Medal for Excellence in Fiction. He has once won and another time been nominated for Best Magazine Article by the GLAAD Media Awards. He has taught journalism at City College in Harlem and both journalism and fiction at Arts and Letters middle school in Brooklyn. He was an early organizer of the activist groups Gays Against Guns and Rise and Resist. He lives in Brooklyn and is at work on a new novel.

Benjamin Alire Sáenz is an author of poetry and prose for adults and teens. He is the winner of the PEN/Faulkner Award and the American Book Award for his books for adults. “Aristotle and Dante Discover the Secrets of the Universe” was a Printz Honor Book, the Stonewall Award winner, the Pura Belpre Award winner, the Lambda Literary Award winner and a finalist for the Amelia Elizabeth Walden Award. His first novel for teens, “Sammy and Juliana in Hollywood,” was an ALA Top Ten Book for Young Adults and a finalist for the Los Angeles Times Book Prize. His second book for teens, “He Forgot to Say Goodbye,” won the Tomás Rivera Mexican American Children’s Book Award, the Southwest Book Award and was named a New York Public Library Book for the Teen Age. He teaches creative writing at the University of Texas, El Paso.

Danez Smith is a Black, Queer, Poz writer and performer from St. Paul, MN. Danez is the author of “Don’t Call Us Dead,”  winner of the Forward Prize for Best Collection, the Midwest Booksellers Choice Award, and a finalist for the National Book Award, a winner of the Kate Tufts Discovery Award and the Lambda Literary Award for Gay Poetry. They are the recipient of fellowships from the Poetry Foundation, the McKnight Foundation, the Montalvo Arts Center, Cave Canem, and the National Endowment for the Arts. Danez’s work has been featured widely including on Buzzfeed, The New York Times, PBS News Hour, Best American Poetry, Poetry Magazine, and on the Late Show with Stephen Colbert. Danez is a member of the Dark Noise Collective and is the co-host of VS with Franny Choi, a podcast sponsored by the Poetry Foundation and Postloudness. Danez’s third collection, “Homie,” will be published by Graywolf in Spring 2020.

Mfoniso Udofia, a 1st Generation Nigerian-American storyteller and educator, attended Wellesley College and obtained her MFA in Acting from the American Conservatory Theater. During her stay in the Bay, she co-pioneered youth initiative, The Nia Project, providing artistic outlets for youth residing in Bayview/Huntspoint.

Mfoniso is a former Playwrights Realm Page One Resident and, in January 2016, Playwrights Realm produced the World Premiere of Sojourners, the origin story of the Ufot Family Cycle. In Spring 2016, The Magic Theater in San Francisco produced the West Coast Premiere of Sojourners and the World Premiere of the third installation in the Ufot Family Cycle, runboyun, in repertory with each other. New York Theatre Workshop produced the return of Sojourners to New York City in Spring 2017, which ran in repertory with the World Premiere of Her Portmanteau, and was previously developed at the National Black Theatre in an I Am Soul Residency in 2015. Her Portmanteau had its West Coast Premiere at Boston Court Performing Arts Center in Pasadena, CA. Mfoniso is also currently at work on a commission from the Oregon Shakespeare Festival translating Shakespeare’s Othello, through their Play On! program. She has four upcoming productions: Her Portmanteau (American Conservatory Theater, Winter 2019), In Old Age (A Magic Theater World Premiere, Spring 2019), runboyrun (A New York Theatre Workshop East Coast N Premiere, Fall 2019) and In Old Age (A New York Theatre Workshop East Coast Premiere, Fall 2019); and, she is a staff writer on the 3rd season of Netflix’s, 13 Reasons Why.

Mfoniso’s plays have been developed at and/or presented/produced by Playwrights Realm, The New Black Fest, Rising Circle’s INKTank, At Hand Theatre Company, The Standard Collective, American Slavery Project, Liberation Theatre Company and more. Mfoniso is the recipient of the 2017-2018 McKnight National Residency and Commission at The Playwrights’ Center in Minneapolis and a Resident Playwright at New Dramatists.

Linda Villarosa runs the journalism program at the City College of New York and is a contributing writer to The New York Times Magazine. In June 2017, she wrote the Magazine‘s cover story “America’s Hidden Epidemic,” about HIV/AIDS among black gay/bisexual men in the South. In April 2018, her article “Why America’s Mothers and Babies Are in a Life or Death Crisis,” also ran on the Times Magazine cover. Linda is the author or co-author of a number of books and is working on Under the Skin: Race, Inequality and the Health of a Nation to be published by Doubleday.