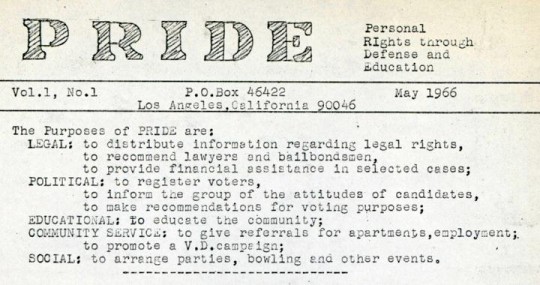 Considered a more radical LGBTQ+ activist group, Personal Rights in Defense and Education (PRIDE), was founded in 1966 and paved the way for radical protests and demonstrations much needed fro the advancement of LGBTQ+ Civil Rights.

Steve Ginsburg founded the group in 1966 to counter the quiet, conservative of activist predecessors. PRIDE was notorious for, well taking pride in oneself. The organization made it clear that youthful, overt sexuality was not shameful. PRIDE is considered by many to be the origins of the word “pride” being used for queer politics.

PRIDE not only worked with local gay bars to provide safe gathering spaces for the gay community, but it organized large groups for activism. Ginsburg targeted the disenfranchised queer youth to effectively mobilize. After the infamous raid on the Black Cat Tavern in 1967, PRIDE quickly organized street demonstrations against police brutality and LGBTQ+ Rights. To days later, the Stonewall Riots were in full swing in New York.

Aside from organizing protests, PRIDE also produced a monthly newsletter to inform the local queer community of its rights and safeties. The newsletter eventually evolved into the widely know publication, the Advocate. In late 1968, after pressure from the gay and straight community alike, PRIDE cease its aggressive radical approach and dissolved.