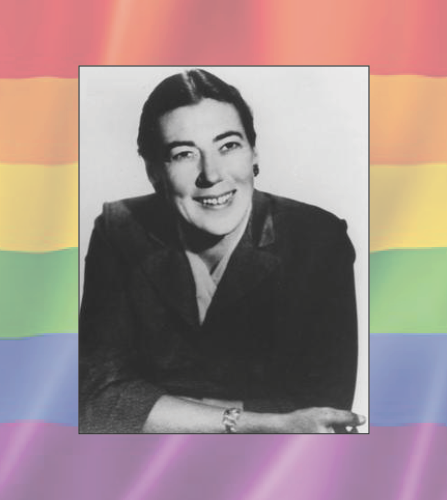 One of the larger, uphill battles for the LGBTQ+ community has been fighting the classification of “criminal” or “crazy.” One woman on the forefront of this battle was Dr. Evelyn Hooker. A psychologist teaching at UCLA in the 1940s and ‘50s, Hooker became infatuated with gay subculture of Los Angeles, and her research reflected as such. In 1952, the American Psychiatric Association (APA) included homosexuality under “sociopathic personality disturbance.” In 1954, Hooker applied for a National Institute of Mental Health grant to conduct a scientific study comparing homosexual and heterosexual men. In 1956, she presented her paper, “The Adjustment of the Male Overt Homosexual” at an APA meeting in Chicago. Her research showed that gay men are as well-adjusted as straight men.

In the 1960s, leaders of the gay liberation movement used the works of Hooker and other medical professionals to confront the APA and other mental health professional organizations. LGBTQ+ individuals were denied many basic rights under the law partly because homosexuality was designated a mental disorder. The designation also increased societal prejudices towards the LGBTQ+ community. However, in 1968, the APA changed the classification of homosexuality from “sociopathic” to “sexual deviation,” a step toward the acceptance of the queer community thriving in Los Angeles. In 1969, a National Institute of Mental Health study chaired by Hooker urged the decriminalization of private sex acts between consenting adults.

Hooker retired from her research at UCLA in 1970  and started a private practice in Santa Monica. Most of her clients were gay men and lesbians. Hooker died at her Santa Monica home in 1996, at the age of 89.