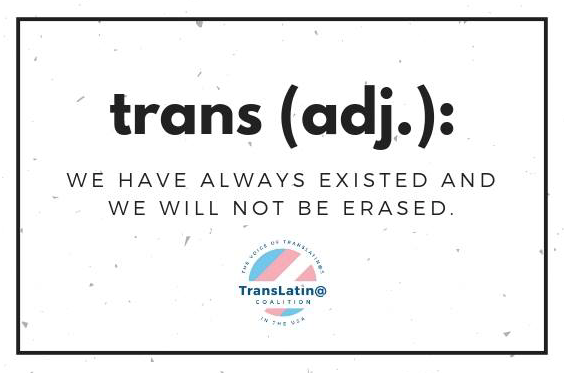 In response to the Trump Administration’s latest consideration to repeal basic civil rights for the trans community, the TransLatina Coalition is organizing a rally in Downtown Los Angeles tonight, Oct. 22 at 7 p.m.

“Trump is yet again planning a dangerous attack against our community on a federal level,” the Facebook event page reads. “But, like we always have, we are going to fight back for the rights and respect that we deserve. Trans and gender non-conforming people are deserving of equal treatment to those that are cisgender and we must stop being defined as ‘Other’ or mentally ill.”

The New York Times reported yesterday that the Department of Health and Human Services (DHHS) is “spearheading an effort to establish a legal definition of sex under Title IX.” DHHS argued in a memo that the NY Times reportedly obtained on Sunday, Oct. 21, 2018 that government agencies needed to adopt an explicit and uniform definition of gender that’s based on a biological basis that’s grounded in science and is “objective and administrable.”

“Sex means a person’s status as male or female based on immutable biological traits identifiable by or before birth,” the department proposed in the memo, as reported by the NY Times. “The sex listed on a person’s birth certificate, as originally issued, shall constitute definitive proof of a person’s sex unless rebutted by reliable genetic evidence.”

A law such as this would essentially eradicate and discredit the estimated  1.4 million Americans who recognize themselves as a gender other than the one they were assigned at birth.

The NY Times reported that a law such as this would be the “most significant” move in a series of decisions attacking queer civil rights granted during the Obama Administration era.

“What we are experiencing today, many of us have experienced it before and throughout history,” The DTLA rally event page reads. “Do not get discouraged, but this is a wake up call to solidarity.”

The TransLatina rally will take place tonight from 7–10 p.m. in front of City Hall at 200 N. Main St., Los Angeles For more information regarding the event, click HERE. Members of the transgender community are using the hashtag #WontBeErased online to document their experiences and promote trans visibility.