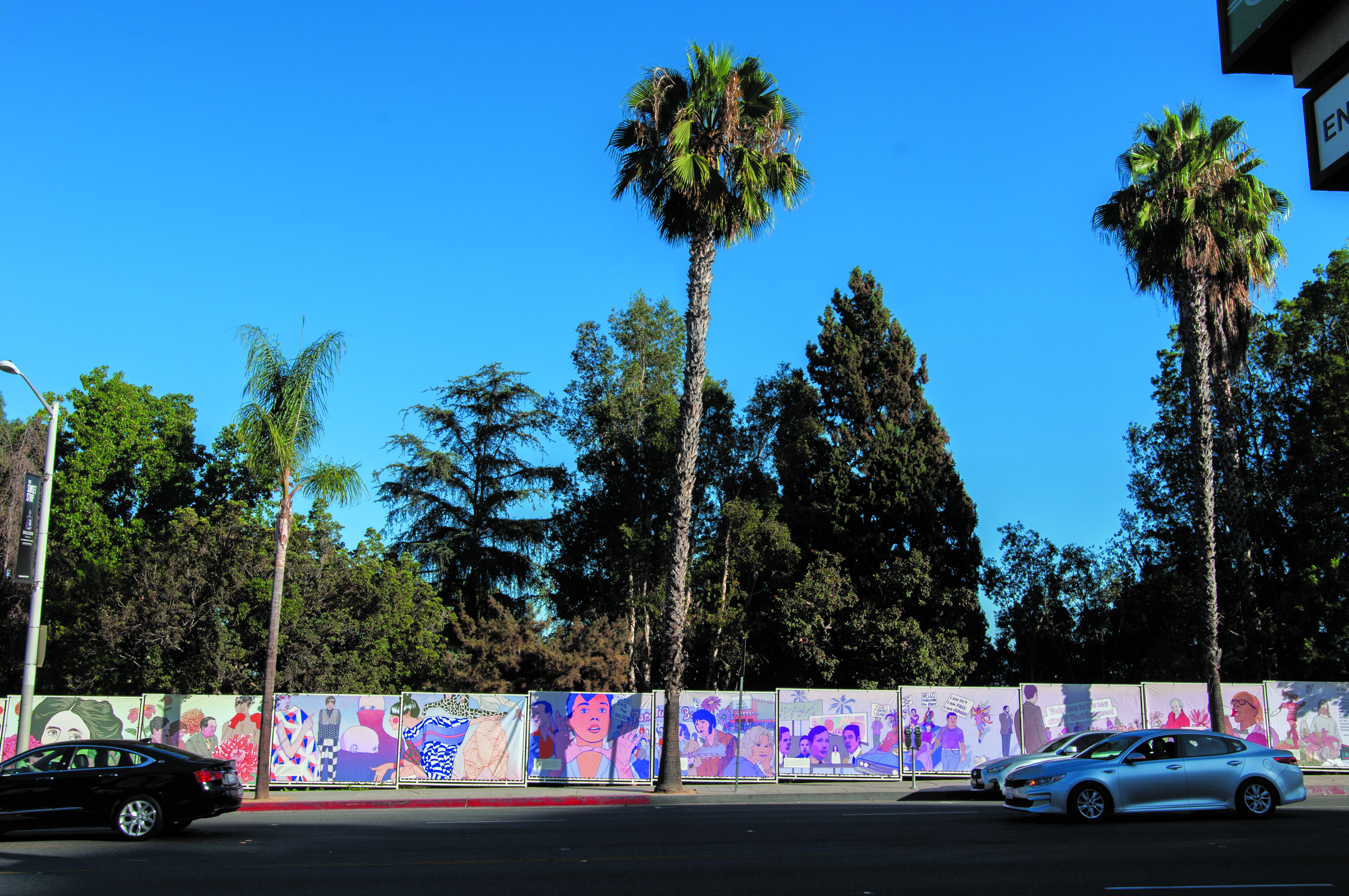 There’s a certain crispness in the air as one walks down Sunset Boulevard in West Hollywood as of late. Days are shortening and the leaves in William S. Hart Park are starting to turn and fall. This is a perfect evening to go for a stroll take in the enormity of the latest City of West Hollywood’s Arts Division instillation.

“A Mecca of Bold, Retold” is a 140-foot-long temporary mural by Aaron Glasson that highlights historic figures and significant events in the WeHo’s history. Scheduled to be displayed until the end of the year, the mural exemplifies the diversity and intersectionality that creates the West Hollywood community. The LGBTQ+ community is represented in seven of the 19 panels.

The mural is part of the City’s Art on the Outside program, which installs rotating artworks in public spaces throughout the City. Works include sculpture, murals and other outdoor works. Most works remain on display from between six months and three years, according to the City of West Hollywood website. This instillation was commissioned in celebration of the “Summer on Sunset: A Tribute to the Summer of Love” events promoted by the visitors bureau of the City of West Hollywood.

The seventh panel of the mural recognizes the evolution of the area during the silent film era,  as represented in the depiction of Russian immigrant and known bisexual Allah Nazimova. Her mansion, called The Garden of Allah, was located in Los Angeles, just outside of the City of West Hollywood’s border on Sunset Boulevard. Artists such as Nazimova were early trailblazers who set a precedent that attracted other like-minded progressive artists and activists to the area.

In panels 11 and 12, Avant-garde clothing designer Rudi Gernreich’s is depicted. His clothes are generally regarded as the most innovative and dynamic fashion of the 1960s, consciously pushed the boundaries of acceptable fashion. He used his designs as an opportunity expand society’s perception of what was acceptable. He was the first to introduce unisex designs and cutouts in clothing and designed the first thong bathing suit, the first swimsuit without a built-in bra, and the topless monokini. Gernreich and his lover Harry Hay co-founded the Mattachine Society, one of the earliest LGBT gay rights organizations in the United States. Their goal was to improve the rights of gay men. Gernreich later lived together in West Hollywood with his partner Oreste Pucciani, who was also a pivotal figure in the gay rights movement, until he died in 1985.

Panel 13 features gay rights activist Henry “Harry” Hay, Jr. In 1989, the West Hollywood City Council named him as Honorary Citizen of West Hollywood.  Also featured in this panel is actress, singer and gay icon Judy Garland. She lived just north of the Sunset Strip. She is famous for her role as Dorothy Gale in “The Wizard of Oz” (1939). She was the first woman to win the Grammy Award for Album of the Year for her live recording “Judy at Carnegie Hall” (1961), according to the City of West Hollywood website.

Panel 16 highlights the early days of the gay rights movement. The LGBTQ+ community in Los Angeles experienced the first gay-rights protests after officers beat gay patrons and arrested 14 people for same-sex kissing at the Black Cat bar on New Year’s Day in 1967. The first LA Pride Parade was organized in 1970 to commemorate the 1969 Stonewall riots.

Panel 17 takes us to 1984, the origin year of the City of West Hollywood. An unlikely coalition of LGBT activists, seniors and renters came together with progressive policies and strong tenants’ rights protections. The city was officially incorporated as an independent city on November 29, 1984.

Panel 18 looks at the current state of the LGBTQ+ community, highlighting  L.A. Pride and the  Resist March. In 2017, the colorful floats that were typically seen in the Pride Parade were replaced with people marching for human rights. The Resist March, harkening back to the roots of the original Pride Parade, was a demonstration of fighting for human rights, inspired by the massive women’s marches that took place across the globe the day after President Trump’s inauguration.

This mural is located at William S. Hart Park, located at 8341 DeLongpre Ave. and can be viewed facing Sunset Boulevard on the Sunset Strip. For more information, please contact Rebecca Ehemann, the City of West Hollywood’s Public Art Coordinator, at (323) 848-6846 or at rehemann@weho.org.