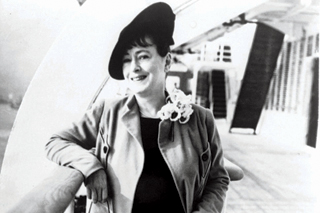 The cultural significance of West Hollywood is undeniable. From the lavish nightclubs that saw legendary regulars like Marilyn Monroe, Judy Garland, Dean Martin and Sydney Poitier to its love affair with all things rock and roll, it’s no surprise that West Hollywood’s motto is “The Creative City.” What began in 1886 as a portion of land to construct electric railways, West Hollywood has seen many transformations and acquired a history as richly diverse as its present. For as much as we may all know about West Hollywood and its storied past, there are many interesting facts about this unique city that have managed to remain relatively unknown.

Most gay men are familiar with the phrase, “I’m a friend of Dorothy,” and it would make sense to assume that Dorothy refers to Judy Garland’s iconic role as Dorothy in “The Wizard of Oz.” However, Dorothy’s ties are much closer to West Hollywood than somewhere over the rainbow. During the 1930’s, Dorothy Parker was a popular writer and socialite known for surrounding herself with gay men and throwing famous parties at Garden of Allah’s lavish celebrity villas. Gay men used the code, “I’m a friend of Dorothy,” as a secret password to gain entrance to these exclusive, wild events. “I’m a friend of Dorothy” soon became synonymous throughout the country as a way to secretly announce that someone was gay.

For as long as anyone can remember, West Hollywood has been home to thousands from the LGBTQ+ community, even when the rest of the world has been far less inviting. During the silent film era, when West Hollywood was unincorporated and named after real estate mogul Moses Hazeltine Sherman, opulent nightclubs like the famous Ciro’s and Mocambo appeared up and down Sunset Boulevard. West Hollywood lay just on the outskirts of the LAPD jurisdiction and its clubs became a haven that catered to the booming entertainment industry and allowed performers to go against societal norms, challenging sexual and gender roles.

Before becoming the Rainbow Bar & Grill in 1972, 9015 Sunset Boulevard was home to the famous, star-studded Villa Nova. It was the premiere choice for a romantic night on the town; in 1945 Vincente Minnelli proposed to Judy Garland, and in 1953, Marilyn Monroe and Joe DiMaggio had their first blind date. After becoming the Rainbow Bar & Grill, it became the rock and roll destination throughout the 70’s and 80’s, catering to legends like John Lennon, Alice Cooper, the Who, and Led Zeppelin. John Belushi had his infamous last meal at the Rainbow Bar & Grill before overdosing in his bungalow at the Chateau Marmont.

California has been the inspiration behind hundreds of songs throughout history, but a few special handful have specific ties to West Hollywood. Jim Morrison recorded the vocals for the Doors’ classic “LA Woman” in the bathroom of a makeshift studio in West Hollywood. Released in 1971, it helped to solidify the Doors as one of the most legendary rock bands to come out of that era. “Welcome to the Jungle,” released by Guns N’ Roses in 1987, is considered one of history’s greatest hard rock songs of all time. It was inspired by the 80’s metal culture along the Sunset Strip and the infamous Hell House, a coke- and booze-filled mansion in the jungle of West Hollywood, complete with groupies and strippers alike. Sheryl Crow’s 1993 hit “All I Wanna Do” from her debut album famously mentioned West Hollywood when she sang, “All I wanna do is have some fun until the sun comes up over Santa Monica Boulevard.”

With nearly half a million decked out, glittered up party goers in attendance, West Hollywood is home to the largest Halloween street party in the world. From La Cienega to Halloway Drive, Santa Monica Boulevard is taken over by the eccentrics, the creatives, and the very people that make West Hollywood as weirdly unique as it is. It’s a celebration that embodies the beauty in being different, the acceptance of all, and honors the colorful past that makes West Hollywood one of the most beautiful cities in the world.