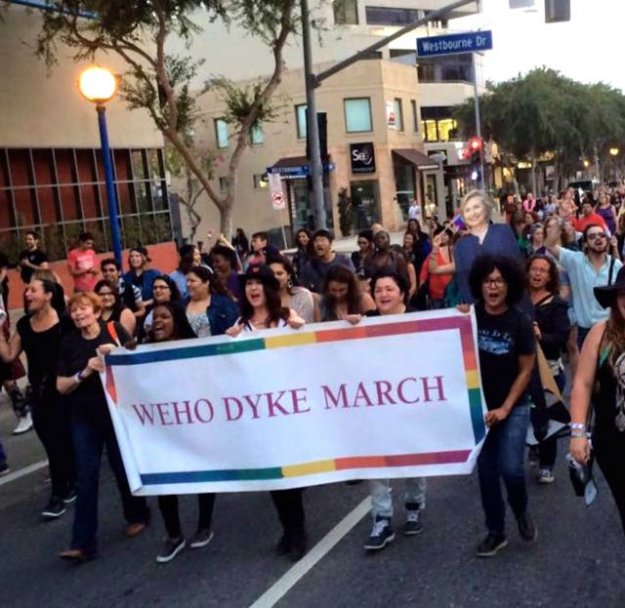 If you love Pride but are always longing for more lesbian/gay girl events, have no fear: WeHo has already taken care of it.

Per the city’s press release:

“The City of West Hollywood will present the annual Dyke March on Friday, June 8, 2018, with programming beginning at 6 p.m., at the Sal Guarriello Veterans’ Memorial, located at 8447 Santa Monica Boulevard.

The evening will kick off at 6 p.m. with a Live DJ set with Claudette Sexy DJ and a protest sign and pin-making workshop led by artist Julianna Parr, with all materials provided.  The rally will begin at 7 p.m. with guest speakers that include Gloria Bigelow (host/emcee),members of the West Hollywood City Council, members of the City of West Hollywood’s Lesbian & Gay Advisory Board, Angela Brinskele (June Mazer Lesbian Archives), Councilmember Vivian Romero (City of Montebello’s 1st LGBTQ Mayor), Alana Roshay (Community Activist), Chris Jackson-Baldwin (L Project LA), and Michaela Mendelsohn (TransCanWork). The Etheridge Award will be conferred to artist and activist Patrisse Cullors by members of the City’s Lesbian and Gay Advisory Board and accepted on her behalf by a representative.

The march down Santa Monica Boulevard to San Vicente Boulevard and back will begins at 7:45 p.m. When the march returns to the Memorial, and will be followed by another live DJ set by Claudette Sexy DJ, WASI, Kaleena Zanders, and Niña Dioz.

The Dyke March will kick off a weekend of events and programming for Christopher Street West’s Los Angeles Pride Festival and Parade in West Hollywood. For more information about Pride Weekend, including a full schedule of events, please visit www.lapride.org.

Each year, the City of West Hollywood celebrates the artistic contributions of the LGBTQ community with its vibrant One City One Pride LGBTQ Arts Festival. The festival runs for 40 days, from Harvey Milk Day on Tuesday, May 22, 2018 through Saturday, June 30, 2018, which marks the end of Pride month. A complete list of this year’s One City One Pride festival events is available atwww.weho.org/pride.”