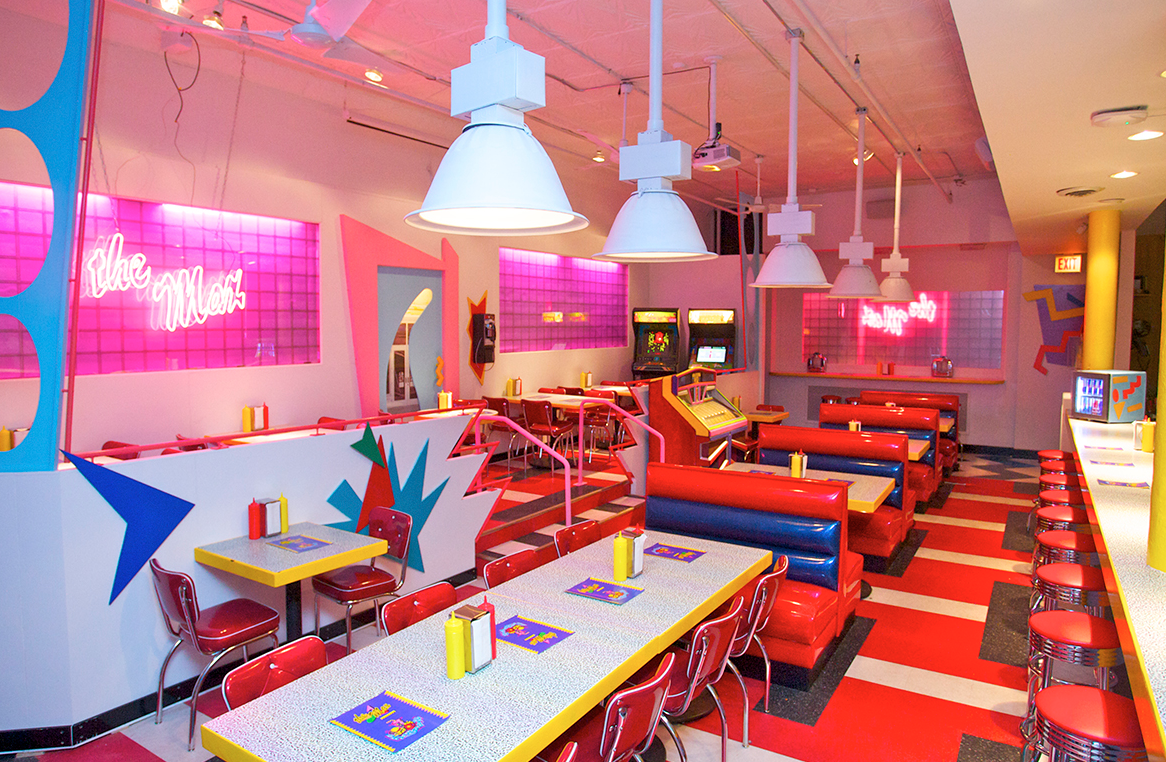 The 90s was the kind of decade that you didn’t really appreciate until it was all over. It was flannel shirts and Doc Martins, denim jackets and Keds, slap bracelets and jelly sandals. It was Lisa Frank Trapper Keepers, caboodles in every color under the sun, and lanyard as far as the eye could see. The 90s had a profound cultural impact that transcended time, and it’s safe to say that there was no other decade quite like it.

After a highly successful run in Chicago last year,  Saved by the Max, West Hollywood’s newest pop-up restaurant and bar, pays tribute to one of the greatest shows to come out of the 90s, “Saved by the Bell.” From 1989 to 1992, “Saved by the Bell” became a cult classic and turned its relatively unknown stars into household names. There wasn’t a teenager in America who didn’t have at least one poster of Tiffani Thiessen or Mario Lopez hanging up in their room.

Located at 7100 Santa Monica Blvd. and filled with all the nostalgia my tiny heart could handle, Saved by the Max is more than just a recreation of the Max. It makes you feel like you’ve literally stepped back in time and into your favorite television show. From the vinyl covered seats and black and white spotted table tops, to the geometrically challenged front door, every square inch of Saved by the Max perfectly captures all the subtle nuances of the classic hangout. Each detail brings the Max to life, from the pink and blue jukebox to arcade classics Zaxxon, Ultimate Arcade, and Defender.  With its locker-lined entry way to the bathroom and giant cut-outs of “Saved by the Bell’s” beloved cast, Saved by the Max is any avid Instagrammer’s dream come true.

Any true “Saved by the Bell” fan will appreciate all the references to some of the show’s most classic episodes, like that time Jessie Spano overdid it on the caffeine pills and had an epic meltdown singing, “I’m so excited! I’m so excited! I’m so…scared.” Or that other time when Bayside High students learned about the dangers of oil drilling after losing their beloved class pet, Becky the duck. Or that one time when Zack, Kelly, Lisa, Screech, and Slater formed Zack Attack and became instant rock stars with their hit song “Friends Forever.” (I could go on, but you catch my drift.)

Even the menu tastefully pays to tribute to Saved by the Bell with appropriately named appetizers like AC Sliders, Mac & Screech, the Snow White and the Seven Dorks, and Spano’s Seasonal Salads. Enjoy entrées like Tori’s Fried Chicken, the Kelly Kapowski, the Preppy Pastrami, the Beat Valley Buttermilk Pancakes, and my personal favorite, the Bayside Burger.  Add a side of Mr. Belding’s Fries, Miss Bliss’ Sausage, or Tiger’s Tofurkey, and finish it off with the Hey, Hey, Hey Pie of the Day, Snack Attack, or Max’s Magical Sweet Tooth. For the 21 and older crowd, the Attic offers libations like the Zachary Daiquiri, Lisa’s Spritzainaroni, the Mark Paul 75, and a wide range of wine, whiskey, cognac, and other spirits the gang would’ve been too young to drink anyway.

Maybe it was the great 90s music or the amazing staff that seemed to enjoy the ambiance just as much as I did (my waiter’s name was suspiciously Zac M.), but going to Saved by the Max, to keep it simple, made me happy. Even though there isn’t a snowball’s chance in hell I’d go back to that awkward phase I painfully endured throughout the 90s, I wouldn’t hesitate to go back to the all the things that made the 90s so special. Saved by the Max offers that perfect trip down memory lane, a reminder of the past in the heart of the present, and you don’t need to be a fan of  “Saved by the Bell” to truly enjoy it.

Learn more about Saved by the Max and book your reservations online at savedbythemax.com. Large groups can book a private party in Mr. Belding’s office (the one time it’s actually okay to be called to the principal’s office.)

By Keldine Hull May 23, 2018
Tags: Saved by the Bell, Saved by the Max, weho, west hollywood in WEST HOLLYWOOD
Related Posts