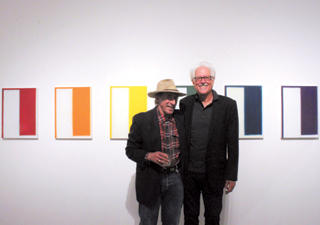 The William Turner Gallery hosted an opening reception Saturday, April 28, for artists Curtis Ripley and Peter Lotado. The exhibition featured Ripley’s recent work, a series of atmospheric paintings, as well as Lodato’s bi-chromatic paintings. Both artists are local to the Westside

In his new work “Chakras” the Venice artist Peter Lotado included a full-color spectrum of individually painted canvasses. He explained that “chakras are the spectrum of color, and red, yellow and blue are the colors in between.” His works are “reductive, divided compositions” and include “visual confrontations between the planar simplicity of form and the resonance of particular pigments.” As a graduate of California State University of Northridge (CSUN) he studied both psychology and art, but confessed that he has been painting since he was a child. “My mother was a painter,” he stated.

When asked about his process, he meditatively said “I think hard. I get nervous.  And then I do it. And then I get to look at it.” All of the works included in the exhibition were oil on canvass. They can be found inside the William Turner Gallery’s project room.

A graduate from the University of Wisconsin, Curtis Ripley, a Mar Vista artist, moved to the west coast in 1985. His latest works, “Nightfall” are atmospheric paintings that are influenced by poetry and music. The “gestures” and “rhythms” in his paintings are varied as he listens to a range of musicians and genres while working. “Duke Ellington, to classical, to Willie Nelson” he stated. Similar to the jazz styles of Ellington’s era, Ripley’s work is “improvisational” with strokes that “dance over the canvass.”

Additionally, his works include subtle poetic influence. He cited that he has painted the rhythms of a haiku as well as a sonnet. According to Ripley, he builds the atmosphere with brushes and rags of various widths, and sizes. The works that were included in the exhibition are “paintings from 2017 through 2018” he clarified. In addition to friends and associates, Ripley’s family was also in attendance. “My hope is to create paintings that are timeless, lyrical and full of life,” he concluded.