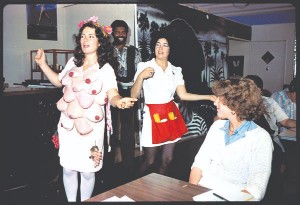 When we look to the past to try and conjure up and image of a lost world, we depend on records to tell us exactly how people looked,  sounded and lived during a time that’s too far away for us to remember.  Whether we get our information visually – through documentary footage, photos, or old video fragments – or from written histories, we need there to be some preserved version of the past available for us to learn from if we’re to remember what came before us, to study it, and to learn from it.

In 1978, a group of experimental Los Angeles artists got together to create a space for exhibitions of just this type: Performances, gatherings, and art showings that weren’t created with posterity in mind. Types of new, exciting art forms and practices that were meant to shake things up, not remain enshrined in art history books. Los Angeles Contemporary Exhibitions was born in Downtown L.A., a space dedicated to all things strange, striking, and fleeting. The space roughed it out through the rest of the late 70s and into the 80s and 90s, keeping L.A.’s underground art scene alive with collaboration and help from the likes of Mike Kelley, John Baldessari, Bill Viola, Adrian Piper, and Barbara Kruger. Included in LACE’s current archival collection are works by LGBTQ+ contemporary artists like Rafa Esparza and the queer-inflected works of Mike Kelley and Dorian Wood, whose performances continue to inspire new generations of L.A.-based experimental artists to create truthful, searing, fleeting works of art.

What remains of LACE’s past legacy is an archive documenting performance pieces and community events spanning from the very start of the organization to its current iteration, as a staple of the Hollywood arts scene. As of this week, the Getty Research Institute has acquired LACE’s entire, extensive archive and plans to use it to expand the community’s knowledge of L.A.’s thriving visual arts scene, past and present.

Glenn Phillips, curator and head of modern and contemporary art at the GRI, spoke of the archive’s importance in a recent press release, stating:

“Because the archive features so many important contemporary artists from Los Angeles and beyond, the material connects to and bolsters the GRI’s already rich holdings of experimental 20th-century artists, including feminist performance groups. Additionally, we have significant documentation of the alternative space movement that arose in the US in the 60s and 70s, a movement in which LACE stands out for its longevity and influence.”