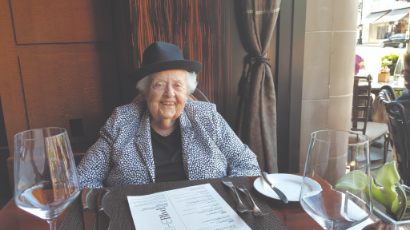 U.S. Representative Adam Schiff recognized 13 women for their work in improving life in the 28th Congressional District, which includes West Hollywood, in an Echo Park ceremony on April 5. Among the women recognized was established LGBTQ+ activist and West Hollywood resident Ivy Bottini, 91.

“These women have worked to found or support a myriad of charitable organizations, started multiple businesses and given so much of themselves to improve the common good,” Schiff stated. “They are all pillars of our communities, and I thank them for their invaluable service.”

A description of the honors described Bottini as “a legendary activist, professional artist, mother, award-winning actress and community leader. Renowned from coast to coast for her feminism and fight for the Lesbian, Gay, Bisexual, and Transgender community, she paved the way for many of the advances in civil and human rights we enjoy today.”

Among a sizable listing of Bottini’s fruitful works as an activist, the ceremony’s announcement includes that Bottini was a founding member of the first chapter of the National Organization for Women (NOW) in 1966.

“She designed the iconic logo for the organization, which is still in use today. In August of 1970 Ivy and over 150 of her fellow activists made headlines by unveiling a banner reading ‘Women of the World Unite’ over the pedestal of the Statue of Liberty.”

Bottini’s devotion to positive change in her community was even recognized by Jerry Brown:

“In 1981, she was appointed by Governor Jerry Brown to the California Commission on Aging, making Ivy the first ‘out’ lesbian or gay person to be appointed to a state board or commission.

She was instrumental as an advocate for affordable housing for gay and lesbian seniors in the opening of Triangle Square, the first in the nation assisted living, affordable income apartment complex for LGBT elders.”

“Ivy is an inspiration throughout the country. Her life’s work is an example of finding one’s voice and using it forcefully for the benefit of all Americans.”