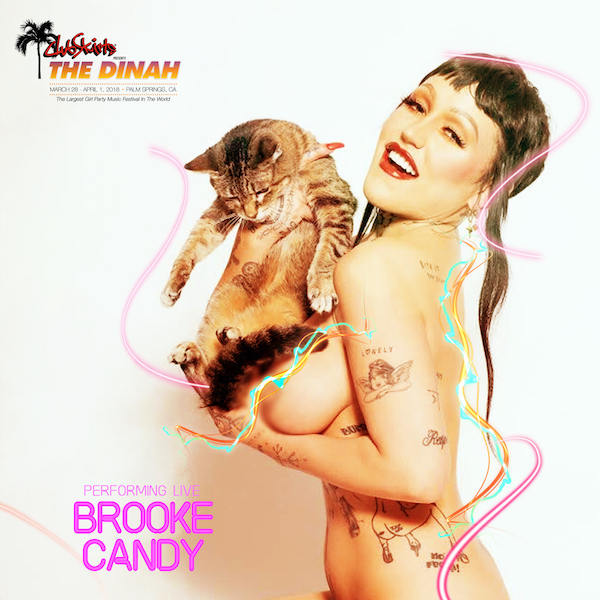 If you love lesbian getaways and provocateurs, this news is about to blow your stack!

Brooke Candy is going to headline Club Skirts during Dinah Shore weekend. Get ready for some O-P-U-L-E-N-C-E.

Per the press release:

“Brooke Candy is the latest artist announced to join the stellar entertainment line up of the 2018 world renowned Dinah Shore Weekend (March 28 –April 1).

American rapper/vocalist/internet personality Brooke Candy grew up in the greater Los Angeles area, where she developed an early love of fashion and music.

Brooke whizzed into Internet fame with a raw, no-nonsense delivery, a penchant for dirty talk, and a string of outlandishly stylized, provocative music videos including the 2012 banger “Das Me”. She is notoriously known for her cameo appearance in Grimes’ hit single “Genesis, “ which gained viral success, quickly racking up millions of views, and gained her a cult following online.

The provocative artist made a couple of guest appearances on Charlie XCX’s tracks including the singles “Cloud Aura,” and “I Got It” featuring Cupcakke and Pablo Vittar.

She released her own Opulence EP in 2014 that features the popular single “Rubber Band Stacks”. The SoCal native went on to ink endorsement deals with Diesel industries and Mac Cosmetics, leading to her selling out both runs of her Mac collaboration.”