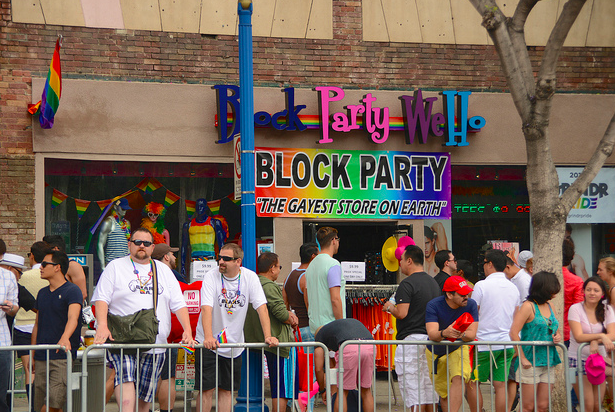 After a late night in West Hollywood’s many gay bars and clubs, patrons usually enjoy a stroll on Santa Monica Boulevard leading to the many LGBTQ+ stores the city has to offer, filled with unique t-shirts, fun knick-knacks and sex-themed novelty items.  A huge part of what sets West Hollywood apart from other late-night hot spots in Los Angeles is its gay restaurants, stores and boutiques that keep the party going. One of those stores is the one and only Block Party WeHo, which had plans to shut down last year.

With the Andrew Christian store shutting down and new restaurants and stores that aren’t specifically for a gay clientele opening in the area, talk of West Hollywood losing its gayborhood status has brought on concern. Yet Block Party WeHo, one of the city’s most iconic stores (proclaimed as “The gayest store on earth”), confirmed that it won’t be shutting down after its lease is up in a few months. The store will also carry Andrew Christian underwear and apparel on re-opening.

As the lease for Block Party WeHo was reaching its end, the store owner, Larry Block, announced that he would not be renewing his lease as an expansion for Revolver Video Bar would take its place. Although Revolver is one of the oldest and largest gay bars in WeHo, it would have still taken the place of another gay establishment.

The Revolver deal fell through and Block announced that not only is Block Party WeHo here to stay but it also may feature a cafe-like patio area in front of the store.

This good news comes after a recent poll that tied Chicago’s Boystown with WeHo for Best Gay Neighborhood of 2017 on LGBTQ+ travel site GayCities. Even with talk of WeHo changing, it still is home to many gay establishments including The Abbey, which was dubbed “The Gay Mecca.”

Although threats of West Hollywood losing its gay identity as a city are still a worry, Block assures to WEHOville that his shop will “continue to be the gayest store on earth, even gayer with Andrew Christian.”